LONDON (Reuters) – Sterling fell on Wednesday and was on track for its longest ever losing streak against the euro though it recouped some of its earlier falls in reaction to a Sky News report that Prime Minister Theresa May was about to resign. 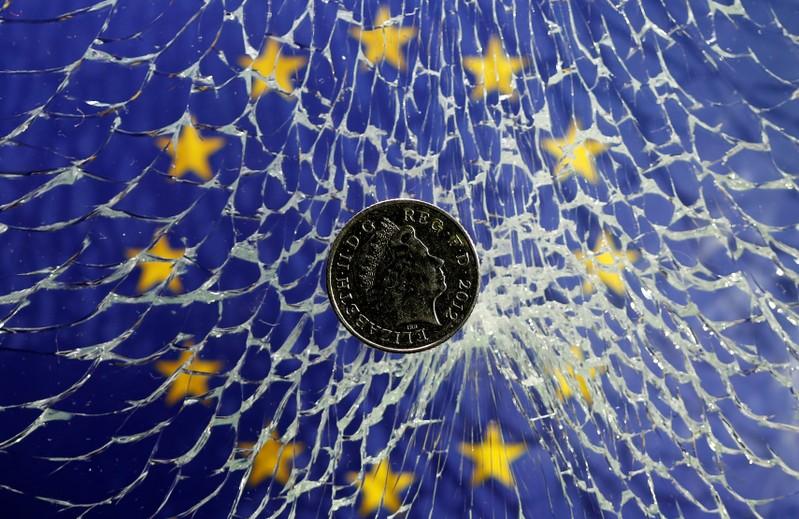 The currency had earlier plumbed four-month lows against the dollar, falling as much as 0.6% at one point as it became clear that May’s last-ditch Brexit plan had failed to win over either opposition lawmakers or many in her own party.

With the plan appearing dead in the water, some traders said they saw a rising chance of Britain leaving the European Union without a transition deal to smooth economic disruption.

It clawed back some losses after Sky News cited a lawmaker as saying May would resign later on Wednesday..

“(May leaving) would take away the uncertainty. If she goes, we can move to the next step which is the leadership contest,” said Societe General FX strategist Kenneth Broux.

“Of course, that is very short term and doesn’t guarantee the overall direction of sterling.”

“It’s a knee-jerk reaction … People are hoping a new leader could potentially unblock the Brexit deadlock but that’s not guaranteed as a new leader will face the same parliament numbers,” MUFG Securities strategist Lee Hardman said, referring to lawmakers’ refusal to endorse the EU withdrawal bill or a no-deal Brexit.

“The pound has been moving to price a no-deal but I still see potential for another 2-3% drop in the worst-case scenario.”

Sterling is meanwhile set for its 13th straight day of falls against the euro, measured by London trading prices, the longest such run since the euro began trading in 1999, according to Refinitiv data.

Hardman said he now put the probability of no-deal Brexit at 25% compared to 15% some weeks earlier.

In mid-March, banks informally canvassed by Reuters saw a diminishing chance of a “no-deal” Brexit.

Now there are signs some are changing their mind, with JPMorgan upping its probability of a no-deal Brexit to 25% from 15%. Another bank, Nordea, raised the chance of no-deal Brexit to 15%, compared to 10% in March while Mizuho strategists now see no-deal chances rising towards 50%.

“Personally, I suggest chances of no-deal (Brexit) is nearer 50% given the way things are shaping up right now. Looking for lower sterling-dollar trend to continue into the EU election and beyond,” said Neil Jones, head of hedge fund currency sales at Mizuho.

Market positioning on the pound suggested more volatility in store for the British currency. Outstanding net short positions on the pound were whittled back sharply in recent weeks when hopes grew that May could secure a deal.

Sterling jumps on hopes for Brexit breakthrough before vote

Extension of Brexit transition would not solve the problems – German minister