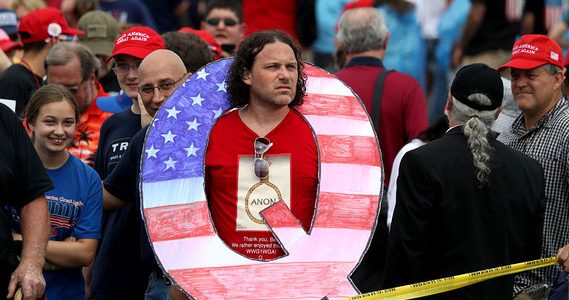 The reviews are in:

“Shallow writing for the gullible” — Dellem.

Yet “QAnon: An Invitation to the Great Awakening,” a book pushing wacky conspiracy theories, has become an AmazonAMZN, -0.05%best seller, cracking the top 75 among books sold on the site in recent days, according to NBC News.

The book, which says it was written by a dozen “anonymous Q followers, decoders and citizen journalists known collectively as Where We Go One We Go All (WWG1WGA),” claims that Democrats murder and eat children and that the government created AIDS, polio and Lyme disease. Then there’s the belief that the world is run by a Satanic cabal led by Hillary Clinton.

There’s more. So much more. But we’ll leave it there.

QAnon emerged from the dark corners of the internet and into the national spotlight thanks primarily to supporters of Donald Trump who would show up at his rallies wearing clothes and holding signs referencing the “Q” conspiracy.

Mike Rothschild, a conspiracy-theory expert, told NBC that the book is just another way for the QAnon movement to cash in on its gullible followers, calling it “a bold new step in the endless grift at the heart of Q.”

Nevertheless, the book keeps selling and racking up questionable glowing reviews, which Jason Kint, CEO of the trade association Digital Content Next, chalks up to manipulation and the lack of oversight on Amazon’s part.

“To be clear, they absolutely shouldn’t be censoring the availability of books like this,” Kite explained to NBC. “But the fact we’re left only with the publisher’s own description of the book and a clearly gamed set of 5-star reviews — how is the average shopper supposed to know this is toxic garbage?”

Investors have misdiagnosed Amazon’s push into the pharmacy business