The vaccines from Pfizer, Moderna and AstraZeneca have pulled forward the expected timetable of global economic and financial recovery by roughly a month to six weeks. They reduce the period of maximum damage to the productive base of the economy, and therefore lower the risk of dangerous metastasis. The mere prospect of vaccines amounts to economic stimulus. It lifts output through confidence channels and helps to unlock frozen investment.

The breakthroughs are a superb scientific achievement. Ten years' work has been packed into 10 months. 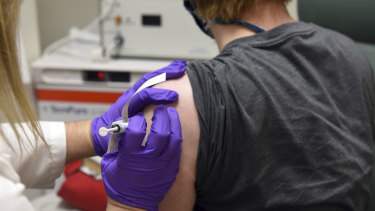 A vaccine will not avert a certain double-dip recession in Europe, or a partial double-dip in America, or clear away the legacy cost of soaring corporate and public debt ratios.Credit:AP

Yet the vaccines come too late to stop Wave Two of COVID-19 sweeping through the G7 economic bloc this northern hemisphere winter. They will not avert a certain double-dip recession in Europe, or a partial double-dip in America, or clear away the legacy cost of soaring corporate and public debt ratios.

Nor do they change the market calculus significantly. Most banks and hedge funds had already priced in a successful vaccine for early 2021. Equity investors have already pocketed much of the implied relief.

Bank of America's latest survey of global fund managers shows that cash allocation levels have dropped to 4.1 per cent, typically a sign of market froth and an amber warning. Morgan Stanley's stock guru Michael Wilson thinks equities face a 10 per cent correction before a boom next year – a rotation phase will see tech stocks knocked further off their perch and favour the unloved laggards: energy; the Russell 2000 small-cap stocks; or beaten-down emerging markets such as Latin America.

It is true that American firms and households have built up $US3.5 trillion ($4.8 trillion) of extra bank savings and liquid assets since COVID hit. A wall of money is likely to flood into the economy as soon as life returns to normal.

The International Monetary Fund fears that a second leg of the downturn could morph into something nastier, with defaults setting off contagion that rips through "the entire financial system".

But set against vaccine euphoria is political-ideological gridlock. The US has to get through a raging pandemic and the closing Götterdämmerung of Trumpism, and do so without adequate fiscal and monetary shock-absorbers. Congress has failed to agree on stimulus. There may yet be a skinny deal but it will be closer to the $US500 billion Republican offer than to the $US2 trillion Democrat demand.

The Trump administration is stripping the Federal Reserve of its Article 13 emergency lending powers, chiefly in order to stop Joe Biden using the mechanism to bail out insolvent US state and local governments.

Biden's grand reflation plan is dead. The Senate will not finance the green deal or his "war economy".

The Republicans have rediscovered fiscal sobriety and will put the Biden administration on an austerity drip-feed, as they did to Barack Obama after he lost control of Congress in 2010. This time, the Fed cannot easily plug the gap. Chairman Jay Powell may want to "run the economy hot" but he lacks the means to do so. 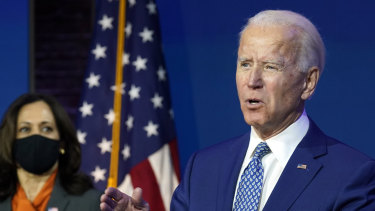 Joe Biden will face a number of challenges to get the US economy back on track. Credit:AP

The Fed is reaching the limits of useful QE and yield curve manipulation. It will struggle to offset fiscal drag with monetary stimulus under its legal mandate. The only way that it can pack a counter-recessionary punch at this juncture is to finance federal government spending by mopping up treasury issuance. That is why Powell says more fiscal stimulus is "absolutely essential".

Biden is a man of the Senate and may yet find ways to lure Republicans to his side. The US economy will probably muddle through thanks to pent-up private spending and the animal dynamism of American capitalism, but I doubt that we will see a Biden boom.

The much greater problem is Europe. IHS Markit's composite PMI indicator for France crashed to 39.9 in November and the eurozone is again in deep contraction. IHS thinks the bloc will regain no more than half of the lost GDP by the end of next year. This level of damage risks a cascade of insolvencies and slow-motion banking crisis. The European banking regulator has warned of €1.4 trillion ($2.3 trillion) of bad loans in a "plausible scenario" and expects a brutal recapitalisation of broken lenders.

The International Monetary Fund fears that a second leg of the downturn could morph into something nastier, with defaults setting off contagion that rips through "the entire financial system".

But it is not just the banks that need a systemic bailout. The Banca D'Italia says swathes of Italian companies have exhausted borrowing limits and will need large injections of capital. The Italian state has issued credit guarantees equal to 32 per cent of GDP.

When the premier Giuseppe Conte waved his magic wand and underwrote this debt in the spring, it was assumed that the lockdown would be one-and-done. He probably had no idea that eight months later, the country would again be shut down and that these theoretical liabilities would start to become uncomfortably real.

Europe's economic woes are not because Poland and Hungary are holding the EU Recovery Fund hostage over "rule of law" clauses, but because the fund is too small, too slow, and was never going to move the macroeconomic needle much.

The €390 billion of grants will not kick in seriously until late 2021 and will then be spread thin, adding little net stimulus.

The loan component of the fund is still-born because the Troika-scarred countries that need money most will not accept the conditions and they fear that extra borrowing will push their debt ratios closer to the point of no return. There is no permanent debt mutualisation. At the end of the day, these countries will again be on their own and vulnerable to potential default.

Vaccines are a necessary but insufficient condition for a full European recovery. The eurozone desperately needs a giant New Deal package, raised on the joint credit card, worth trillions, and mobilised immediately. That is what the Recovery Fund purports to be but is not.

Scientists can do wonders but they cannot repair broken political economies.