Home » Economy » To work or not: weighing up a comfortable retirement

To work or not: weighing up a comfortable retirement

I receive a Commonwealth Super Scheme defined-benefit pension of $46,000 per year, paid fortnightly. My wife will shortly retire on an annuity of $30,000 per year from $320,000 held in Catholic Schools Super Fund. How are these pensions counted in applying for a part pension, i.e. as income or assets? I am 70 and my wife is 69. I do casual work for about seven weeks a year earning about $10,000 and wonder if it would be worthwhile giving this away, as it would obviously affect our eligibility for a part pension.  R.S.

Your defined-benefit pension is ignored by Centrelink’s assets test, while the income test counts the gross payment less the “deductible amount”, which is basically a return of your after-tax contributions. The deductible amount cannot exceed 10 per cent of your pension. 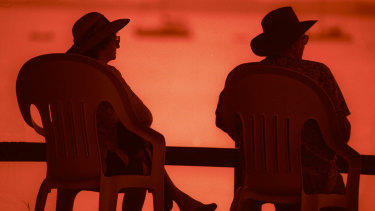 If you are enjoying your work, you will be much happier continuing this rather than queuing up for a part age pension when you fully retire.Credit:

Catholic super can be a little confusing. There is no “Catholic Schools Super Fund” but instead two funds – Catholic Super and Australian Catholic Superannuation & Retirement Fund.

I suspect your wife is in the latter fund which, apart from a standard allocated pension with multiple choices, offers a simplified allocated pension which it calls “RetireSmart”. This pays the retiree’s pension from a cash fund, which initially contains twice the chosen annual pension, or $60,000 in your wife’s case.

Her remaining $260,000 goes into a growth fund, from which money is transferred to top up the cash account regularly.

She can request a pension of up to 20 per cent of her fund and I see she is taking almost 10 per cent, although the minimum required by law is only 5 per cent. I prefer to take as low a percentage as possible to make the money last.

If you are enjoying your work, you will be much happier continuing this rather than queuing up for a part age pension, and you’ll probably have more money in your pocket, given that you are not likely to be close to the income test cutout threshold of $80,610 a year, to be indexed up on September 20.

As you plan to retire at 62, we can estimate that you would go through some $1.65 million if you index withdrawals of $85,000 a year to two per cent inflation and live 27 years, being a man’s life expectancy of 22 years plus a further five.

Excluding the investment property in which you plan to live, the other three properties are valued at $2.75 million, offset by your Sydney debts of $1.51 million in 2019 and Brisbane debts estimated at $1.1 million in four years’ time, all of which makes it hard to compare at this moment in time, although I suspect you are negatively geared.

If your incomes are evenly divided, you should together be bringing in about $150,000 a year after tax and super contributions, reduced further by top ups into your mortgages.

If in fact you are able to accumulate about $1.1 million in super by 2023, and are able to sell your Brisbane properties, possibly singly over time, and add $500,000 to your savings, you could cover your costs in retirement. Since it appears that your Brisbane investments are currently under water, that doesn't seem likely in the foreseeable future.

Ultimately, I think you need some professional advice from someone in possession of all your figures. Without knowing these, I would say there’s a couple of things you could do.

You could tighten your current budget and see how much you can save before retirement.

You could sell and move to your investment property now, and save considerably on mortgage costs before retirement, and you could plan to work to age 65 or even 70, if you want to maintain a high living standard in retirement. Otherwise, trim your planned retirement spending.

I am a self-funded retiree, 90 this month, with a terminal illness, emphysema, and no relatives in this country. I made a Will leaving most of my estate to the NSW RSPCA, who are executors. Unfortunately, I met a solicitor who told me he worked for the RSPCA and gave him Power of Attorney and Enduring Guardian. He asked me if he could put a certain paragraph at the end of the Will, allowing him to charge and execute same and I agreed, not knowing the amount he could charge. I told the RSPCA and gave them a copy of the Will and suggested they redo it and cancel the last paragraph, but they said no, let it be. What do you advise? I have assets of over $1.1 million.  E.R.

I suggest you have two choices. If you are implying that the RSPCA are familiar with, and have trust in your chosen solicitor, then you can simply request that the solicitor give you a quote for his services and have this included in an additional sentence or paragraph (known as a codicil) to your Will. This should eliminate your fears.

However, if you’re not happy, the obvious thing is to prepare another Will using a different solicitor, although, once again, request a quote and insert this in your new Will. The RSPCA can’t do it.

As background, a professional such as a lawyer or accountant would expect to be paid. You can do this by including a clause in your Will (as above), or if your beneficiary (the RSPCA) agrees to it, or the executor can submit a claim to the Supreme Court, for a commission to cover what is described in the law as an “administrator’s…pains and trouble as is just and reasonable”.

One should note that, in this industry, commissions have not been banned.

'A truth which must not be spoken': what's really happening to prices

Not a super way to engage young workers

Are you swimming in debt? Here’s a four-step strategy to pay it off

Fast payments off to a slow start