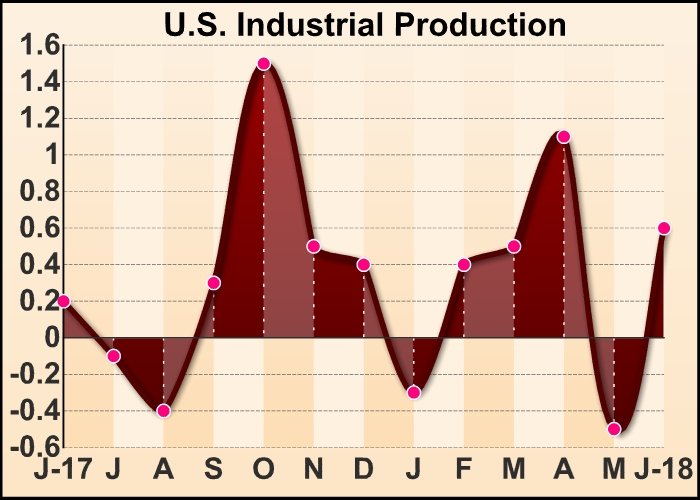 U.S. Industrial Production Rebounds In Line With Estimates In June

Partly reflecting a rebound in auto production, the Federal Reserve released a report on Tuesday showing industrial production in the U.S. increased in line with economist estimates in the month of June.

The Fed said industrial production climbed by 0.6 percent in June after falling by a downwardly revised 0.5 percent in May.

Economists had expected production to increase by 0.6 percent compared to the 0.1 percent dip originally reported for the previous month.

The Fed said the production of motor vehicles and parts rebounded last month after truck assemblies fell sharply in May because of a disruption at a parts supplier.

Excluding the rebound in auto production, manufacturing output increased by a much more modest 0.3 percent during the month.

The report said mining output also jumped by 1.2 percent in June after spiking by 2.2 percent in May, reaching a new historical peak.

On the other hand, utilities output slumped by 1.5 percent in June after falling by 0.7 percent in the previous month.

The Fed also said capacity utilization in the industrial sector edged up to 78.0 percent in June from a downwardly revised 77.7 percent in May.

Economists had expected capacity utilization to rise to 78.3 percent from the 77.9 percent originally reported for the previous month.