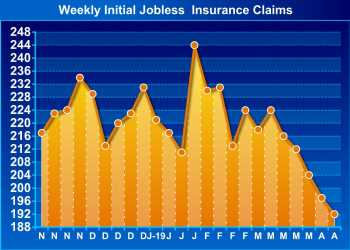 First-time claims for U.S. unemployment benefits unexpectedly edged lower in the week ended April 13th, according to a report released by the Labor Department on Thursday, with jobless claims falling to a nearly 50-year low.

Economists had expected jobless claims to rise to 205,000 from the 196,000 originally reported in the previous week.

With the unexpected decrease, initial jobless claims dropped to their lowest level since hitting 182,000 in September of 1969.

Continuing claims, a reading on the number of people receiving ongoing unemployment assistance, also tumbled by 63,000 to 1.653 million in the week ended April 6th.