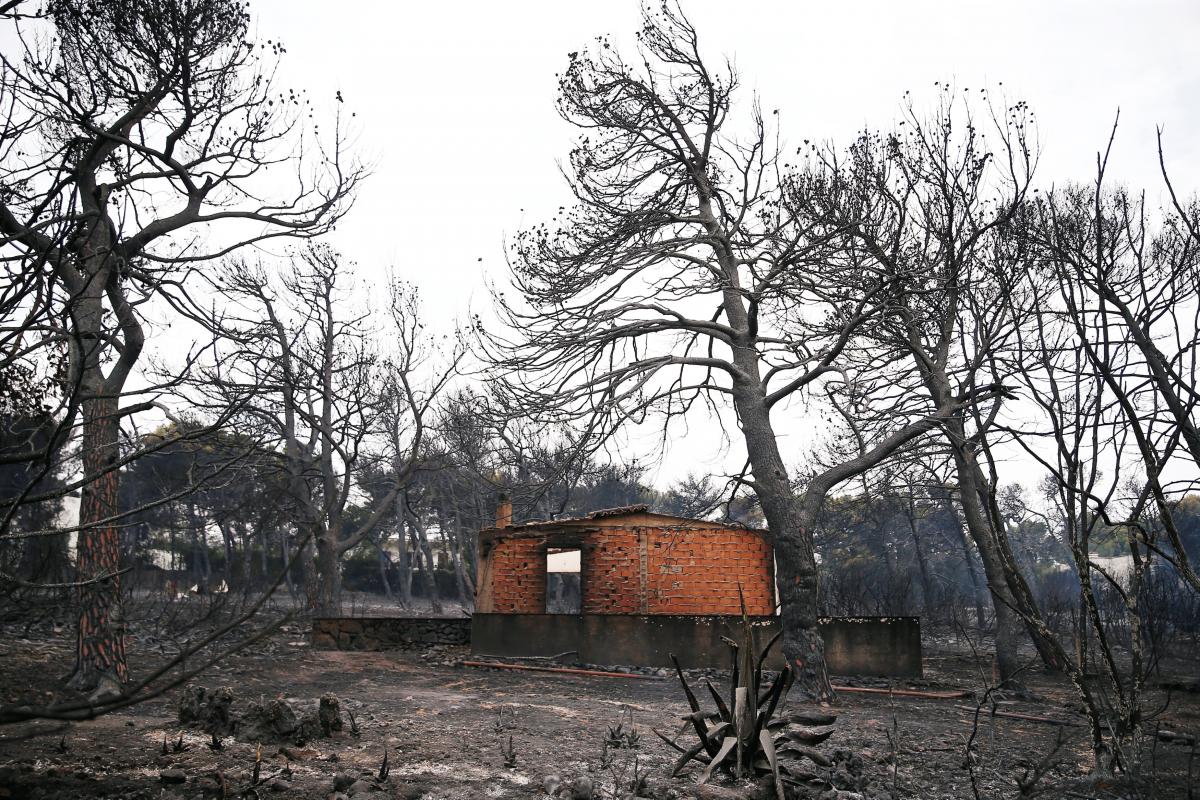 Wildfires kill at least 60 near Athens, families embrace as flames…

MATI, Greece (Reuters) – Wildfires sweeping through a Greek resort town killed at least 60 people, officials said, including families with children found clasped in a last embrace as they tried to flee the flames.

The inferno was by far Greece’s worst since fires devastated the southern Peloponnese peninsula in August 2007, killing dozens. It broke out in Mati, east of Athens, late Monday afternoon and was still burning in some areas on Tuesday.

“Greece is going through an unspeakable tragedy,” Prime Minister Alexis Tsipras said as he appeared on television to declare three days of national mourning.

Emergency crews found one group of 26 victims, some of them youngsters, lying close together near the top of a cliff overlooking a beach.

“They had tried to find an escape route but unfortunately these people and their kids didn’t make it in time. Instinctively, seeing the end nearing, they embraced,” Nikos Economopoulos, the head of Greece’s Red Cross, told Skai TV.

The strong smell of charred buildings and trees lingered in the air in parts of Mati on Tuesday, where white smoke rose from smoldering fires.

Residents wandered the streets, some searching for their burned-out cars, others for their pets. The eerie silence was punctured by fire-fighting helicopters and the chatter of rescue crews.

A Reuters photographer saw at least four dead people on a narrow road clogged with cars heading to a beach.

“Residents and visitors in the area did not escape in time even though they were a few meters from the sea or in their homes,” fire brigade spokeswoman Stavroula Maliri said.

Coastguard vessels and other boats rescued almost 700 people who had managed to get to the shoreline and pulled another 19 survivors and six dead bodies from the sea, the coastguard said.

In total, at least 60 people were killed and the death toll was expected to rise, Evangelos Bournous, mayor of nearby Rafina-Pikermi, said.

It was unclear how many people remained unaccounted for as coastguard vessels combed beaches to find any remaining survivors, with military hospitals on full alert, the government’s spokesman said.

A burned house is seen following a wildfire at the village of Mati, near Athens, Greece July 24, 2018. REUTERS/Costas Baltas

One of the youngest victims was thought to be a six-month-old baby who died of smoke inhalation, officials said. Of the at least 94 people injured, 11 were in intensive care, and 23 were children, they added.

Mati, 29 km (18 miles) east of the capital, is a popular spot for Greek holiday-makers, particularly pensioners and children at camps. Poland said two of its citizens, a mother and her son, were among the victims.

Greece’s fire brigade said the intensity and spread of the wildfire at Mati had slowed on Tuesday as winds died down, but it was still not fully under control.

The service urged residents to report missing relatives and friends. Some took to Twitter and Facebook, posting photographs of young children and elderly couples they hoped to locate.

Greece issued an urgent appeal for help to tackle fires that raged out of control in several places across the country, destroying homes and disrupting major transport links.

“Our thoughts go to Greece and the victims of the terrible fires,” French President Emmanuel Macron said in tweets published in French and Greek. Forest fires are also raging in Sweden.

Authorities said they would use an unmanned drone from the United States to monitor and track any suspicious activity.

Tsipras and Greek officials have expressed misgivings at the fact that several major fires broke out at the same time.

Wildfires are not uncommon in Greece, and a relatively dry winter helped create the current tinder-box conditions. It was not immediately clear what ignited the fires.

A hillside of homes was gutted by flames east of Athens. A mayor said he saw at least 100 homes and 200 vehicles burning. 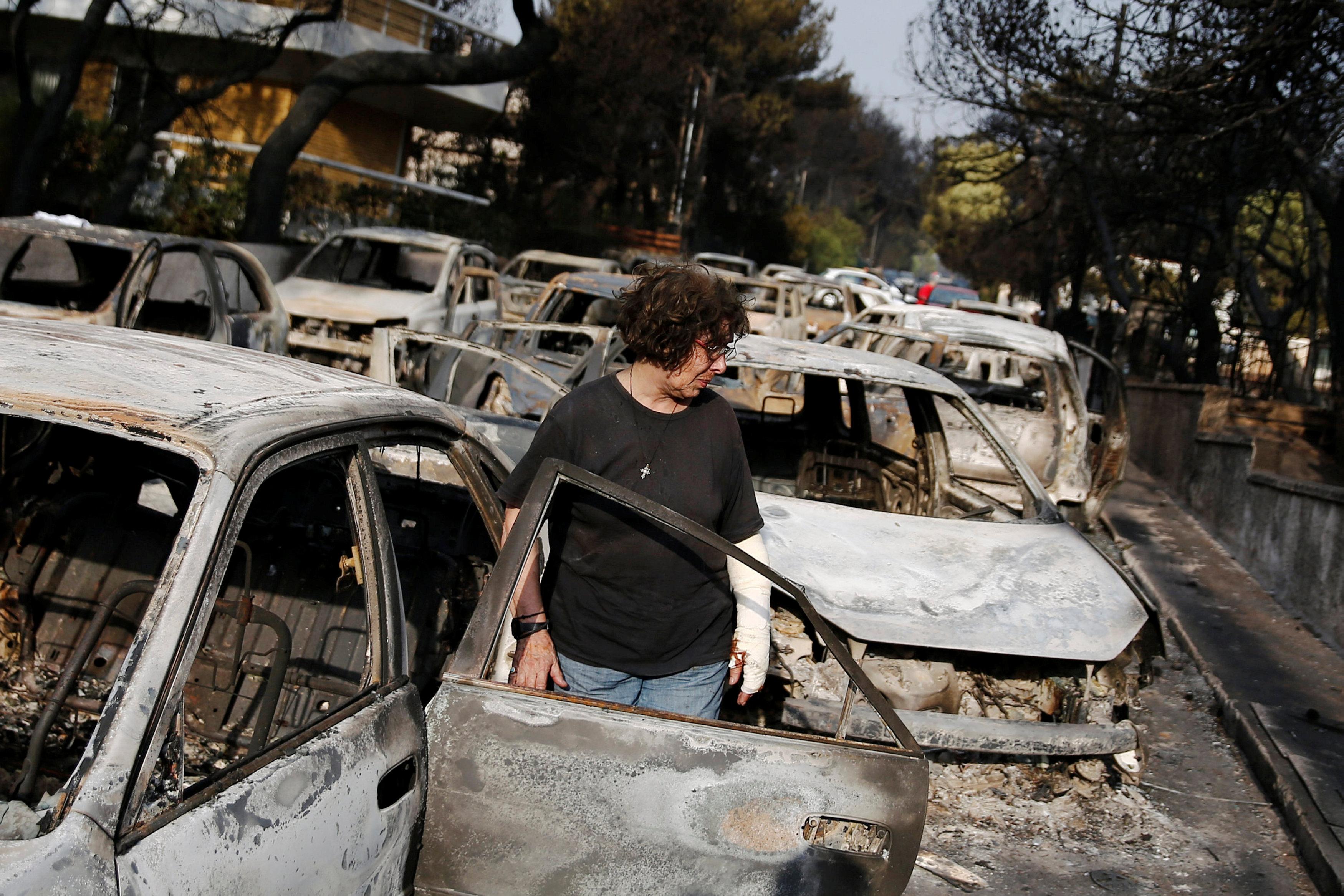 On Monday, Greek authorities urged residents of a coastal region west of Athens to abandon their homes as another wildfire burned ferociously, closing one of Greece’s busiest motorways, halting trains and sending plumes of smoke over the capital.