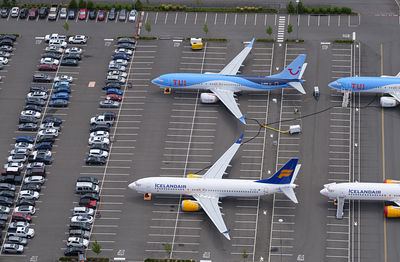 Boeing Co. is expected to report second-quarter earnings before the bell Wednesday as the aircraft maker’s stock continues to show resilience against the 737 Max fallout.

The planes were grounded world-wide in March following two fatal crashes, less than five months apart, that were linked to a faulty antistall feature.

The shares rallied on Friday as investors took it as good news that Boeing was putting a relatively paltry initial price tag on the 737 Max issues.

Wall Street also liked that the company said the planes would likely return to service by the fourth quarter, when in some circles the fear is early 2020.

Here’s what to expect:

Estimize, a crowdsourcing platform that gathers estimates from Wall Street analysts as well as buy-side analysts, fund managers, company executives, academics and others, is expecting profit of $1.94 a share.

Stock movement: Boeing shares have gained 17% this year, matching gains for the Dow Jones Industrial Average DJIA, -0.25% of which Boeing is a component.

Shares gained in the past two months after chalking up steep monthly losses in March, April and May.

What else to expect: Boeing may have set a timeline for a return to service for the 737 Max planes, but there’s much that it hasn’t said, notably when the Max software fix will be ready to be installed and how long it will take to retrofit the aircraft.

It also hasn’t estimated costs with compensation for the families of victims of the two crashes. It has pledged $100 million in financial support to the families. The crashes, one into the Java Sea near Indonesia in October and one in Ethiopia in March, claimed the lives of 346 people.

Boeing could detail whether it expect trade tensions to weigh on its bottom line for the year. No fewer than nine companies have done so already, including Honeywell International Inc. HON, -0.51% and CSX Corp. CSX, -2.12%

Boeing didn’t update its guidance when it reported first-quarter results in April, saying that the uncertainty was too great. It is unlikely that it will do so next week.