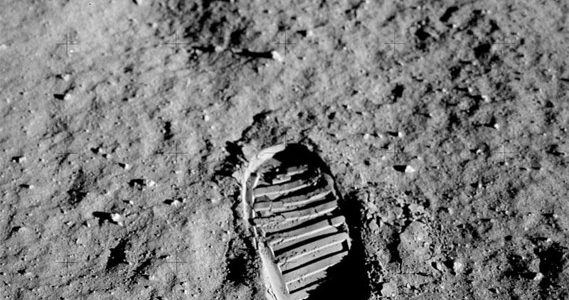 The summer of 1969 is a cliche place to begin a story. But there are good reasons for doing so.

The other side of the world was equally ablaze. Richard Nixon’s team was pulling the first U.S. troops out of a worsening Vietnam quagmire. The Chinese were busy with a nasty border war with the Soviet Union, which became a seven-month skirmish that resulted in the divorce of the world’s two biggest communist states. A North Korean MiG shot down a U.S. Navy plane, killing 31 Americans.

It was a time of unsettling change.

Forgotten amidst all this turmoil were the women and men of NASA who had been heads-down in Houston, Florida and California preparing to send three impeccably trained pilots 250,000 miles into the vacuum of space — to Earth’s cratered sidekick, which offered sudden death if the slightest hitch were to spring up. Forgotten, that is, until the moon appeared on black-and-white TVs showing American ingenuity delivering these men onto the dusty lunar surface.

Though that historic achievement was largely driven by the grim motivations of military supremacy, it was a spectacular high-water mark of U.S. technological prowess.

Though the country’s space program dates back to the 1950s, its graduation into the cosmological big leagues began when it became the third country to launch a human into space in 2003. Since then, it has evolved into a powerhouse. In 2018 it successfully conducted more orbital launches than any other country in the world — 38 to NASA’s 34, and with a space budget that’s a fraction of America’s.

A year ago this month, it made the first-ever soft landing on the far side of the moon, carrying the Yutu-2 lunar rover, which just became the longest-operational moon rover ever.

Largely excluded from the multinational space collaborations of the U.S., Europe and Japan, China plans to complete its own manned space station in two years, around the time the International Space Station will be retired.

Its 2020 plans, announced last week, are its most ambitious yet — with economic, military, communication and navigational objectives.

And it’s not just the government in Beijing dominating the show anymore.

“The truly commercial Chinese space program has been taking off at last,” Jonathan McDowell, a leading astrophysicist at the Harvard-Smithsonian Center for Astrophysics, told MarketWatch. “I think the new ambitions of the Chinese government space program and the new maturity of the Chinese commercial space sector combined to make this a transformational era in China’s space.”

In China’s now-traditional rapid-growth fashion, the number of private companies approved to operate in the space industry jumped from 30 in 2018 to nearly 100 now, according to China Space News.

Beijing only began formally allowing private investment in commercial space companies in 2014, and it still employs strict rules around them. But the government has begun encouraging private investment and has offered access to facilities and launch sites. Yet, again in particularly Chinese fashion, the state’s degree of coziness with these firms remains opaque.

“The line between ‘civil’ and ‘military’ is markedly different in China than the U.S. or the rest of the Western world,” John Horack, who holds the Neil Armstrong Chair in Aerospace Policy at Ohio State University, reportedly told SpaceNews.

Most of these startups are steering clear of competing with Beijing’s grander missions that have military or deep-space ambitions. The private companies seem to focus largely on efficient, low-cost technologies like microsatellites, reusable rockets, and budget transport services.

Investment in China’s commercial space sector was around $600 million to $900 million in the years 2014–18, with the bulk of that coming in the last two years, according to the U.S. government-funded IDA Science and Technology Policy Institute. Besides funds steered by local-level governments, IDA found that most of investment in the sector came from private venture-capital funds and from individuals. Though there are several publicly listed Chinese commercial space-industry companies, the majority remain unlisted — though several reportedly told IDA they had aspirations to eventually issue IPOs.

China’s sector is not yet as lucrative or mature as that in the multibillion-dollar U.S. and European markets, which had significant head starts. And few expect a Chinese upstart to give SpaceX, led by TeslaTSLA, +1.93%Chief Executive Elon Musk, a run for its money any time soon. But the Chinese companies’ capabilities — and financial attractiveness — are growing, and, depending on emerging business models for space-related commercial initiatives, they could become fruitful targets for astute investors.

Tanner Brown is a contributor to MarketWatch and Barron’s and producer of the Caixin-Sinica Business Brief podcast.