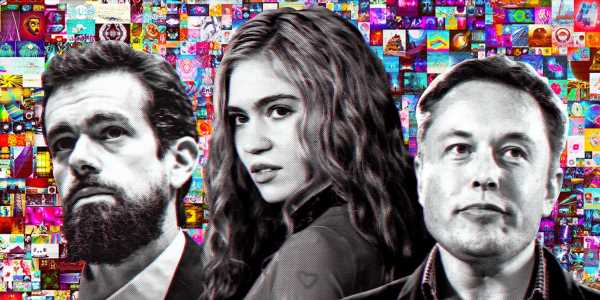 Non-fungible tokens, or NFTs, have soared in popularity in 2021. Artwork, tweets, and news columns turned into digital art have fetched millions of dollars at auction.

In an online survey conducted in the last week of March, 59% of Americans surveyed said they believe NFTs are more than a fad, and will be “the next big thing”. Counterparts in the UK, meanwhile, were less certain, with 33% of Britons responding that its a passing fad.

18% of Americans surveyed believe the market for digital art is a bubble waiting to burst.

Still, a large percentage — 61% of Americans and 54% of Britons — view the nascent space in a positive light.

Conducted by research group Piplsay from March 29-31, the survey polled 30,390 people in the US and 6,050 in the UK to assess what people think of the latest blockchain-related digital trade.

Despite Americans believing in NFTs as potentially being here to stay, the survey revealed that 33% do not believe these are safe investment, while 41% of Britons also don’t trust in the security of NFTs.

The market for digita art secured on a blockchain first opened up in 2015, and has since gained traction. The NFT space has been boosted by support from prominent figures including Jack Dorsey, Mark Cuban, and Kings of Leon, and has moved in step with the rapidly rising popularity of cryptocurrencies.

While it is still an emerging market, that also did not prevent major brands from Taco Bell to the NBA from getting on the bandwagon.

36% of Americans and 27% of Britons surveyed think the NFT space, given its highly speculative nature, is “just another playground for the mega-rich.”

NFTs are unique digital assets secured on a blockchain. Each NFT has its own signature, which can be verified in the public ledger and cannot be duplicated.

When people buy NFTs, they gain the rights to the unique token on the blockchain, and not the artworks linked to the NFTs themselves.

The NFT market saw immense growth, with buyers vastly exceeding sellers, and has grown into a $250 million market, according to a 2020 report from L’Atelier BNP Paribas and nonfungible.com.