Home » Markets » Banks’ dividend dilemma: Can they Ponzi their way to higher payouts?

Banks’ dividend dilemma: Can they Ponzi their way to higher payouts?

ANZ chairman Paul O'Sullivan was playing it carefully when he told shareholders he understood their hunger for dividends at the same time as warning them that future dividend policy would depend on how the economy was looking and how sustainable these payments were.

His comments were made within 24 hours of the prudential regulator's decision to de-shackle the banks from its previous guidance to limit dividend payouts to 50 per cent of profit.

The good news is that banks have come through the pandemic so far with sufficiently robust capital positions that the Australian Prudential Regulation Authority has ostensibly handed them back the task of capital management. 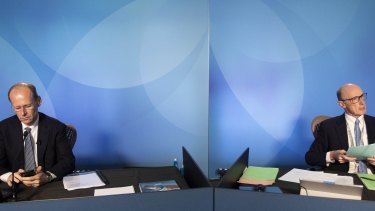 But APRA hasn’t allowed banks a completely free rein. It has firmly encouraged them to limit dividend capital leakage by encouraging payouts to be financed through dividend reinvestment programs (DRPs).

It is not a sustainable position for bank shareholders who are looking for progressive dividends.

DRPs – characterised by some as a Ponzi scheme – involve issuing new shares to pay for dividends. They are dilutionary for shareholders because for one, there are increasing numbers of shares on issue – and then these additional shares become eligible for dividends.

One only needs to follow the fortunes of NAB, which got onto this DRP dividend merry-go-round in 2015 and ultimately had to rebase its dividend in early 2020 because it wasn’t sustainable.

Of course APRA is concerned with capital strength and the safety of deposits – investor returns are not part of its bailiwick.

It will be a balancing act for banks, who understand that their share prices reflect, in part, the generosity of their dividends. They may also be reluctant to dilute shareholders.

And O’Sullivan made a feature of the fact that "in contrast to our three major Australian bank competitors, we have actually reduced the number of shares on issue over the last few years, increasing the earnings per share for you, our owners".

But banks are also keenly aware that while 2020 was a difficult year, the real test will come in 2021 when those customers on interest rate deferrals need to begin repayments on their loans or officially lapse into arrears.

To date we have not lost a single dollar in terms of credit losses resulting directly from COVID … but we have built up a substantial rainy day fund if they do occur.

The road to recovery could get bumpy.

ANZ’s chief executive Shayne Elliott made much of the fact that 92 per cent of those who deferred mortgage payments in Australia were now back on track. Similarly deferred business loans to small and medium sized enterprises had fallen fast and in the period between November to December 11, alone, had more than halved.

These rates of improvement generally reflect the positions of the other three large banks.

Yet while this is a better outcome than was anticipated six months ago or even three months ago, it will be the tail end of these deferred loans that are most vulnerable.

Elliott also boasted that while ANZ had set aside $1.7 billion to provide for future losses, "to date we have not lost a single dollar in terms of credit losses resulting directly from COVID … but we have built up a substantial rainy day fund if they do occur".

They may not be able to make that claim in six months.

It has been in the best interest of all the banks to extend the moratorium on interest. In the current ultra low interest rate environment the cost to the bank of allowing the interest rate deferrals to drag on are minor. Time is cheap when interest rates are near zero.

The banks will receive additional protection from the rising residential property market. Many mortgage borrowers that do ultimately need to sell their homes will be able to repay banks in full.

All banks will be hoping that the billions of dollars in COVID provisions won’t be needed. But it's too early to know the outcome until their support packages and those provided by the government are finished.

An interesting feature of this health/ economic crisis is that, unlike the GFC, there has been a very small number of large business collapses. To date, parts of the Grocon empire and Virgin Australia are the only two, and these have not impacted the major banks significantly.

The banks sustained billions of dollars in credit losses during the GFC when large overgeared companies and numerous property developers hit the wall.

Companies also accessed equity markets to raise additional capital to see them through the pandemic.

If the banks don’t need to make additional credit provisions in 2021, they will get a technical earnings boost. But the underlying pre-provision profit is forecast to be weak thanks to ultra-low interest rates. And this augurs well for bank dividends.