A version of this story first appeared in CNN Business’ Before the Bell newsletter. Not a subscriber? You can sign up right here. You can listen to an audio version of the newsletter by clicking the same link.

London (CNN Business)Over the past week, as markets were churning on fears that the Omicron variant could derail the global economic recovery, bitcoin prices stayed surprisingly stable. Then came the weekend.

What’s happening: The cryptocurrency at one point plunged more than 20% on Saturday. It’s now trading at roughly $48,600, down from about $57,000 at the beginning of December.
“We’re seeing that continued fear of the Omicron variant,” said Marcus Sotiriou, sales trader at digital asset broker GlobalBlock.

Proponents of bitcoin have often touted the possibility it could serve as a safe haven asset that trades independently from stocks, bonds and commodities, giving it a potential role for investors looking to balance their risks.

Yet the drop in bitcoin, which analysts linked to a broader pullback in sentiment, is a sign that the biggest cryptocurrency remains closely correlated to other parts of the market, especially as more institutions boost their exposure.

When markets pull back, investment managers offload their riskiest assets first. That makes bitcoin vulnerable, Jeroen Blokland, founder of research firm True Insights, told me.
“Bitcoin has done what you would expect it [to do] as soon as equity sentiment goes down,” he said.
The sell-off was largely driven by institutions taking profits on bitcoin before the end of the year due to a spike in uncertainty, according to Sotiriou.
“This crash in the market definitely shows us that bitcoin isn’t fully decoupled from the global markets,” he told me. “It hasn’t gotten to that stage yet where it’s big enough to hold its own.”
Step back: The CNN Business Fear & Greed Index, which tracks market sentiment, remains in “extreme fear” territory. Just one month ago, it was showing an “extreme greed” reading.
But questions about the Omicron variant have spooked investors and caused many big players to try to lock in gains for 2021. The S&P 500 has dropped more than 3% over the past two weeks, but is still nearly 21% higher so far this year.
Blokland said he doesn’t think this spells the end of the Covid-era bull market. One reason for bitcoin’s slump, he added, was thinner trading on weekend days.
“I don’t think the whole sentiment-driven rally has ended,” he said.
But the sell-off serves as a reminder to professional investors that bitcoin isn’t insulated from market fears, Blokland continued. In fact, it can be more susceptible, since the asset class is three to four times as volatile as stocks.
“The higher the volatility, the higher the drawdowns will be,” he said.

Before the Bell readers may be wondering: Are investors still worried about Evergrande, the heavily-indebted Chinese real estate developer whose potential default came under the microscope a few months back?
The answer is yes. 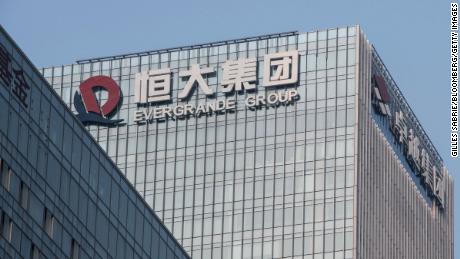 Shares of the company plummeted to a new record low on Monday as the firm once again indicated it’s in deep trouble, my CNN Business colleague Laura He reports.
This just in: The company, which has about $300 billion in total liabilities, warned late Friday that it might not have enough funds to meet its financial obligations. It faces an immediate test of its ability to repay creditors on Monday with the expiry of a 30-day grace period on interest payments on its dollar-denominated bonds.
In a raft of seemingly coordinated statements, three Chinese regulators — the People’s Bank of China, the banking and insurance regulator, and the securities regulator — said that any spillover risk from Evergrande to the property market, homeowners and the broader financial system can be controlled.
The verbal intervention appears aimed at limiting broader contagion — a longstanding concern given the outsize role of China’s property sector in its overall economy.
Still, the collapse in Evergrande shares and other property stocks weighed on Hong Kong’s benchmark Hang Seng Monday. It dropped 1.8%, hurt also by big losses in Chinese tech stocks, which slumped Friday in New York following Didi’s abrupt decision to quit Wall Street just five months after it went public there.

There’s still lots of uncertainty about the effects of the Omicron variant on public health and the global economy. But one Wall Street bank is making a call: It thinks it’s going to hurt the recovery.
Goldman Sachs had outlined various scenarios for how it could play out, including one “false alarm” scenario where Omicron doesn’t significantly impact global infections, and one “upside” case in which the variant is more infectious but causes much less severe disease, actually boosting the economy.
Yet it now sees the “downside” option, in which Omicron spreads more quickly than the Delta variant but “causes similarly severe disease,” as most likely. Over the weekend, Goldman economist Joseph Briggs said this was the new base case and downgraded the bank’s expectations for US economic growth.
The latest: Goldman Sachs now predicts the US economy will grow by 3.8% next year, down from a previous forecast of 4.2%.
It sees the Omicron variant having three main effects. It could slow the reopening of the services sector “if state governments implement policies to control virus spread or if consumers become less willing to engage in normal economic activity.” It could exacerbate supply chain problems. And it could slow the labor market comeback.
But Briggs doesn’t think the arrival of the variant will cause the Federal Reserve to change course, and still expects the central bank to announce a faster pullback of its bond-buying program at its meeting next week.