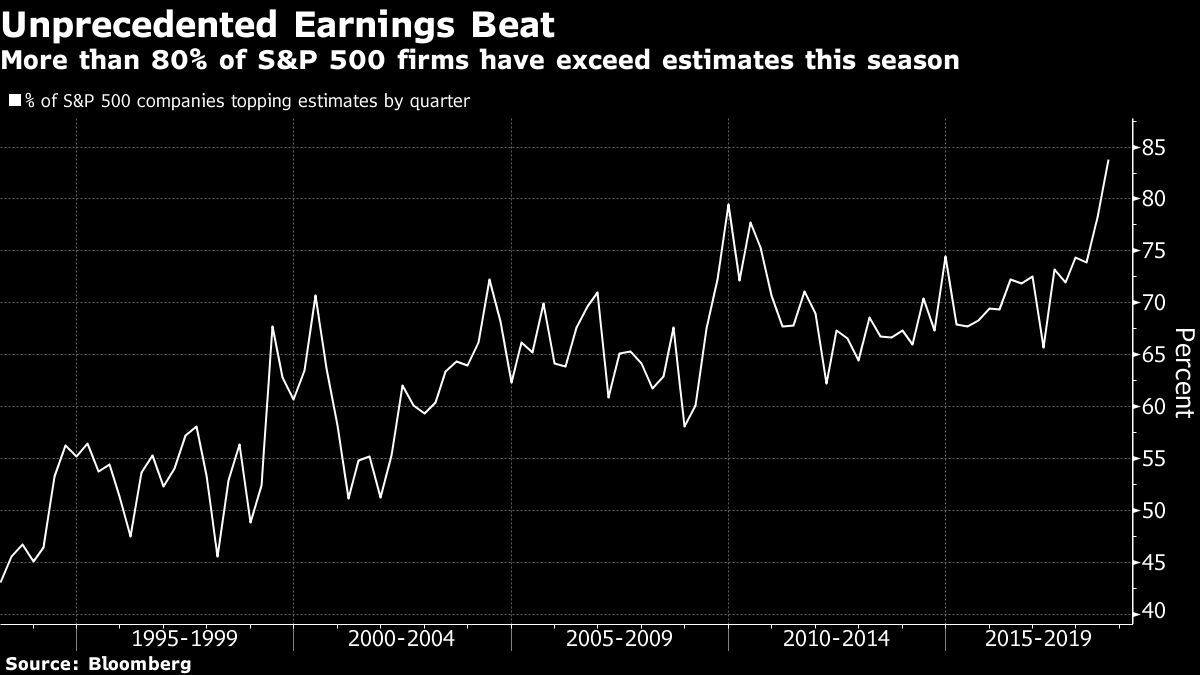 If it feels like U.S. stocks are particularly jumpy this earnings season, that’s because they are.

FromFacebook Inc.’s record plunge toApple Inc.’s 5 percent rally, first-day reactions in individual stocks to quarterly results have been more pronounced this season than any time in at least two years. At an average 3.9 percent, up-or-down swings in S&P 500 stocks are up from a mean of 3.2 percent in the last eight quarters, data compiled Goldman Sachs showed.

A lot has been made of companies outpacing analyst forecasts. But what about the forecasts themselves? It may be that Wall Street is having a harder time handicapping profits for corporate America in the months after President Donald Trump’s tax cuts went into effect.

Halfway into the reporting season, more than 80 percent of the S&P 500 companies that announced results have surpassed estimates, a rate that if sustained would be unprecedented since Bloomberg began tracking the data in 1993.

Goldman strategists say it may be a case where trends in the economy and inflation are making forecasting earnings harder than usual for analysts and companies themselves. While U.S.gross domestic product expanded at the fastest rate in four years in the second quarter, the risk of a global trade war and a Chinese slowdown was also building.

“This is a sign that the strong economic environment and accelerating inflation trends has reduced the earnings visibility for company management teams and covering analysts,” strategists led by John Marshall and Katherine Fogertey wrote in a note to clients. “This increases the instance of surprises and drives larger stock moves.”

The outbursts have been notable in both directions and, ironically, have canceled each other out. On average, shares of S&P 500 companies have risen just 0.6 percent a day after reporting, data compiled by Bloomberg showed. Industrial firms did best, climbing 2.5 percent. Tech and phone stocks suffered the biggest declines, with losses averaging at least 1.1 percent.

— With assistance by Aoyon Ashraf

The Other Earnings Season: Small-Cap ‘Zombies’ Go Nowhere But Up