Home » Markets » MORGAN STANLEY: Buy these 10 stocks quickly that will roar higher as M&A heats up – including one with a potential upside of 114%

MORGAN STANLEY: Buy these 10 stocks quickly that will roar higher as M&A heats up – including one with a potential upside of 114%

M&A is heating up and stock prices are reacting positively to several high-profile spin-offs, which offer investors an opportunity to capture healthy gains, as post-crisis corporate activity restarts, according to Morgan Stanley.

Spin-offs are the main attraction, whereby companies carve out units of a parent business into separate entities. For investors, it’s important to get that exposure now, as historically, stocks have outperformed between the announcement of a spin-off and its completion. And 62% of companies later under-perform once the spinoff has been finalized, equity strategist Matthew Garman wrote.

But, the spin-outs themselves could be hot ticket stocks, and most tend to gain more in value than their parent companies, he added. Close to two-thirds of the new companies outperform the market in the 12 months after completion by a medium average of 12%, Garman said.

So far, markets are already reacting well to spin-off announcements, with French media conglomerate Vivendi, car-manufacturer Daimler and energy company TechnipFMC are all outperforming the broader market in recent months after making statements of intent. 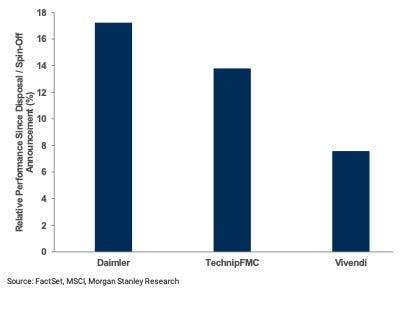 But, not all spin-offs are equal, Morgan Stanley noted, adding that the bigger the deal, the better the outperformance.

These are the top ten stocks to buy to capitalize on the increase in spin-offs and other corporate activity as the economy emerges from the COVID-19 pandemic: 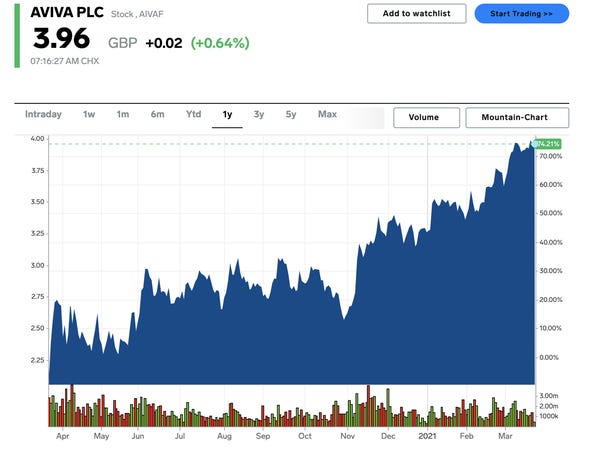 “Aviva has moved at pace on its disposal program, after announcing its intention to focus on its core operations in the UK, Ireland and Canada in 2020. Since then, Aviva has announced, or completed, disposals of its operations in France, Italy, Singapore (75%), FPIL and Turkey, raising £5.1bn in proceeds after internal loan repayments. If all announced disposals are achieved, this would give Aviva shares significant optionality, even after allowing for the targeted debt reduction.” 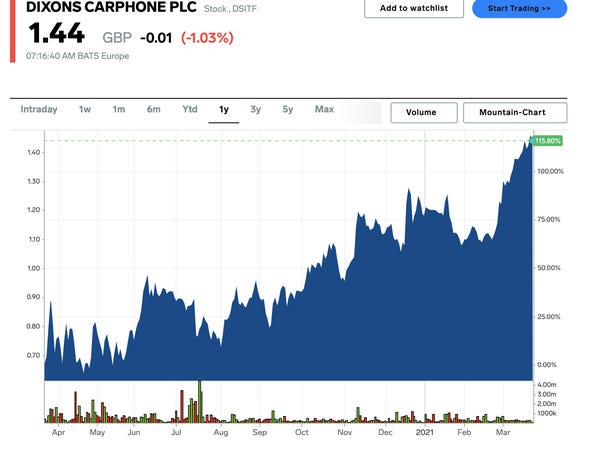 We would not be surprised if the shares re-rate ,as it becomes clear that the company is not a ‘Reopening loser’ and/or as the losses in UK Mobile begin to peter out. But M&A could prove important too. The company announced last September that it is considering a partial IPO of Elkjop, its Nordic division, which could highlight how undervalued the core UK business has become.

Elkjop has an impressive long-term track record, dominant market position and scarcity value (other than H&M, there are very few consumer discretionary stocks listed in Scandinavia) so we would expect strong interest in an IPO, if the company were to decide to go down that route.

Depending on what multiple one assumes, it is possible to create hypothetical scenarios in which the remainder of Dixons Carphone could be left looking very cheap indeed, in the event that the group decided to go ahead with an IPO of Elkjop (we believe that the UK & Ireland Electricals Division alone is likely to generate around £200m of EBIT this year, we estimate). 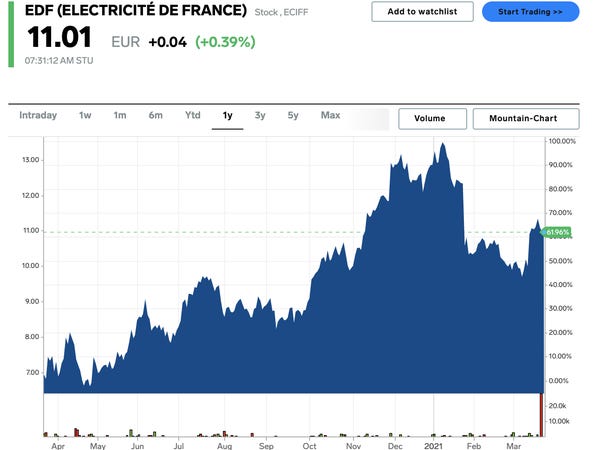 EDF is a play on the nuclear reform (Project Hercule) currently being considered by the French government. The reform would consist of a material change in remuneration mechanism for EDF’s nuclear activities, associated with a group reorganization leading to a separately listed EDF Green (a new subsidiary of EDF gathering its wind & solar, electricity distribution, retail and services activities). Assuming Project Hercule goes ahead, we would expect our bull case at €22/sh (~100% upside) to materialise for EDF shares. We assume a 30% probability of our bull case materialising (versus 50% for our base case and 20% for bear case). 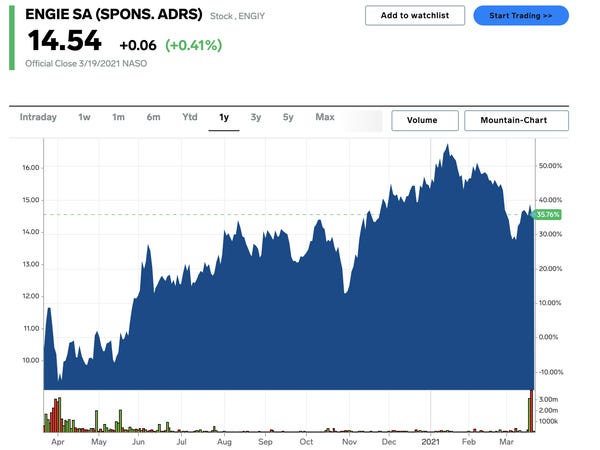 We see potential crystallisation of value through asset disposals for more than the market discounts, followed by simplification and focus in the investment case. Positive exposure to power prices will likely provide additional support, and the improved business mix with 17% of EBITDA coming from wind & solar activities by 2025e (and 54% from wind, solar & networks versus 48% in 2020) should be reflected in a premium valuation, given the lower risk/higher growth nature. Furthermore, a higher proportion of renewables should bring ENGIE into the clean energy conversation. This is not currently the case, despite the fact that ENGIE is one of the largest global developers of renewables in gross GW terms. The restructuring dynamic could therefore trigger a further re-rating as it moves towards the clean growth multiple that other integrated stocks command. 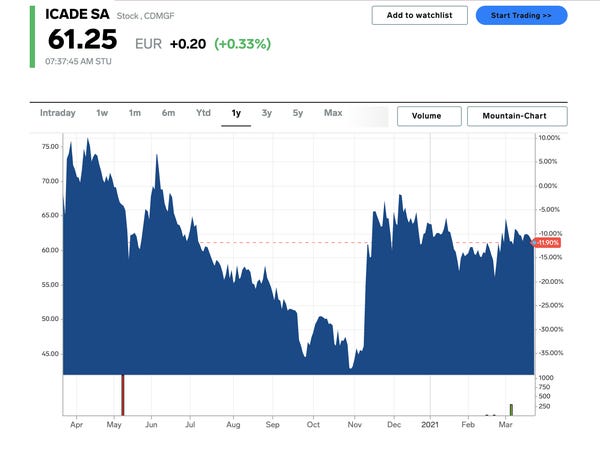 Icade’s conglomerate discount is very wide due to a sub-optimal mix: its growing healthcare business (27% of GAV) has low debt but is part owned (58%), while the parent holds peripheral Paris offices (69% of GAV) has high debt and is fully owned. Unless it can sell offices to pay down debt, this implies gradually diminishing control of earnings at the parent level, which we think (together with a weaker offices outlook) has helped drive a wide conglomerate discount. But Icade is targeting a ‘liquidity event’ for healthcare in 2022. This could clarify the value of its healthcare stake and help narrow the conglomerate discount, and – together with further office disposals to reduce leverage – drive share price upside, in our view.

Assuming a 15% premium in healthcare and a 25% discount to GAV in offices, we arrive to a target NAV discount of c.25% and therefore a price target of €69. 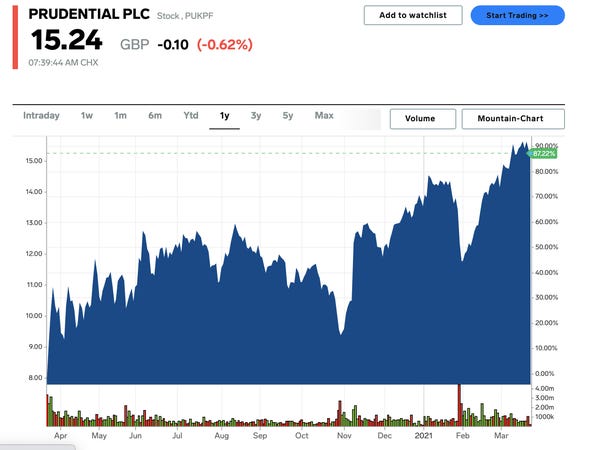 We believe that Prudential’s de-merger should lead to a narrowing of the stock’s valuation gap with AIA. Our analysis suggests that Pru, pro-forma after the intended de-merger and capital raise, is trading at an implied ~15.4x FY22e IFRS earnings – a 27% discount to AIA (covered by Jenny Jiang), its closest and only pan-Asian peer. This is despite our expectation that their EPS growth rates over FY22-25e will be similar. On a FY21e P/EV basis we see Pru’s implied multiple at 1.2.x – a 43% discount that we think cannot be justified by the differences in expected FY22e RoEV (14.1% at Pru, 14.9% for AIA). 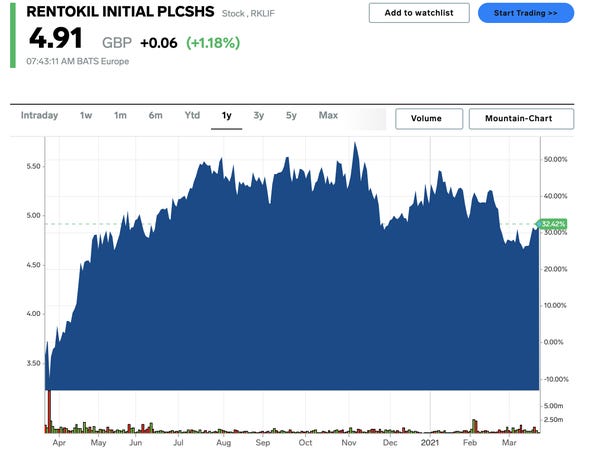 Strategic disposals of this kind for portfolio management purposes (also seen in 2014 and 2019) have cemented Rentokil as best-in-class at cash and leverage management over the past cycle.

This portfolio cleansing process may not be complete. There remain lower growth, lower margin and high capital intensity portions of the group, such as French Workwear in the Protect & Enhance segment (15% of sales, 13% of EBITA), which management has said is non core and that it may look to divest. Also within this segment for potential disposal are Ambius (commercial plant care), Property care and Dental disposal services.

While management has not commented on possible use of proceeds, a potential disposal of this business could drive material margin improvements, catalyse higher rates of acquisitions in Pest and Hygiene with the proceeds and reduce the overall capital intensity of the business, thereby driving a re-rating of the group as a whole. 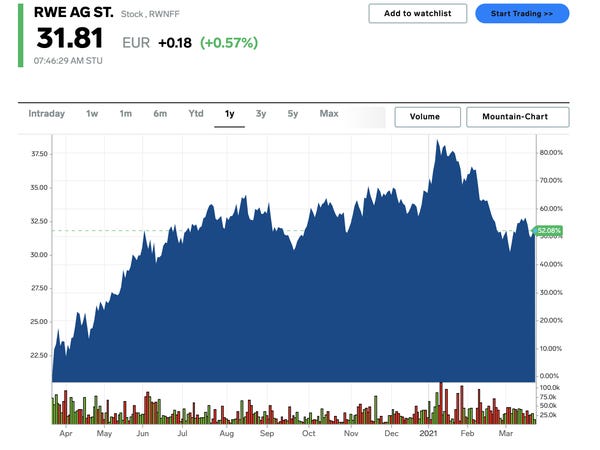 We rate RWE Overweight and expect a rebound in the stock as the macro rotation shakes out and interest in decarbonization stocks returns from April onwards. We see valuation currently discounting almost no future growth beyond existing known renewables projects, not even for disclosed pipeline and known development. We find this unsustainably cautious. In addition, RWE has positive exposure to rising carbon and power prices as part of the reflation trade, which are currently overlooked in the utilities space and act as an offset to rising yield concerns.

RWE has pre-approval from the federal government in the coal exit law, through clause 15-3, to separate its lignite activities into a foundation run by a trustee, which represents the quickest lignite option available to the company. This exit route would accelerate RWE’s transition from a majority coal exposed utility pre 2020 to almost a Renewables pure-play. 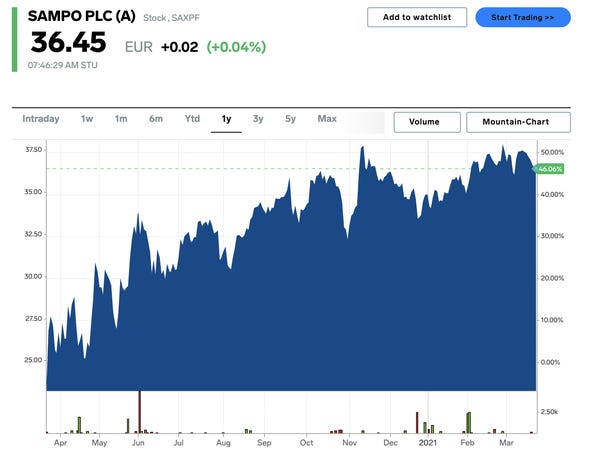 Sampo’s stake in Nordea has been a drag on its equity story, causing balance sheet and earnings volatility and resulted in Sampo cutting its dividend. At its February capital markets day, Sampo committed to materially reducing its remaining ~16% (~€5.3bn) stake in Nordea within 18 months.

We outline how this could lead to a share price of €45+. 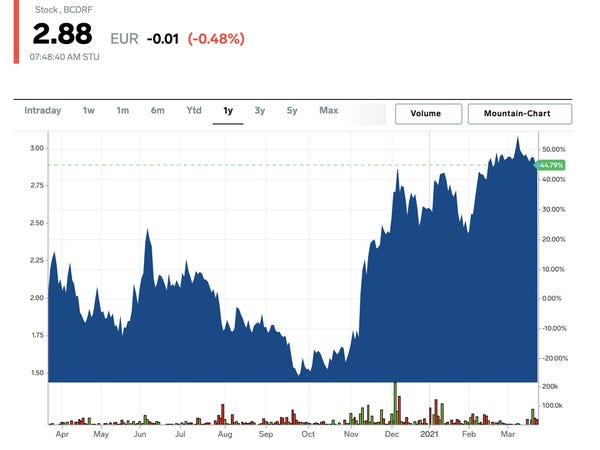 The planned listing of Santander’s Brazilian payments business, Getnet, will also increase visibility on Santander’s global payments strategy, uncovering the value of the group’s ‘crown jewel’, we believe. Getnet contributes 2.5% of group earnings, but we estimate it could be worth 6-15% of the group, based on current peer multiples. We think improved visibility will drive greater investor focus on the sum of the parts. With Santander on 7.4x PE 2022e, we are overweight the stock.