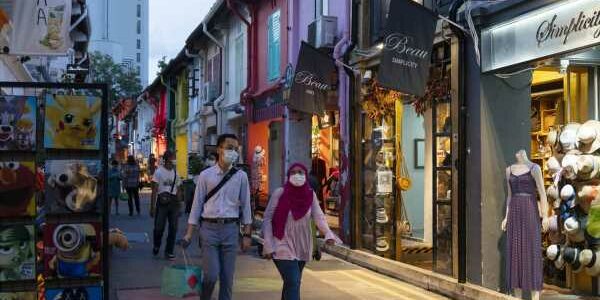 After suffering its worst economic downturn since independence, Singapore is expecting to see a rebound in 2021, Prime Minister Lee Hsien Loong said Thursday,echoing other top officials to caution that the recovery will be uneven.

“Economically, we are not yet out of the woods either, but we are beginning to see signs of stabilization,” with employment picking up and multinational firms making new investments, Lee said in a New Year’s address. “We look forward to a rebound in 2021, although the recovery will be uneven, and activity is likely to remain below pre-Covid-19 levels for some time.”

Singapore’s economy has been hammered by the global pandemic, which has slammed mainstays such as tourism and trade. Gross domestic product isexpected to contract 6% to 6.5% this year, the Ministry of Trade and Industry said in November, before growing 4% to 6% in 2021.

Fourth-quarter and full-year GDP data due Monday will likely show that a recovery that began in the third quarter continued in the final three months of the year, according to economists surveyed by Bloomberg. Despite that, the full-year contraction is likely to be the most severe since the country’s independence in 1965.

Singapore officials have said there’s still scope to providemore fiscal stimulus after pledging about S$100 billion ($75.6 billion) in aid this year. Lee hassaid he sees the government running a budget deficit at least through early 2021, and perhaps longer, to support consumers and businesses. The next budget will be released Feb. 16.

This week, Singapore became one of the first countries in Asia to administer a Covid-19 vaccine. The country has moved quickly since securing and approvingPfizer Inc. andBioNTech SE’s vaccine and will start giving shots to health-care workers, with those age 70 and older set to be vaccinated from February. Singapore also eased some social restrictions this week.

“We can now see light at the end of the tunnel,” Lee said in the speech. “But it will still take some time for enough people to be vaccinated before we are safe from another major uncontrolled outbreak.”

— With assistance by Myungshin Cho, and Tom Redmond

Dear Nirmalaji: ‘Everybody should be given a job’

The 'buy now, pay later' boom is minting a new class of billionaires
We and our partners use cookies on this site to improve our service, perform analytics, personalize advertising, measure advertising performance, and remember website preferences.Ok