Home » Markets » The potent cocktail behind the banking royal commission

The potent cocktail behind the banking royal commission

The powerful and unusual combination of a whistleblower, a politican and a top-quality investigative journalist was the recipe that eventually led to the banking royal commission, an event for subscribers to The Age has been told. 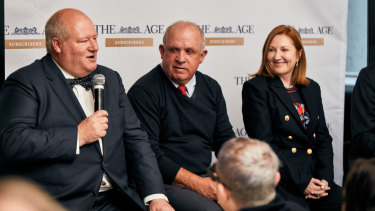 The panel explored the scandals, many of them exposed by Ms Ferguson, that have roiled the financial services sector in recent years and led to the Hayne royal commission.

"When the media and politicians team up it becomes a very powerful weapon," Senator Williams told the event.

"The combination of the media, especially Adele was a key player here with Fairfax, the whistleblowers, we've worked with many whistleblowers but there was one key whistleblower here with Jeff and a politician, where Jeff tried to meet with a politician prior to me and they didn't want to meet with you, I didn't know anything about it but we put it all together and hopefully there'll be something good comes out of this for millions of Australians for years to come."

Mr Morris said he struggled for years to get politicians and the media to take notice. 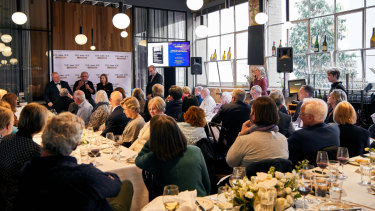 The Age reader event at Cumulus Up in August.Credit:Griffin Simm

"Adele not only wrote about it but she also persisted with it, would run stories every day for weeks and kept boing month after month, year after year, and I don't know of any other journalist in Australia who would've done that."

Mr Morris said his wife had told him he was "insane" to take on the Commonwealth Bank and the experience had taken a heavy personal toll.

He told the attendees that they were similar to the people he had met when he was working at the bank who had lost their money.

"I was told it was my job to lie to them and make their  complaint go away," he said.

"That's what motivated me at the start and that's what kept me going."

Ms Ferguson said there were encouraging signs of progress after a year of "intense scrutiny" on the sector and that the corporate regulator appeared to be taking a more aggressive stance.

"I'm still not convinced," she said.

"Whether that translates to real change in the banking sector, I don't want to say yes because we still have a long way to go."

The Story Behind the Craziest Social Security COLA Increase in History

The Numbers Behind iRobot's Improving Results

This Is the Workhorse of Intel's Technology Empire

The 6 Traits That Make a Rule Breaker
Markets
Industies News