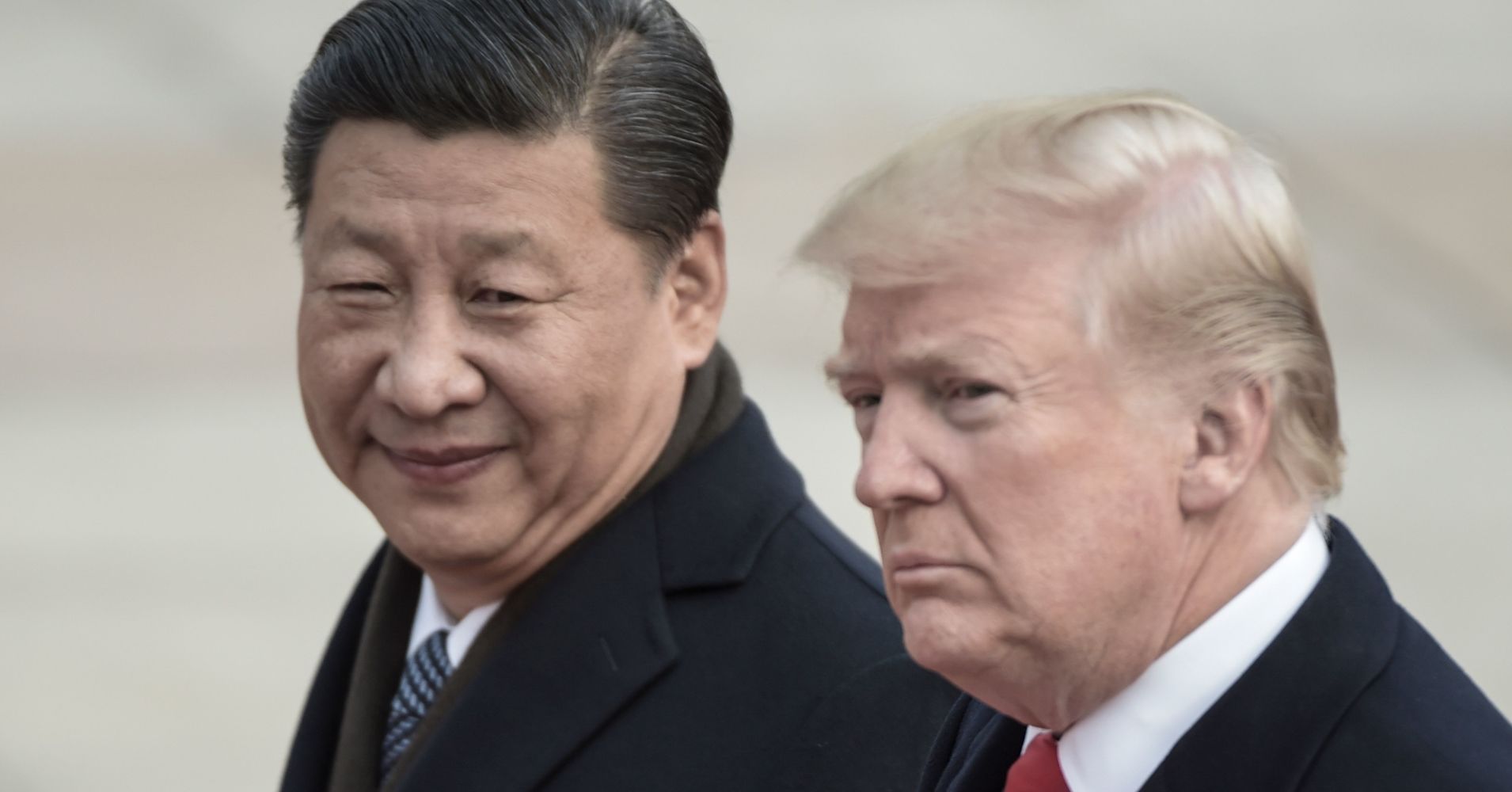 On the surface, the tit-for-tat trade war between the U.S. and China appears to be turning into a currency war.

President Donald Trump called out China and Europe Thursday and again on Friday for manipulating their currencies and keeping them low against the dollar. Hours after Trump’s comments were first aired on CNBC Thursday, the People’s Bank of China set the dollar’s reference rate at 6.7671 yuan, steering the currency 0.9 percent lower and weakening it the most in two years.

Trump followed his comments with a tweet Friday morning that criticized China, Europe and others for “manipulating” their currencies.

The dollar index, which measures the dollar against a basket of currencies, was more than 1 percent lower since Trump’s comments on Thursday. Strategists said the trade war appears to be moving toward a currency war, but whether it becomes one has yet to be seen.

“It’s starting to smell like it. We’ve had a trade war that’s been going on for awhile, and now we’re starting to hear talk about ‘you shouldn’t be doing that with your currency,” said Jens Nordvig, CEO of Exante Data.

The yuan has been weakening against the greenback both because of trade wars and due to the fact that U.S. interest rates are rising more than others, driving up the value of the the dollar. 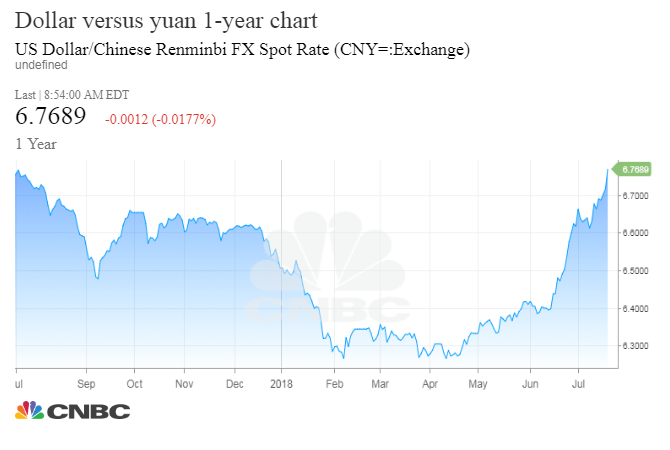 China’s central bank sets a daily exchange rate for the yuan based on recent prices, and allows trading against the dollar in a band that could be as much as 2 percent above or below that level. Strategists have said China did not seem to be intentionally weakening the currency, but it was not taking action to stop its decline, as it might have done previously. However, Thursday’s sharp adjustment looked like it was sending a message.

“It looked pretty deliberate to me it has been moving so fast,” Nordvig said. “Clearly, the currency moving this fast negates the tariffs so from that perspective it’s pretty understandable that [Trump] doesn’t like what he’s seeing.”‘ Nordvig said it will be telling to see how China deals with the currency next week.

Trump told CNBC that trade partners are “making money easy and their currency is falling.”

“In China their currency is dropping like a rock and our currency is going up, and I have to tell you it puts us at a disadvantage,” Trump said in the interview, which aired in full on CNBC’s Squawk BoxFriday.

Trump’s comments are not surprising and reflect his long held view. But they would have been unusual during other presidencies, and Trump may have opened the U.S. to fresh criticism at this weekend’s G-20 meeting in Argentina and also when the European Central Bank meets next week.

“It’s tunnel warfare between the PBOC and Trump administration at this point. They clearly have decided that the first order of business is to devalue the yuan so it will make it more difficult for U.S. exports to get to the Chinese market. It’s purely a domestic decisions,” said Boris Schlossberg, managing director, foreign exchange strategy at BK Asset Management.

Marc Chandler, Brown Brothers Harriman chief currency strategist, however, said he does not see the Chinese as intentionally antagonizing Trump. “I don’t see China doing something overtly like sticking its finger in his eye,” he said.

“Trump has turned the U.S. into a revisionist power. Now we have China defending the status quo, and the U.S. is trying to change it. I think they’ll ignore this,” he said.

Chandler does expect the administration to make an effort at some point to tweak Trump’s comments, and tone them down to make them more in line with the norms expected among the G-7 nations.

“He’ll be able to walk it back to the golden straight jacket of the G-7,” he said. “I still expect [Treasury Secretary Steven] Mnuchin to walk it back.” Mnuchin is attending the G-20 meeting in Argentina.

China’s currency moves may look dramatic, but Chandler said the PBOC may actually be trying to prevent a sharper fall in the currency in the face of trade wars and a weaker economy. China has taken recent steps to encourage more bank lending in its economy.

“If you’re a central bank, you want the currency to go the same direction as your policy,” he said. If the PBOC stepped back from the market, the currency would fall even more, he said. “China is navigating these market forces. I think they’re wrestling with these forces…I think what China was doing was minimizing its decline, keeping it orderly to prevent a repeat of the devaluation of 2015.”

“I think they were really using the fixing to try to influence where the band is, which is the maximum it could fall. I think people confuse the strategy,” said Chandler.

In fact, the comments from Trump may have helped to strengthen the yuan, he said.

“My sense is China will support this move. One of the interesting things that happens as the RMB strengthened, Chinese stocks rallied. Maybe this will be an opportunity for China to break what has been a downward spiral,” he said. He expects to see some strength Monday in the remnimbi, another name for China’s currency.

Nordvig said China wants to keep the depreciation of the yuan orderly for fear of capital flight. In fact, he said the PBOC appears to have intervened in the market in the past three days to stem the yuan’s fall, even as it set the fixing to reflect a weakening currency.

Nordvig said the situation with Europe is different. The euro is weaker against the dollar as the result of market forces, which are driven by the diverging interest rate policies between the Fed and the European Central Bank. The ECB is just winding down its quantitative easing asset purchases, while the Fed has been actively raising interest rates and rates are much lower in the EU. 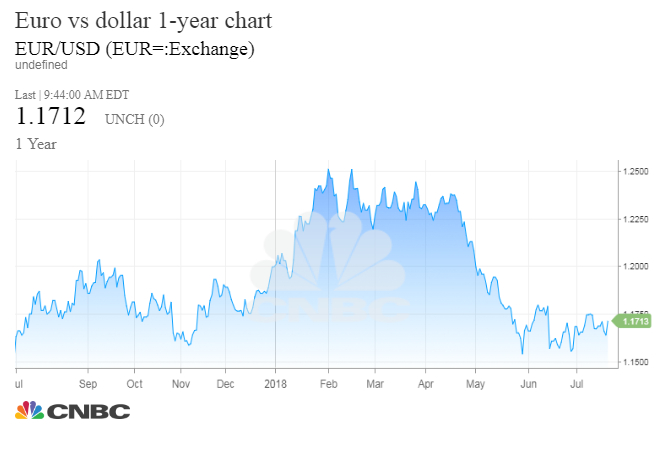 “The only way this matters for the euro is if it changes the probability of whether we are going to get tariffs on European goods,” Nordvig said.

Trump, in his comments and tweet, also took aim at the Fed, criticizing it for its interest rate policy but calling Fed Chairman Jerome Powell a “very good man.” The president also said he would not tell the Fed what to do.

“The trick is he’s also attacking the Fed. There’s some question about whether the Fed can follow through” with its rate hiking plans, said Nordvig.

So far, Trump’s comments have not changed the expectations for a next rate hike in September. But some market pros believe if trade wars begin to impact the economy, the Fed rate hikes will slow down.