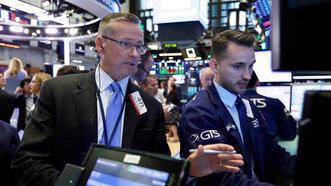 Where can investors get an edge in today’s market?

U.S. stock futures pointed to a lower open on Monday, as traders braced themselves for upcoming earnings reports while President Trump’s warning to Iran unnerved investors.

Technology stocks were particularly weak. Tesla shares took a hit following a Wall Street Journal report that the company asked suppliers to reduce costs. In response to an article in Electrek about the request, Tesla CEO Elon Musk said in a tweet that, "only costs that actually apply to Q3 & beyond will be counted. It would not be correct to apply historical cost savings to current quarter."

Meanwhile, investors were preparing for earnings from Google parent company Alphabet, which is expecting to take a hit from the European Union’s antitrust fine. The company will release results after market close.

“To Iranian President Rouhani: NEVER, EVER THREATEN THE UNITED STATES AGAIN OR YOU WILL SUFFER CONSEQUENCES THE LIKES OF WHICH FEW THROUGHOUT HISTORY HAVE EVER SUFFERED BEFORE. WE ARE NO LONGER A COUNTRY THAT WILL STAND FOR YOUR DEMENTED WORDS OF VIOLENCE & DEATH. BE CAUTIOUS!” he wrote on Twitter late Sunday.

Over the weekend, there was a meeting between finance ministers and central bankers from the Group of 20 and little progress was made when it came to trade tensions.

Economic data points due Monday include a reading on existing home sales.

Commodities were mixed, but oil was higher amid the new tensions between Iran and the U.S. and an offshore workers strike on three oil and gas platforms in the British North Sea.