Watch us grill the banks over their lending practices, ASIC chief says

Banks will be hauled into public hearings to explain their lending practises as part of the corporate regulator's plan to improve conduct in the wake of the Hayne royal commission.

Australian Securities and Investments Commission chairman James Shipton on Thursday revealed his plan to grill the banks as he outlined the regulator's strategic plan for the coming year, including its response to the banking royal commission.

Mr Shipton said a key focus for the corporate regulator would be instances where harmful practices involved vulnerable consumers. 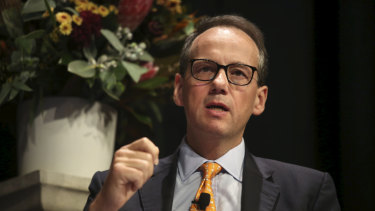 ASIC chairman James Shipton is under pressure to show he is taking action to improve banks’ business practices.Credit:James Alcock

ASIC would review its guidance for responsible lending to encourage more consistent practices across the industry.

"For the first time as part of this process, we will be holding public hearings to robustly test some of the issues and views that have been raised in submissions," he told the Committee for the Economic Development of Australia (CEDA) in Melbourne.

"I will take the opportunity here to acknowledge that while the responsible lending requirements have remained unchanged for almost a decade, and we have been consistent in our expectations of those requirements, we know house prices have declined over the past year, with fewer consumers seeking finance.

"Through any economic cycle, responsible provision of credit is critical to the long-term sustainability of the economy as well as being a cornerstone consumer protection."

On enforcement, Mr Shipton said ASIC was prioritising its investigations sparked by the 13 royal commission referrals for potential prosecution as well as its 30 case studies.

"Based on various comments from industry, it is clear that there has been some misreading of our new approaches to enforcement and supervision," he said in reference to ASIC's new 'litigate first' posture.

"The approach does not suggest ASIC will take every matter to court as the default option, or that we will pursue litigation where it would be inappropriate, or not in the public interest, to do so," he said.

"We will, in asking ourselves ‘why not litigate?’, consider a number of key factors including our model litigant obligations and the likelihood of achieving regulatory outcomes."

Mr Shipton also gave an update on ASIC's new program of continuous monitoring of the nation's biggest companies, saying his staff had been onsite in companies for a total of 119 days since the program's launch in October.

ASIC had reviewed 21 entities and over 43,000 documents as well as conducting 97 interviews with senior officers such as chief executives, chairmen, board directors, auditors and company secretaries.

'Raising the bar': Banks vow to be more ethical under new code

3 Things to Watch in the Stock Market This Week