5 Takeaways From The Second Night Of The Republican National Convention

The second night of the Republican National Convention often seemed like it was taking place in February. Maybe of 2020. Maybe of 2022. Just at some time when the coronavirus pandemic, which has killed nearly 180,000 Americans and caused the unemployment rate to spike to 10.2%, isn’t happening.

With the exception of first lady Melania Trump, who delivered her speech to a mostly unmasked crowd in the White House Rose Garden, not a single speaker referenced the massive death toll of Americans in the past six months. Several speakers, led by National Economic Council Director Larry Kudlow, spoke about the pandemic in the past tense.

More than 1,200 Americans died of the coronavirus on Tuesday.

“Business can’t endure a Biden-induced recession,” said John Peterson, the owner of a Wisconsin metal fabrication business, during his speech. “Some will struggle. Some will not survive.”

The nation is already in a recession, and has been since February.

This line ― think of how great things were before the pandemic! ― is already a common GOP talking point. But it seems unlikely to work. Public polling indicates a substantial majority of Americans blame President Donald Trump for mishandling the pandemic, and it is typically among the most important issues for voters, tied with the economy and health care.

And even in February, a strong economy was not enough to power Trump to a polling lead. His Democratic rival, former Vice President Joe Biden, has consistently led Trump in public polling since he entered the race, even when economic growth was substantially stronger than it was now.

Republicans have occasionally used the convention to highlight elements of Trump’s coronavirus response, including having him talk with coronavirus survivors and first responders on Monday night. It’s a noticeable departure from their campaign advertising, which has essentially pretended there is no pandemic.

The attempt to throw COVID-19 down the memory hole matches Trump’s broader tendency to wish the pandemic away. And it may work on his fellow Republicans: A Pew Research Center survey in late June found that 61% of Republicans believed the worst of the coronavirus outbreak was “behind us.” But only 40% of adults said the same, while 59% said the worst was yet to come. 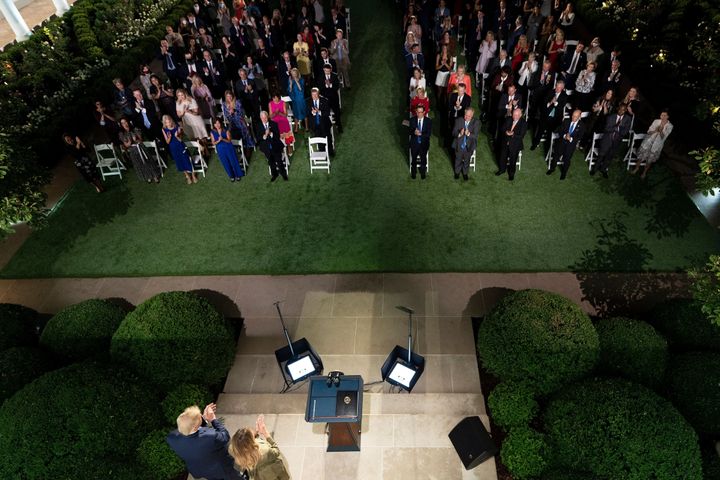 Here are four other takeaways from the second night of the 2020 Republican National Convention:

Tuesday’s convention programming included what looked like three textbook violations of the 1939 Hatch Act, which is supposed to bar political activities using government resources. First, Trump issued a pardon while at the White House during the convention. Second, the head of the Department of Homeland Security performed a naturalization ceremony, airing a video of it during the convention. Third, Secretary of State Mike Pompeo delivered a partisan speech for the convention while in Israel on the taxpayers’ dime.

Trump clearly expects little to zero actual political blowback from these actions. And why would he? Congressional Republicans have shown no interest in investigating his actions, and congressional Democrats often seem reluctant to go full steam ahead on oversight questions that deal more with political norms than with people’s lives. And the streams of media coverage outlining Trump’s corruption ― how he’s using the federal government to line his pockets, how he pressured Ukraine to investigate Biden and his son ― has had little effect on his political standing.

In fact, Trump even had former Florida Attorney General Pam Bondi deliver a speech accusing Biden of corruption. Why is that remarkable? Because part of what got Trump’s personal foundation in trouble ― he was forced to dissolve the Donald J. Trump Foundation by the New York attorney general in 2019 ― was a $25,000 donation to Bondi’s campaign shortly before she decided not to pursue fraud charges against Trump University. Oh, and Bondi is now a registered foreign agent for the Qatari government.

Considering Trump’s brazen acts, Democrats may regret largely ignoring the corruption case against Trump during their own convention last week.

The Use Of The Marginalized For Stunts

If the Democratic National Convention last week had a goal, it was to provide voters with positive information about Biden. If this week’s GOP convention has a goal, it’s to convince voters that Trump does not have the white nationalist vision of American so frequently expressed by his policies.

Part of this has come from simply highlighting speakers, including Kentucky Attorney General Daniel Cameron and Miami businessman Maximo Alvarez, who are outside of the party’s standard coalition of older white voters. But much of it has come from exploiting the same vulnerable people the Trump administration has repeatedly victimized.

But there were other examples: The speech from Navajo Nation Vice President Myron Lizer was full of praise for Trump’s assistance for Native Americans. But most Native American activists consider Trump one of their greatest political enemies and view him as actively hostile to their interests. While Lizer thanked Trump for his support during the coronavirus crisis, aid to Native Americans was actually held up for months as the coronavirus ravaged the Navajo Nation, killing nearly 500 members so far.

Lizer’s speech reflected another goal of Tuesday night’s programming: Delivering niche messages to potentially critical constituencies in swing states. Native votes could prove crucial in Arizona; so could the votes of lobster trappers in Maine and dairy farmers in Wisconsin. Trump had members of all three groups speak.

All three pitches were overstated in terms of policy: Trump’s help for the lobster industry came only after his trade war with China resulted in high tariffs on American lobsters there, and consolidation in the dairy industry has devastated family farms.

Republicans were on defense about Tuesday night’s displays before they even began. Two scheduled speakers had made highly offensive remarks recently. Republicans pulled one of them while allowing the other’s speech to go forward.

The scratched speaker, Mary Ann Mendoza, had shared a Twitter thread containing numerous anti-Semitic smears and conspiracies earlier Tuesday. The thread was written by a believer in the nonsensical QAnon conspiracy theory. Mendoza, whose son was killed by an undocumented immigrant who was driving drunk, was set to deliver a speech praising Trump. Republicans canceled the speech not long after her embrace of the theory came to light.

The second speaker, Abby Johnson, is a former Planned Parenthood organizer who has become a star among anti-abortion rights activists. But she also said police would be justified in profiling her adopted “brown” son, who is “statistically more likely to commit a violent offense,” than her white sons. She also recently suggested only the heads of households ― i.e., men in most cases ― should be allowed to vote and defended that position on Twitter in the moments leading up to her speech.

The Republican National Convention has done a good job of keeping the most fringe elements of the GOP and the conservative movement off of television screens in the first two days of the convention. But Mendoza’s removal and Johnson’s speech will hand plenty of fodder to Democrats who will argue their positions and attitudes are representative of the Trump administration.