The peculiar placement of an unexploded mine suggests that the aim of Thursday’s tanker attacks, like the attacks last month, was to threaten shipping without igniting a conflict.

The USS Bainbridge, a US Navy destroyer sent in to assist in the aftermath of the attacks, spotted a suspected limpet mine attached to the hull of the Kokuka Courageous, one of the two targeted tankers. US Central Command released photos of the mine, as well as a video of an Iranian patrol boat crew sailing out and taking it off the ship’s hull under cover of darkness.

The US has blamed Iran for the attacks. 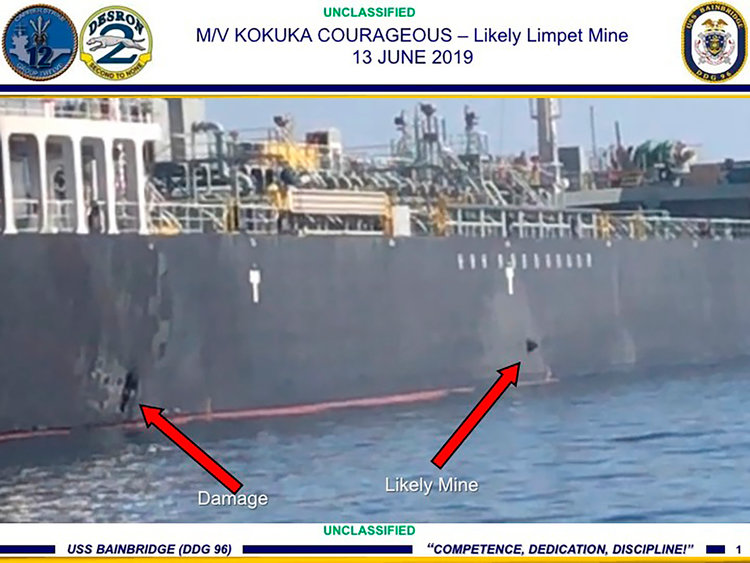 Photo of the Kokuka Courageous taken by the USS Bainbridge showing a suspected limpet mine on the hull of the tanker.US Central Command/AP

A limpet mine, a weapon named after a small sea creature that clings to hard surfaces, is a remotely-detonated explosive that can be attached to a ship using magnets.

The one in the picture provided by CENTCOM was noticeably placed high above the vessel’s waterline. Given the placement of the explosive, “the intent was likely to send a message and harass rather than cause significant damage,” Bryan Clark, a defense expert, explained to Business Insider.

A hard hit below the waterline, depending on the placement, could be much more serious.

There is a greater potential for the tanker to sink, crew members to be killed, or an environmental disaster like an oil spill — all impacts more likely to trigger an aggressive response.

Limpet mines are suspected to have been the weapon of choice in an attack on four tankers in May, an attack which the US also blamed on Iran. An investigation into the attacksconcluded that the explosives, while they were attached below the waterline, were purposefully and precisely placed to incapacitate but not sink the large vessels.

These attacks look like calculated moves to terrify ship crews and shock the oil market without risking a full-scale military response by the US.

As for how the mines might have been placed, observers can only speculate.

“The earlier ones were probably delivered by boats that came up alongside the ship at some point during transit. But, these might have been placed while the ship was at the pier,” Clark said.

The latter would be particularly troubling as it could render options like military escorts for commercial vessels useless.

He suggested that Iran, which is believed to be behind the carefully orchestrated attacks, may be lashing out in response to US pressure on the regime.

It has yet to be determined that the affected vessels were hit by a mine, despite the US military’s findings.

Yutaka Katada, the CEO of the Japanese shipping company Kokuka Sangyo,said sailors aboard the Kokuka Courageous saw “flying objects” before the explosion. He rejected reports of a mine attack as “false.”

The preliminary theory for the attack on the other tanker, the Front Altair, was that it washit by a torpedo. The insurer for this shipsuggested that the vessel might have been hit by an anti-ship missile.

There is still a lot of uncertainty surrounding the attacks even though the US has fingered Iran as the culprit. Even Iran’s involvement remains the subject of debate.

The US believes that Iran, which has a history of mining the Persian Gulf, is following through on a threat from April to seal off the Strait of Hormuz. President Trump warned Friday morning that if Iran attempts to close the strait, it will not be closed for long.

US military assets have been pouring into the CENTCOM area of responsibility over the last month in response to unspecified threats from Iran. The combatant command said in a statement Thursday that it remains ready to defend US interests in the region.