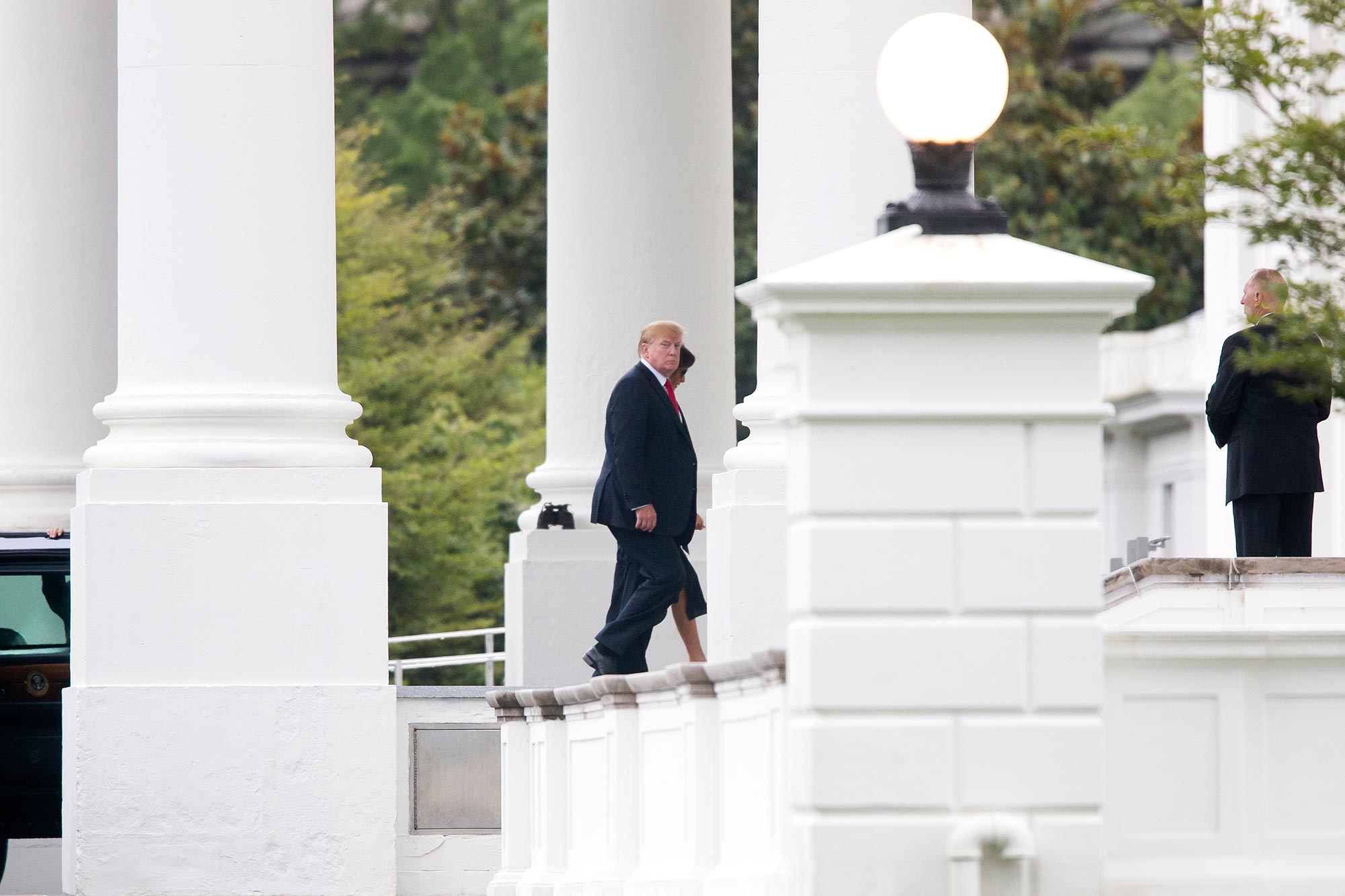 It’s been more than a week since President Donald Trump returned to the White House from his controversial trip to Helsinki, only to be met by hundreds of angry protestors wielding pots, pans and bullhorns. On Monday, as the protest entered its eighth consecutive day, a boisterous crowd was still assembled in front of the White House — with no plans to leave anytime soon.

After a week of nightly protests featuring opera singers, an 18-person Mariachi band and local bands playing through the rain, protestors on Sunday greeted the president and First Lady Melania Trump with chants of “LOCK HIM UP!” as the first couple returned from Joint Base Andrew.

Plans for Monday night’s protest include drummers at White House exits for “the walk of complicity,” singers performing the national anthem “to celebrate the commencement of Paul Manafort’s trial,” and a new and “very loud” sound system, according to tweets by top Clinton aide and protest organizer Adam Parkhomenko.

Tuesday night protests are set to feature a Russian translator so “Trump and the White House understands what protestors are saying,” Parkhomenko tweeted.

The musically-decorated activism began with a single tweet from a former Clinton aide last Monday afternoon as Trump was flying back to Washington, D.C., from Helsinki — a trip that had even normally pro-Trump allies crying foul.

The former aide to Hillary Clinton, Philippe Reines, sensed a political moment and tweeted: “If someone flew home from Helsinki they’d get back to DC around 9pm. You know what I’d hate if I just got back & needed sleep? A bunch of people outside my home with bullhorns & air horns. I’ve never started a protest. How does one do that @MoveOn?”

“I think you just did, homie!” one user responded.

By that evening, more than six-hundred protestors had gathered to “welcome” Trump home from his talks with Russian President Vladimir Putin — denounced by critics as appeasement. That noisy, ear-popping crowd grew the following night and Reines’ call has since sparked more than a week of creative, nightly protests in front of the White House — referred to by protestors as the “Kremlin Annex.”

Parkhomenko has channeled the post-Helsinki outrage that Reines harnessed, and used his 206,000 Twitter followers to crowdsource ideas and funds for the continuous protest, dubbed #OccupyLafayettePark. An Action Blue donation page tweeted out by Parkhomenko raised more than $50,000 in less than 24 hours.

You can keep track of the events on Pennsylvania Avenue below:

The first night of the protest featured President of the Center of American Progress Neera Tanden and Congressman Joaquin Castro (D-Texas) speaking to a crowd of fired-up protestors.

“I hope it brings renewed focus and significant attention on the need for the American people to know why President Trump is abandoning this nation in favor of Vladimir Putin,” Avenatti told PEOPLE on Tuesday.

Actress and activist Alyssa Milano also shared her political fears with the group.

“Everything we know, that we have fought for in the past, is up-for-grabs with this nominee,” Milano said, referring to Trump’s Supreme Court nominee Brett Kavanaugh. The crowd cheered her on, holding signs that read “IMPEACH.”

An 18-member mariachi band played in front of the White House starting around 9:30 p.m. on Wednesday.

Opera singers belted out “America the Beautiful” to try to keep Trump awake on the fourth day of protests.

“Nothing like Opera singers at the White House when Trump is trying to go to bed singing a song he doesn’t know the lyrics to,” Parkhomenko tweeted.

A hip-hop and brass band joined two dancers at the White House Friday, motivating anti-Trump protestors as the weekend neared.

Rain poured over the nation’s capital on Saturday, but protestors showed up — armed with umbrellas and motivated by a performance by local band The Collective.

With clear skies, protestors turned the chant Trump has often led to mock 2016 rival Hillary Clinton against him and his wife as they arrived home to the White House.

DAY EIGHT: A New Sound System Is Set Up to Amplify Drummers and Singers Performing the National Anthem

“In addition to drummers, the Monday protest at the Kremlin Annex will feature a singer performing the national anthem to celebrate the commencement of Paul Manafort’s trial,” Parkhomenko tweeted on Sunday. “Bring lots of American flags.”

The White House has been scrambling to handle the political fallout following Trump’s disastrous summit with Putin in Helsinki.

In a press conference there last Monday, Trump said he took Putin‘s word over findings by U.S. intelligence agencies that Russia had interfered with the 2016 American presidential election.

Trump has since backtracked on the widely derided comments. During a meeting Tuesday with members of Congress, Trump said he supported U.S. intelligence agencies, and claimed he had misspoken when he said he didn’t see any reason why Russia would have meddled the U.S. election. He has nevertheless continued to defend his performance at the summit. And last week, White House Press Secretary Sarah Sanders announced Trump’s plans to invite Putin to Washington in the fall.