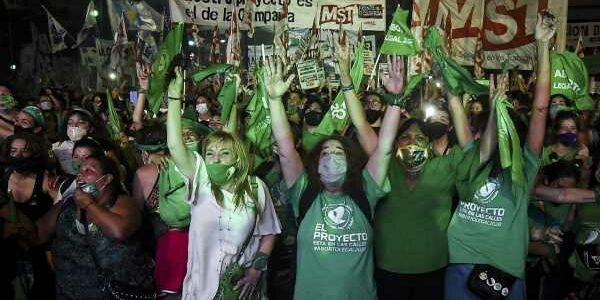 The bill, approved by the senate in a 38-29 vote after a debate that stretched into the early hours of Wednesday, gives women the right to voluntarily terminate a pregnancy until the 14th week. It is a victory for President Alberto Fernandez, who had made its approval a key campaign pledge, and puts Argentina among the few countries in the region to allow the procedure.

The proposal, which had already passed in the lower house by a wide margin onDec. 11, now heads to Fernandez who’s expected to sign it into law. It is the latest sign of a sea change in the home country of Pope Francis: Despite the opposition of the Catholic church and evangelical groups, the pro-abortion campaign received a groundswell of support from young Argentine women, who say lack of access to the medical procedure leads thousands to seek clandestine operations in unsanitary and dangerous conditions.

Activists clad in green bandannas, which have become a symbol for the abortion rights movement in Argentina, celebrated in front of Congress in downtown Buenos Aires as the final results of the vote came in at 4am.

Fernandez said last month that some38,000 women are hospitalized every year due to medical malpractice in illegal abortions across the country. Previously, abortion was only legal in Argentina in cases of rape or if the mother’s health was at risk.

It’s the second time in as many years that the abortion issue has come to a vote in Argentina. A similar bill in 2018 passed through the lower house butnarrowly failed in the senate. Argentina joins Uruguay, Cuba and Guyana as the only countries in Latin America where elective abortions are legal. It’s also allowed in some parts of Mexico.