WASHINGTON — President-elect Joseph R. Biden Jr. on Tuesday criticized the speed of vaccine distribution under the Trump administration and promised to step up the pace when he takes office, while delivering a sober warning about the toll of the coronavirus pandemic.

Mr. Biden offered a bleak assessment of the months ahead, saying they would be “a very tough period for our nation,” and he exhorted Americans to make the sacrifices necessary to overcome the devastation of the virus.

“It’s going to take all the grit and determination we have as Americans to get it done,” he said.

He warned that if the current pace of administering vaccines under President Trump continued, “it’s going to take years, not months,” to vaccinate the nation. And he said he had directed his team to prepare a more aggressive effort once he takes office in three weeks, pledging “to move heaven and earth to get us going in the right direction.”

“This is going to be the greatest operational challenge we’ve ever faced as a nation,” Mr. Biden said during an address in Wilmington, Del., “but we’re going to get it done.”

Mr. Biden will assume the presidency amid a health crisis that has already killed more than 336,000 people in the United States and inflicted widespread economic disruption. Distributing vaccines to the American people will pose an early test for him.

Earlier this month, federal officials had said their goal was for 20 million people to get their first shots of a vaccine by the end of the year. As of Monday morning, 11.4 million doses of the Pfizer and Moderna vaccines had been sent out across the country, but just 2.1 million people in the United States had received their first dose, according to a dashboard maintained by the Centers for Disease Control and Prevention, which most likely reflects a reporting lag of several days.

Mr. Biden has vowed to get 100 million vaccine shots into the arms of Americans in his first 100 days in office; vaccination currently requires two shots, which would suggest that about 50 million people would be vaccinated in that time.

Operation Warp Speed, the Trump administration’s effort to fast-track the development and rollout of vaccines, spent billions of dollars to help drug companies test and manufacture their vaccines and ensure that they would have a buyer. Those investments helped vaccines become available much faster than many experts had predicted.

Still, getting those vaccines into arms has gotten off to a slower start than federal officials had hoped.

“We certainly are not at the numbers that we wanted to be at the end of December,” Dr. Anthony S. Fauci, the government’s top infectious disease expert, said on CNN on Tuesday. But he added, “I believe that as we get into January, we are going to see an increase in the momentum.”

Moncef Slaoui, the scientific adviser to Operation Warp Speed, said as recently as last week that the odds were high that the first 100 million people in the United States would be immunized by the end of March.

Michael Pratt, a spokesman for the Department of Health and Human Services, defended the pace of the vaccine rollout. He said in a statement that it was “a testament to the success of Operation Warp Speed” that 20 million doses had already been made available to states and other jurisdictions. (Not all of the doses have been shipped.) And Mr. Trump said in a tweet that it was “up to the States to distribute the vaccines once brought to the designated areas by the Federal Government.”

The pace of inoculation in the United States is expected to pick up in the first months of next year as more vaccine supply becomes available and more facilities begin giving it out to a wider selection of Americans. So far, vaccines have been given primarily to health care workers at hospitals and to residents of nursing homes and other long-term care facilities.

In his remarks on Tuesday, Mr. Biden said he could “see a return to normalcy in the next year,” but he also offered an ominous forecast for the near future. “We need to steel our spines for what’s ahead,” he said, adding that the next few months could be “the toughest during this entire pandemic.”

He expressed hope that Mr. Trump, who has resisted wearing a mask and mocked Mr. Biden during the campaign for wearing one, could still influence the public in a positive way.

“It would make a huge difference for President Trump to say, ‘Wear masks,’” Mr. Biden said. “I hope the president will clearly and unambiguously urge all Americans to take the vaccine once it’s available.”

Hours before Mr. Biden spoke, Vice President-elect Kamala Harris received her first dose of a Covid-19 vaccine. The shot was administered on live television, just as Mr. Biden’s was last week when he received the Pfizer vaccine at a hospital in Delaware.

Ms. Harris received the Moderna vaccine at United Medical Center, a public hospital in Southeast Washington. She encouraged Americans to get vaccinated as well, saying: “It is relatively painless. It happens really quickly. It is safe.” Her husband, Doug Emhoff, also received the vaccine on Tuesday.

Vice President-elect Kamala Harris received the Moderna Covid-19 vaccination on Tuesday at United Medical Center in southeast Washington, and urged the public to get vaccinated as well.

“Let’s do it.” “All righty. Ready?” “Yeah, I’m ready. That was easy. [laughing] Thank you. I have now been vaccinated — as Joe likes to say, there’s a big difference between the vaccine and vaccinations. I want to encourage everyone to get the vaccine. It is relatively painless. It happens really quickly. It is safe. Literally, this is about saving lives. It’s literally about saving lives. I trust the scientists, and it is the scientists who created and approved this vaccine. So I urge everyone, when it is your turn, get vaccinated. It’s about saving your life, the life of your family members and the life of your community.” 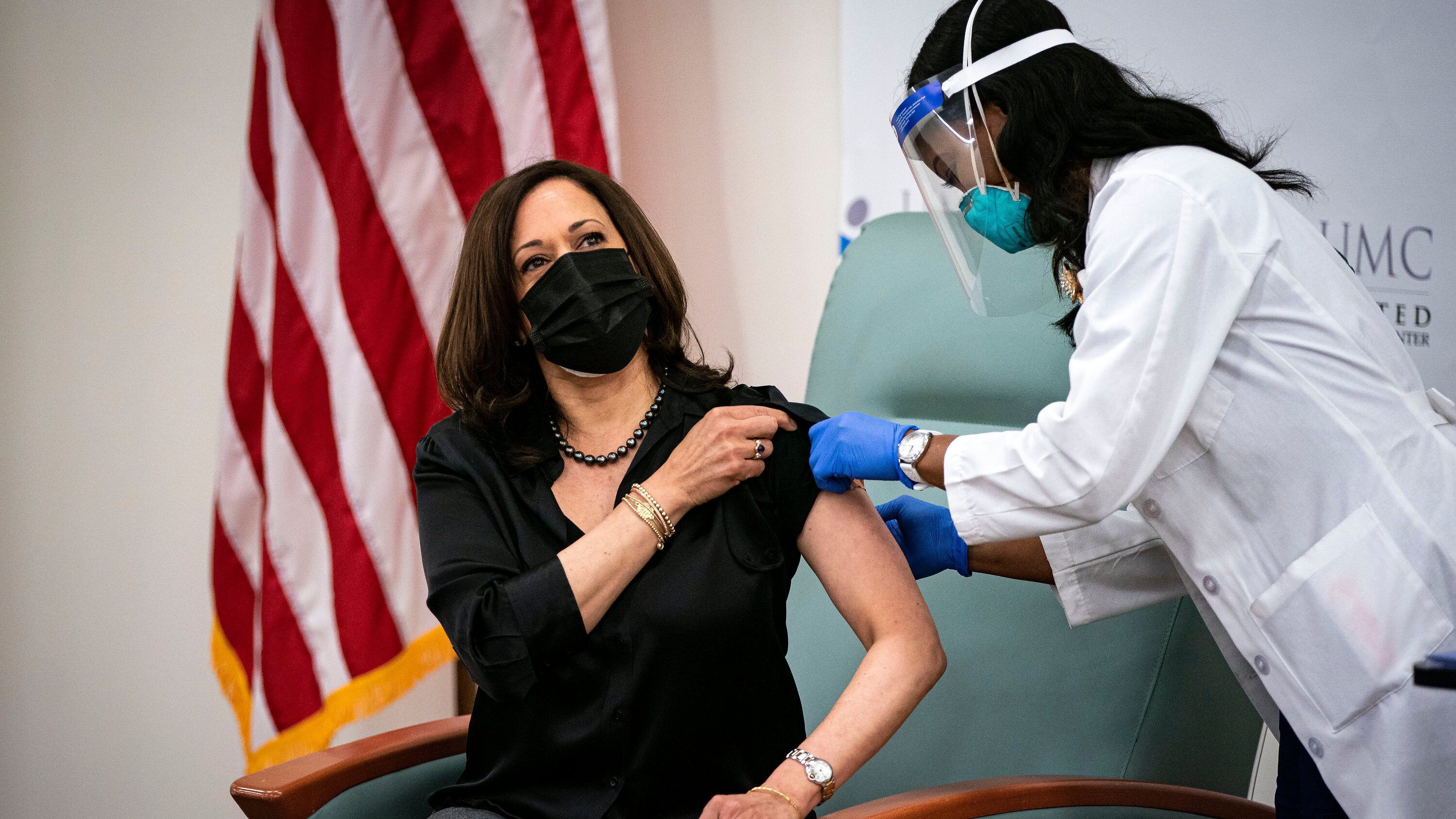 State and local officials have long said they need more money to distribute and administer vaccines. The $900 billion relief package that Mr. Trump signed into law on Sunday sets aside more than $8 billion for vaccine distribution, roughly in line with the $8.4 billion that health departments requested from Congress. The C.D.C. in September had sent $200 million to the states for the effort, followed by another $140 million this month.

The government has said the goal is to allow anyone who wants a vaccine to get one by June, but it has not yet secured enough supply of vaccines that have been authorized for use. The United States has secured commitments for enough vaccine to vaccinate 200 million of the roughly 260 million adult Americans who are eligible to be inoculated.

Over the summer, before its vaccine had been shown to be effective, Pfizer agreed to provide an initial 100 million doses to the United States. At the time, the government passed on an offer from Pfizer to lock in additional supplies.

But as it became clear that more doses were needed, the government resumed talks with Pfizer. In a deal announced last week, Pfizer agreed to provide an additional 70 million doses by the end of June and another 30 million by the end of July.

As part of the deal, the government agreed to invoke the Defense Production Act, a Korean War-era law that allows the government to more quickly secure key supplies by forcing suppliers to prioritize orders from a specific contractor. Operation Warp Speed has so far used the Defense Production Act 18 times, including to help produce glass vials and syringes, according to the Department of Health and Human Services.

Mr. Biden said on Tuesday that he would also make use of the Defense Production Act upon taking office, saying he would “order private industry to accelerate the making of the materials needed for the vaccines as well as protective gear.”

The government has a few avenues for providing vaccines to the 60 million American adults not covered by the existing deals with Pfizer and Moderna.

It may be able to exercise options to buy more doses from Pfizer or Moderna. The government could also turn to vaccines from other manufacturers expected to report late-stage results in the coming weeks. Johnson & Johnson is expecting results late next month from a trial of its single-shot vaccine, a format that would make it easier to deliver than the vaccines from Pfizer and Moderna. And a U.S. trial evaluating a two-shot vaccine developed by AstraZeneca and the University of Oxford could have results in February.

On Tuesday, Mr. Biden acknowledged he was not yet in control of the government’s virus response, saying, “My ability to change the direction of this pandemic starts in three weeks.” And he made clear that he would need help from Congress next year to provide additional funding to carry out his plans.

But even as he warned about the difficult weeks and months ahead, he struck an optimistic note about the longer term.

“We’re going to get through this,” he said. “Brighter days are coming.”