The man tapped to become President-elect Joe Biden’s national security adviser knocked aspects of President Trump’s foreign policy in 2017 when he was interviewed by a state-run media outlet in China.

Jake Sullivan, who served as Biden’s national security adviser during his time as vice president, worked in the State Department and as a senior policy adviser to Hillary Clinton’s 2016 campaign. He criticized Trump’s opposition to the Iran nuclear deal, warned that the administration might exercise military force against North Korea and weighed in on U.S.-China trade relations.

“I think that China and the rest of the region should be prepared for the possibility, not the certainty and maybe not even the likelihood, but the distinct possibility that the United States would use military action on North Korea,” he said at one point. 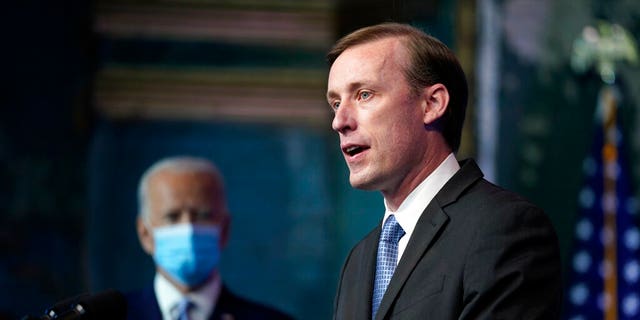 Another major topic was President Trump’s decision to recognize Jerusalem as the capital of Israel, which the host described as “a very important move to please those Christian fundamentalists who would be an important part of his power base.”

“I think this was a political decision, not a foreign policy decision,” Sullivan said. “This was about Trump and his supporters — it was not about moving the peace process forward. It’s hard to find a good argument for this decision, with respect to advancing the cause of peace in the Middle East.”

Regardless, he added, a peace agreement between the Israelis and Palestinians did not appear to be a near-term possibility anyway.

During the interview, which was conducted before the president’s decision to pull out of the Iran deal, Sullivan said he would urge Trump to remain in it.

“I think Donald Trump has been playing games with the Iran nuclear deal,” Sullivan said. “He’s been raising questions about whether it’s gonna stay in or leave. And in doing that, he has created a situation in which the rest of the world is more worried about the risk Washington poses than they are about the risk Tehran poses. And that is not in America’s strategic interest.”

Sullivan did push back when Yang suggested that the Trump administration was taking sides in “sectarian violence” in the Middle East.

“I think that that question, the way that you framed the question, doesn’t take into account fully the unique threat and the unique destabilizing role that Iran is posing right now,” he said. “It’s Iran’s backing, along with Russia and Bashar Assad, that has led to the death of 700,000 Syrians and to a refugee flow of millions. It’s Iran that has been involved in undermining governments in Yemen, in Lebanon, in Iraq, and has been involved in massive human suffering in Syria.”