A Black Lives Matter protester marching with a group of fellow activists through rural Pennsylvania was allegedly shot by a white man on Monday night, according to witnesses and a live-streamed video of the incident.

The 27-minute video, posted to Facebook by activist Frank Nitty, shows the Wisconsin-based protesters — who are in the middle of a 750-mile march from Milwaukee to Washington, D.C. — standing on a road in Schellsburg, Pennsylvania, a little before midnight.

Near the end of the video, two white men can be seen standing in front of a nearby house. One of them appears to be holding a gun. Multiple gunshots can then be heard in the video, as Nitty and other activists scramble and duck into the nearby cars that were accompanying them on their march.

“We’re leaving! You don’t have to get violent!” one protester can be heard screaming.

The video then shows one of the protesters, who says he’s been shot, bleeding from the face as he climbs into a car.

“Early information indicates there was an incident between a group of activists traveling from Milwaukee to Washington, D.C. and two area residents,” the Pennsylvania State Police said in a statement Tuesday. “Gunfire was exchanged, and one activist was struck. The injured individual is being treated at Conemaugh Hospital for non-life-threatening injuries.”

It’s not clear from the statement if any of the activists returned fire during the incident. A police spokesman didn’t immediately respond to HuffPost’s request for clarification.

“The residents involved are being questioned by state police,” the statement continued. “Investigators believe there is no ongoing threat.”

Police are expected to provide further details on Tuesday afternoon. 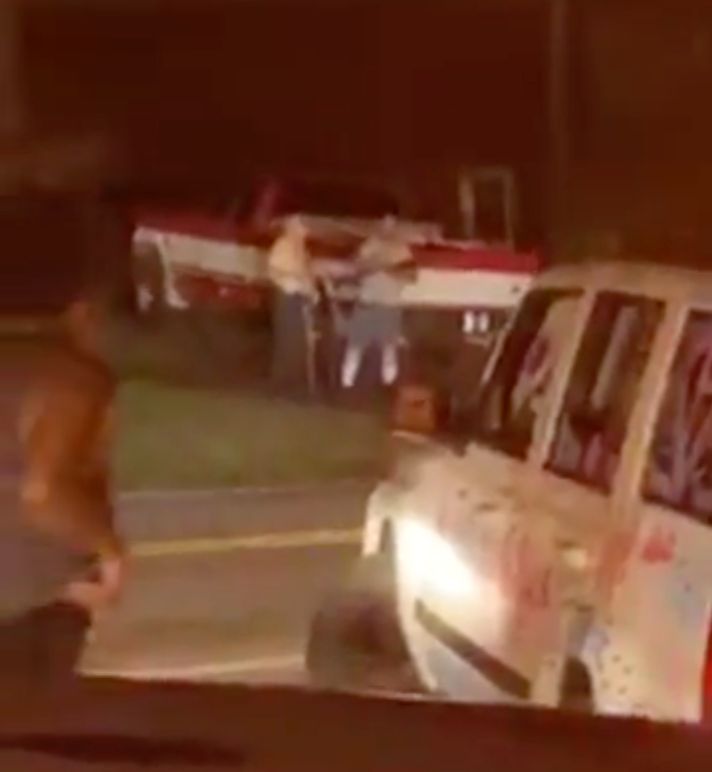 In another live-streamed video posted to Facebook after the shooting, protester Tory Lowe explained that the group had stopped briefly Monday night before heading up an incline when the armed man and another man appeared outside the house in Schellsburg, about a two-hour drive east of Pittsburgh.

“He just came down the street shooting with a rifle,” Lowe recounted, describing the shooter as a “white male.”

“I’m hoping these troopers go over there and he get arrested,” Lowe said.

The protesters started their long march earlier this month with the goal of reaching Washington by this Friday to commemorate the 57th anniversary of Martin Luther King Jr.’s “I Have a Dream” speech.

The journey has been tumultuous at times. Both Lowe and Nitty were arrested as they marched through Indiana two weeks ago. Police there claimed they had blocked traffic.

“The things we have been through just walking the route to Washington, D.C., it’s crazy,” Lowe said.

Their march is part of a summer-long national uprising against police brutality, which has seen massive demonstrations in hundreds of American cities.

Most recently, residents of Kenosha, Wisconsin — a city near Milwaukee — rose up against local police after a video emerged of cops repeatedly shooting an unarmed Black man named Jacob Blake.

Both police and right-wing activists have engaged in violence against Black Lives Matter protesters during the demonstrations this summer. Just this past weekend, a far-right demonstrator allegedly opened fire on protesters in Portland, Oregon.

Shortly before the shooting in Pennsylvania on Monday night, Mark and Patricia McCloskey — the Trump-supporting white couple facing felony charges for waving guns at Black Lives Matter protesters in St. Louis earlier this summer — appeared as featured speakers at the Republican National Convention.