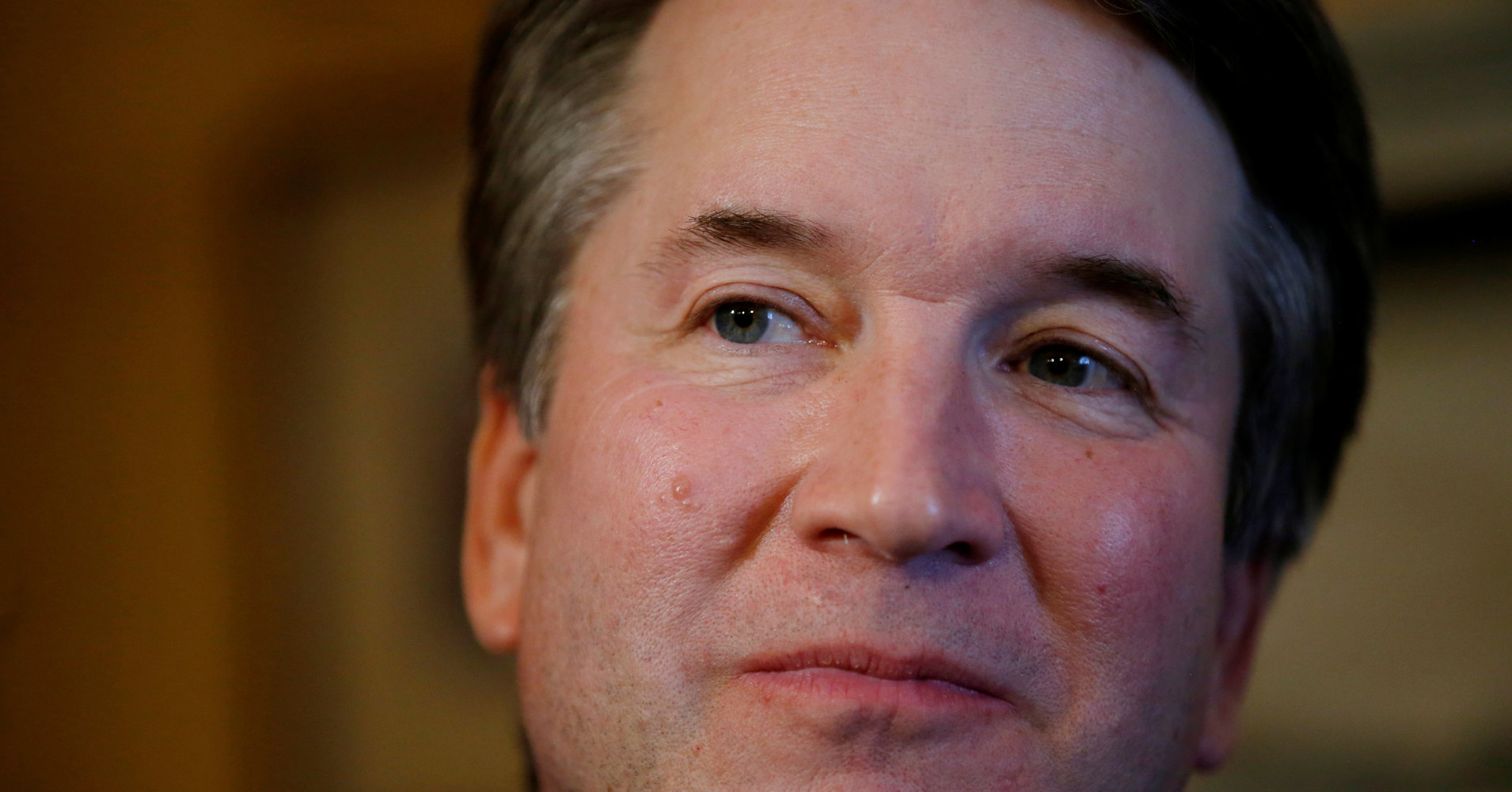 After President Donald Trump nominated Brett Kavanaugh for the Supreme Court earlier this month, Rabbi Shmuly Yanklowitz was disturbed to read about one of the judge’s more controversial rulings. The case involved a defunct kosher meatpacking company Yanklowitz knew well, the New York-based Agriprocessors. The company’s treatment of undocumented workers created a scandal within the Orthodox Jewish community a decade ago, when Yanklowitz was a rabbinical student concerned with social justice.

During a 2008 labor dispute, a federal appeals court ruled that Agriprocessors had to bargain with a group of workers at a Brooklyn distribution facility who had voted to unionize. But Kavanaugh penned a dissent siding with Agriprocessors, arguing that most of the employees in the election were ineligible to unionize because they were undocumented.

The ruling bothers labor law experts for the way it bucks long-standing federal policy. It bothers Yanklowitz because he had met face to face with Agriprocessors employees and understood their plight.

“I was quite distressed to see a Supreme Court nominee with this opinion,” Yanklowitz said. “The notion that a fundamental right would be stripped away from undocumented workers feels to me like a cruel and unjust measure.”

“I think it’s a scary time in America,” he added.

With the Senate taking up his nomination, Kavanaugh has drawn scrutiny for his view of presidential power, his track record of business-friendly rulings, and the possibility he would be the fifth vote needed to overturn Roe v. Wade. But the Agriprocessors case ― in which Kavanaugh staked out a lonely, hard-line position even relative to other Republicans ― offers a unique window into the judge’s thinking on immigration, workplace rights and even Supreme Court precedent.

The workers at Agriprocessors had voted to join the United Food and Commercial Workers union in 2005. They apparently had good reason to do so. “We were treated like garbage,” one former truck driver at the facility told the Forward in 2008. “We were doing a lot of work for not a lot of money. And if we said anything, we got fired immediately.”

The company tried to block that union effort, taking the case to the National Labor Relations Board, the federal agency that referees labor disputes. Agriprocessors argued that the undocumented status of most of the workers negated the election results. The company pointed to the Immigration Reform and Control Act of 1986, which made it illegal to knowingly hire workers who are in the U.S. illegally.

It’s long been policy in the U.S. to extend basic protections to workers regardless of their immigration status. The idea isn’t to reward those who came here illegally; it’s to protect the working standards of everyone. If undocumented workers can’t unionize, then scummy employers have an added incentive to hire and exploit them. That would not only make it harder for native-born workers to land jobs, it would drive down pay and working conditions across entire industries.

The Supreme Court understood those implications when it ruled in the 1984 case Sure-Tan Inc v. NLRB that the National Labor Relations Act applies equally to undocumented workers. “If an employer realizes that there will be no advantage under the NLRA in preferring illegal aliens to legal resident workers, any incentive to hire such illegal aliens is correspondingly lessened,” the court wrote in its decision.

Given that ruling and the long history of granting undocumented workers fundamental protections, an administrative law judge determined that the Agriprocessors workers were employees and had a legal right to unionize. When Agriprocessors refused to acknowledge the union, the three-member labor board reached a unanimous decision ordering the company to sit down and start bargaining. Two of those board members were Republicans.

Agriprocessors appealed the board’s decision to the U.S. Court of Appeals for the D.C. Circuit, where a three-judge panel affirmed the labor board’s decision; Kavanaugh was the dissenter.

He wrote that the Immigration Reform and Control Act trumped the Supreme Court’s earlier determination in the Sure-Tan case that undocumented workers were covered by the law. He concluded that the pro-union votes by the undocumented workers ― that is, 17 of the 21 workers who cast ballots, according to the Forward ― may have unfairly “diluted or overridden” the votes by “the legal workers.”

One of his fellow judges all but mocked the logic in Kavanaugh’s dissent, that once it became illegal to hire undocumented workers due to immigration law, the definition of “employee” under labor law changed, too. “[T]his does not logically follow,” Judge David Tatel wrote, “as an example illustrates: ‘Because it’s not cold outside, it’s not snowing. It is now cold outside, therefore it must be snowing.’”

Wilma Liebman, one of the former labor board members who ruled against Agriprocessors, said Kavanaugh’s dissent suggests he’s “very skeptical if not disdainful” of administrative determinations made by agencies like the NLRB. It also shows a willingness to take on Supreme Court precedent, she said.

“What Kavanaugh has done is really go out on a limb,” Liebman said of the dissent. “I guess the fear with this particular issue is, does he get [Justice Samuel] Alito, does he get [Justice Clarence] Thomas to go along with him and revisit what might be thought of as established precedent?”

Kavanaugh’s reading of the law comes with serious economic implications. If it prevailed, employers could hire undocumented workers knowing that if they organized and voted in favor of joining a union, the election results would be thrown out. And his logic could easily apply to other critical workplace statutes, including the minimum wage and overtime protections of the Fair Labor Standards Act. If undocumented workers were no longer “employees” under the law, employers would have much less to fear by committing wage theft and undercutting pay for everyone.

In fact, Agriprocessors was accused of doing exactly that. Just months after the appeals court’s ruling, federal immigration officials raided the company’s Iowa plant and detained nearly 400 undocumented workers. Many of them complained of brutal hours, unpaid overtime and unsafe conditions in the plant. At least 20 were underage.

“Management there found a way to further the definition of exploitation,” said Mark Lauritsen, director of the UFCW’s food processing and packing division, who was around for the battles with Agriprocessors. “They were doing things you’d think were banished from the workplace a long time ago.”

Agriprocessors was sold in 2009, the same year that Sholom Rubashkin, who ran the company’s Iowa operations, was convicted of bank fraud and money laundering. He received a 27-year prison sentence. The White House commuted Rubashkin’s sentence last year, saying it was too severe for his crimes. (As a developer, Trump himself once employed some 200 undocumented Polish immigrants who demolished the Bonwit Teller building in Manhattan in substandard working conditions.)

The scandal surrounding Agriprocessors helped spur the creation of seals of approval for ethically produced kosher food. Yanklowitz was involved in those efforts, saying Agriprocessors’ business practices were “against everything Jewish values stand for.” He said he has thought often about his experience meeting the company’s undocumented workers lately, as the Trump administration split up families at the Mexico border and nominated Kavanaugh for a Supreme Court seat.

“The part that stuck with me most was the level of fear these [workers] had,” Yanklowitz recalled. “I remember a woman, Maria, holding her little baby, just totally unsure of her situation. I feel that we need not only politicians but Supreme Court judges who understand the moral complexity of what’s happening right now.”