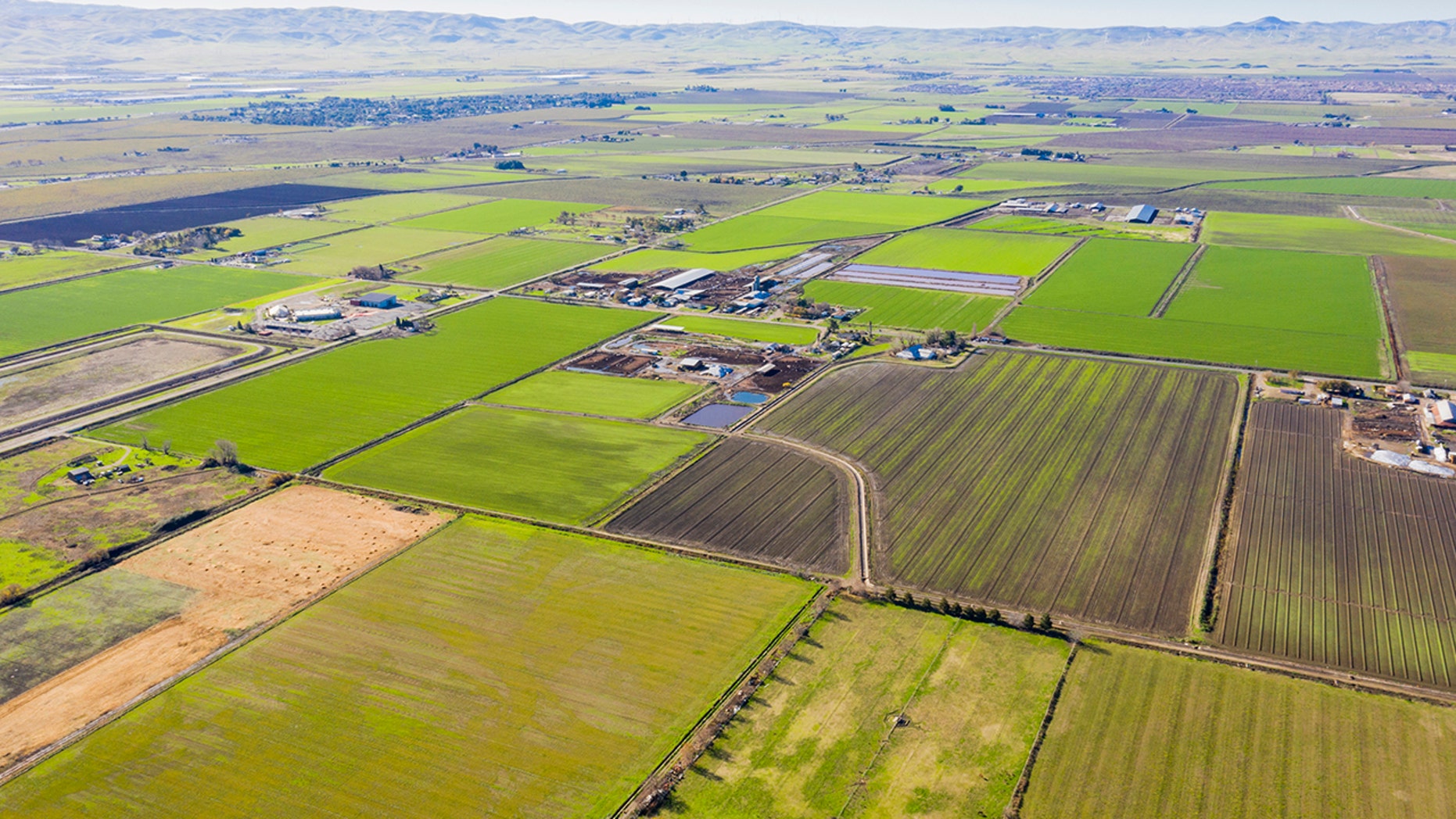 An aerial view of farmland in California’s central valley. (iStock)

Farmers up and down California’s Central Valley are up in arms over the state seizing their land to build its long-awaited high-speed railway and then failing to pay the hundreds of thousands of dollars owed them for years.

Thanks to an order of possession by the Superior Court, California can take private land through eminent domain for the troubled bullet train project. While landowners are expected to eventually be reimbursed for the property – and for expenses like lost farming production, irrigation replacement projects and road construction – many farmers in California’s agricultural heartland say state officials have offered them a myriad of excuses as to why they haven’t yet doled out the cash.

“I am out a quarter-million bucks on infrastructure, and they haven’t paid a dime for a year,” John Diepersloot, a fruit farmer who cleared a large parcel of his peach orchard to make way for the train, told The Los Angeles Times. “I don’t have that kind of money.”

What’s even more frustrating for California’s farmers are the constantly changing plans for the train, the multiple delays in construction, the seemingly skeleton-staffed California High-Speed Rail Authority and the difficulty in getting concrete answers.

CALIFORNIA'S BULLET TRAIN AND BIGGEST BOONDOGGLE IS OVER BUDGET BY BILLIONS

“The property owners are very frustrated that the high-speed rail authority don’t seem to know what they actually need,” said Mark Wasser, a Sacramento-based attorney representing more than 70 farmers and businesses affected by the project. “We have farmers who the authority has come back four times to change where they want to take.”

Rail authority officials acknowledge they have not yet paid numerous landowners, but so far have not given a reason for the delay.

“We understand the concerns of private property owners affected during the acquisition of their property by the California High-Speed Rail Authority and construction of the High-Speed Rail system,” Don Odell, the authority’s chief of real property, said in a statement to Fox News. “We strive to work closely with affected property owners to minimize the impact the project has on them and to the ensure that they receive fair market value, consistent with state law, for their land and other expenses they incur due to the construction of the high-speed rail system.”

California’s high-speed rail project has been bogged down with delays, shifting plans and questions over the cost and funding almost since its inception.

The projected $79 billion project is years behind schedule with the latest estimate for completion set for 2033. Bullet train planners have been under increasing pressure to make progress on the system that many believe had no plausible way of living up to its goal of getting riders across the state in three hours or less.

Earlier this year, California Gov. Gavin Newsom announced he is putting the plan for a rail line between Los Angeles and San Francisco on hold in favor of a much-shorter line between the cities of Bakersfield and Merced – a move that had Republican lawmakers in the Golden State calling for a referendum vote on the project.

In his State of the State address in February, Newsom argued against the frequent complaint that the Merced-Bakersfield line would be a “train to nowhere,” and said that a high-speed railway would “form the backbone of a reinvigorated Central Valley economy.”

“The people of the Central Valley endure the worst air pollution in America as well as some of the longest commutes,” Newsom said. “And they have suffered too many years of neglect from policymakers here in Sacramento. They deserve better.” He added: “We can align our economic and workforce development strategies, anchored by high-speed rail, and pair them with tools like opportunity zones, to form the backbone of a reinvigorated Central Valley economy.”

President Trump was quick to label the entire high-speed rail project a “disaster” and call for Sacramento to return the funds given to the state by the federal government.

“California has been forced to cancel the massive bullet train project after having spent and wasted many billions of dollars,” Trump tweeted in February. “They owe the Federal Government three and a half billion dollars. We want that money back now. Whole project is a ‘green’ disaster!”

In March, the head of the state’s rail authority fired back at Trump’s effort to block more federal dollars from going to the California project.

At that point, the Federal Railroad Administration had given California $2.5 billion to construct a Los Angeles-to-San Francisco link, with another $929 million pledged. But federal authorities – and the president – claimed the terms of the federal grant had not been met and threatened to withhold any future payments while demanding repayment for the funds already doled out to California.