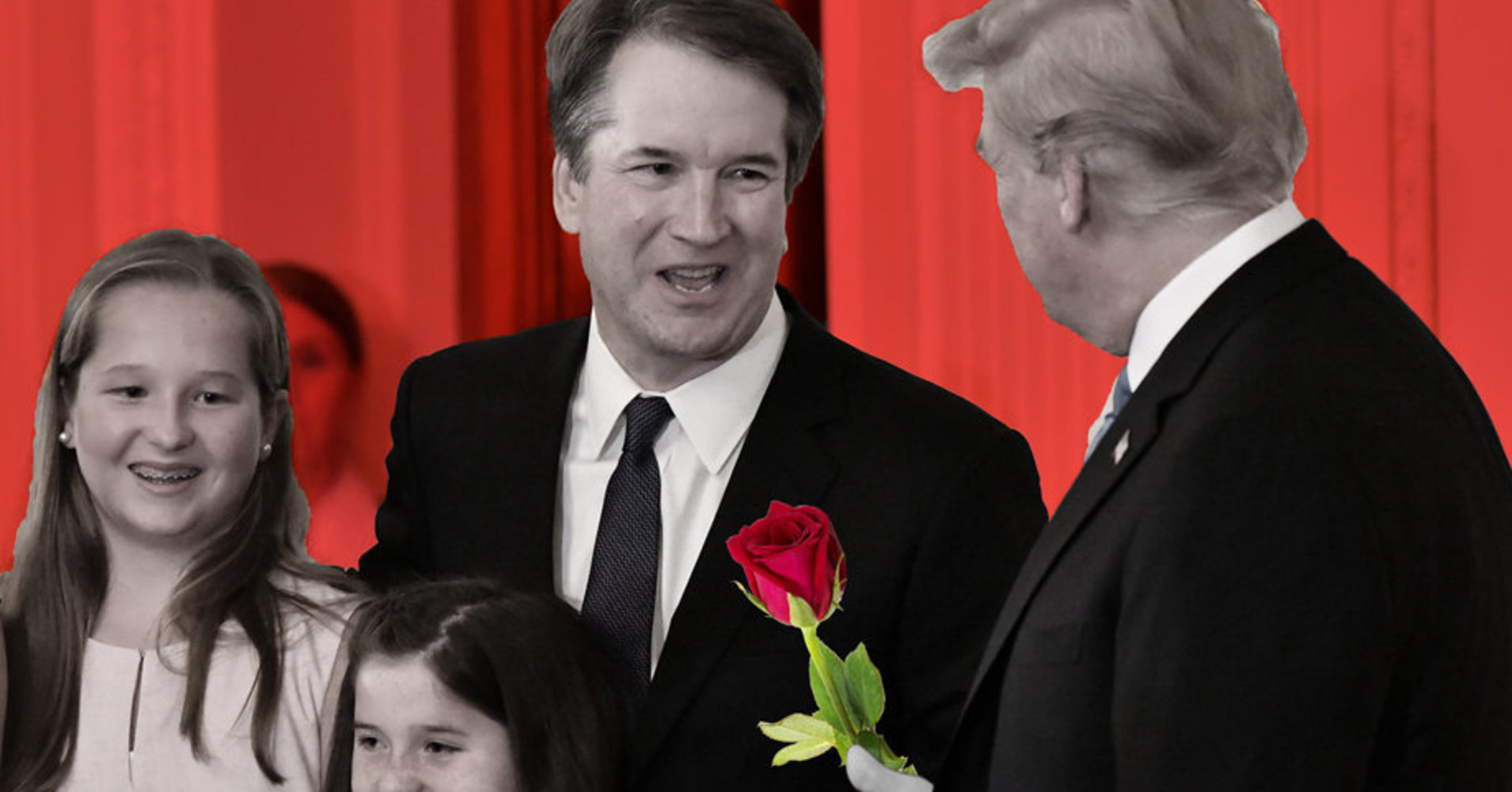 Save for the wardrobe switch ― from bikinis to boxy suits and back again ― the spectacles were almost indistinguishable: a reality TV star choosing the right man or woman from a motley group of 25 candidates.

Monday night on ABC, we were served a nauseating turducken of reality pageantry: President Donald Trump’s ostentatious announcement of Brett Kavanaugh as his latest Supreme Court nominee, bookended by an episode of Becca Kufrin’s season on “The Bachelorette,” and then followed by an episode of “The Proposal.”

Three hours and 20 minutes of slippery salesmanship in the name of love and justice ― it was enough to make anyone’s brain drip out of her ears.

“Reality” is subordinate to suspense in the narrative-making mill of primetime TV. For example, it’s a little-acknowledged bit of common sense that most “Bachelor” stars see potential in only a handful of contestants at the beginning of the season. But to provide grist for the show, they must feign interest in the others, sending the cast-offs home one or two at a time.

He began with a list of 25 judges recommended by the Federalist Society. (Unlike the casting company hired by “The Bachelorette,” the society’s Supreme Court pickers seem to view past evidence of retrogressive social views as a feature, not a bug.) By June 29, just a couple of days after Justice Anthony Kennedy said he was retiring, Trump told the press that he’d narrowed his shortlist to a final five and scheduled the ultimate announcement for Monday, July 9.

The day before the announcement, a source told NPR that the president was still undecided, describing the scene as “insane.”

One envisions the Bachelor, verklempt, standing on a sunny balcony overlooking the Mediterranean while informing us in voiceover that he still can’t decide whom he’ll propose to in an hour and a half. “I don’t want to say goodbye to either of them,” he sniffles. “They’re both absolutely amazing women.” (Oh God, which one will he pick? Only three more commercial breaks before the agony ends!)

Trump’s public displays of indecision may have been more bogus than a Bachelor’s. On Tuesday, NBC’s Leigh Ann Caldwell reported that Trump’s administration had been in talks with Kennedy for months about his replacement ― and that Kavanaugh was added to the Federalist Society’s public list because the retiring justice recommended his former clerk. Picking a winner haphazardly from a shortlist is one thing, but scheming to get your final choice cast before the season even begins? That would be diabolical production. 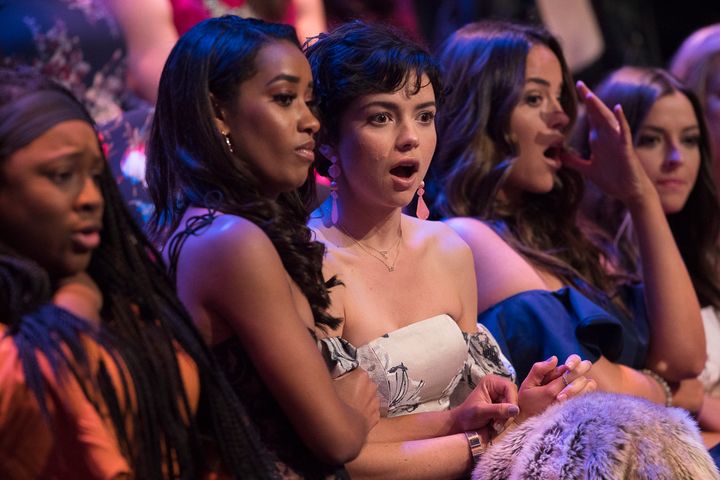 In the most sober of presidencies, a Supreme Court nomination bears certain hallmarks of reality television. There’s a special televised announcement following weeks of suspense and secrecy surrounding the potential nominees, and we all tune in to watch the president wax orotund about the sanctity of his duty and the merits of his choice. It’s already a spectacle, a selling of the nominee to the American people and, more importantly, the Senate.

Naturally, Trump latched onto this duty, zeroing in on missed opportunities for TV sizzle like a particularly hamfisted producer. Where past presidents, like Barack Obama, avoided floating shortlists of candidates to the public, Trump seemed to revel in the public speculation about which judges would be axed and which one would get the biggest prize in the game. Instead of letting officials confirm the pick with the press ahead of the announcement, he opted to leave viewers dangling until he appeared behind the podium.

To goose the anticipation a bit more, Trump even threw in a couple of teaser-y Twitter promos, reminding followers that he has “long heard that the most important decision a U.S. President can make is the selection of a Supreme Court Justice – Will be announced tonight at 9:00 P.M.” Those tweets belong to the same genre, in content and format, as tweets from “Bachelor” producers promising that tonight’s episode will be the most dramatic ever.

And what’s with past presidents announcing in some terrible morning time slot? Let’s move it to primetime.

When the show is real, keeping plot twists a secret can be challenging. Photos of the final “Bachelor” couple together might have leaked to Reality Steve months ago, just as Supreme Court watchers figured out that the pick was likely Kavanaugh when two other finalists were spotted in the Midwest not long before the live announcement in Washington. Still, Trump refused to break kayfabe and quietly admit the result ahead of time, as past administrations might have.

At least on Monday night he resisted reveling in his producing prowess, as when he gloated, “So, was that a surprise? Was it?” after announcing Neil Gorsuch’s nomination last year.

The heavily promoted primetime special, the ever-shrinking pool of questionable contenders, the arbitrary but rather tight deadline: it’s like a “Bachelor” season in quadruple time. The effect of this wasn’t just to whip up dramatic anticipation before the live announcement, but to reduce a complex and hugely consequential decision ― a lifetime appointment to the highest court in the land ― to a matter appropriately decided by the protagonist’s gut instincts.

This seems stupid as a strategy for finding a life partner, but at least then, a person only stands to hurt themselves. For all my ethical qualms about continuing to watch “The Bachelor,” the show has never threatened to undermine the voting rights of black and brown people or ensure the gutting of abortion rights. With a history of right-wing rulings ― like voting to uphold voter ID laws and to stop an undocumented teen from getting an abortion ― Kavanaugh is expected to consolidate the conservative majority on the Supreme Court, which could mean the destruction of precedents like Roe v. Wade.

At this point, it’s sheer cliché to note that Trump’s announcement style mimics the ratings-hungry tactics of reality TV. But each time, I’ve thought to myself, “‘The Bachelor’ seems like an absurdly slapdash way to start a low-stakes romantic relationship between two people. How could we possibly think this format is a good way to nominate a Supreme Court justice?”

The bread and circuses may distract us from the grim outcome. Out of 22 Bachelors, just one ― Sean Lowe ― is actually married to his fiancée from the show. (If Arie Luyendyk Jr. and Lauren Burnham make it down the aisle, that’ll make two, for a dazzling 9 percent success rate.) Yet no matter how pathetic the results, which are almost guaranteed by the shallow process, we keep tuning in for another season.

By the end of a “Bachelor” or “Bachelorette” season, though, the audience is usually exhausted with the lead, ready for someone new. As Trump experienced with “The Apprentice,” we can tire of the same old guy offering the same old twists and turns, even if he tries to spice things up with cameos from old favorites and celebrities like, uh, Maureen Scalia and Reagan-era Attorney General Ed Meese.

Monday night’s languid rerun of the Gorsuch nomination was hardly the greatest show on earth. When Trump’s announcement cut into the two-hour-long “Bachelorette” episode (Kufrin was narrowing the suitors to her final four), the Kavanaugh pick had already been spoiled. Aside from his guest stars, Trump mostly followed a standard script for introducing his choice.

Were we entertained? Not really.

This is good ― we shouldn’t be entertained by this. But as we’ve seen in reality TV, there’s more than one way this could play out. Ratings could plummet and the show could get canceled, or the show’s producers could start desperately throwing out crazier and crazier gambits to keep us hooked.

Even if ratings fall, the time to save ourselves from a solidly conservative Supreme Court, and a raft of decisions that will gut the rights of vulnerable people, has likely already passed by. We always learn too late how important it is to cast a really good lead.