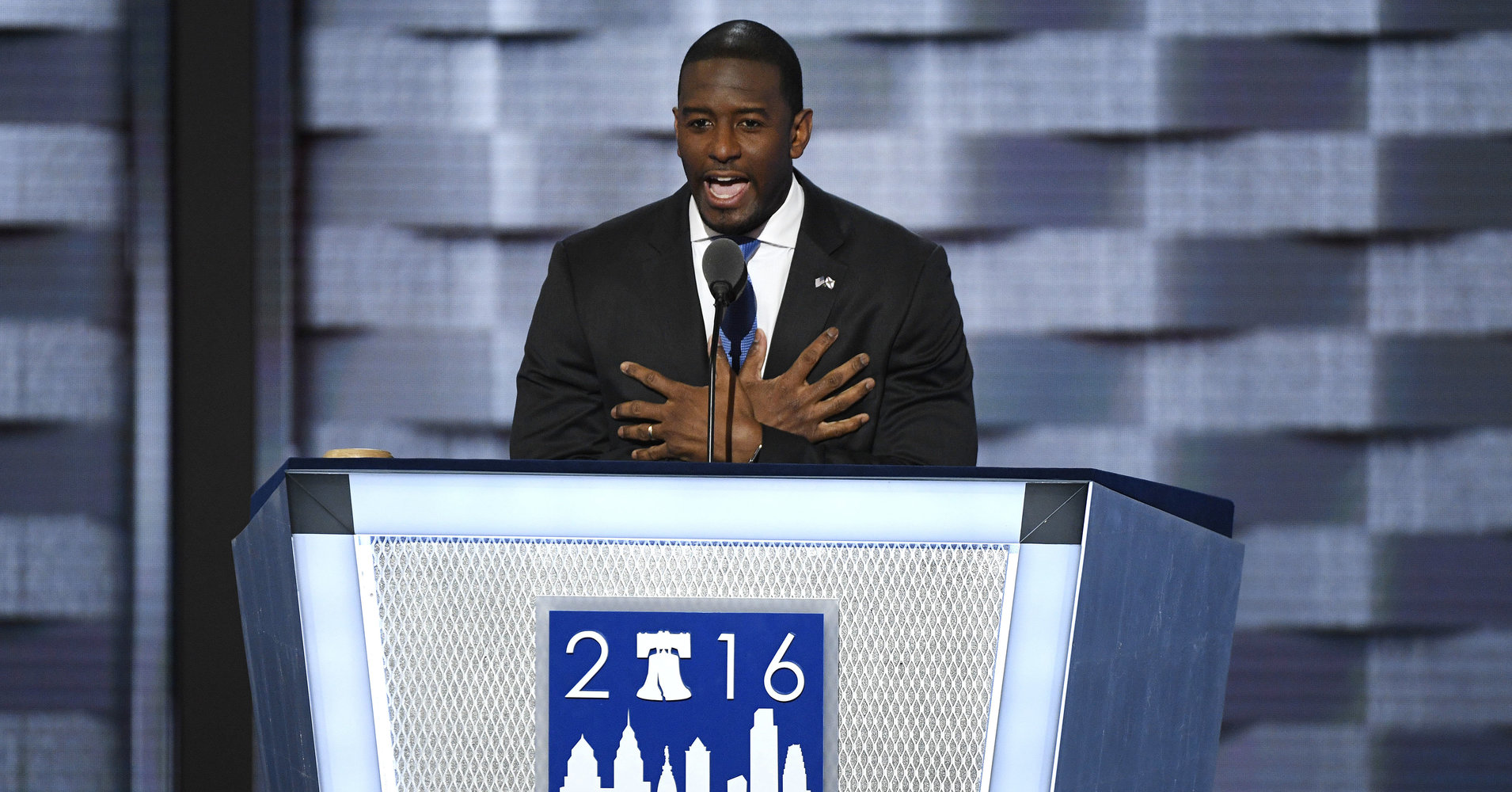 TALLAHASSEE, Fla. — The progressives’ darling candidate in the Democratic primary for Florida governor pushed to build a coal-fired power plant. He controls a political committee that accepts hundreds of thousands of dollars in untraceable “dark money.” He runs a city mired in an FBI corruption probe.

Liberal groups love Tallahassee Mayor Andrew Gillum anyway, showering him with endorsements and, in the case of environmental activist billionaire Tom Steyer, the promise of at least $1 million in help.

Gillum told HuffPost that he is proud of his record as a city commissioner and as mayor and is confident the investigation will show he has done nothing wrong. “I’ve got a zero tolerance for corruption,” he said. “I’ve been elected for 15 years by doing what’s right, not by doing what’s wrong.”

Neither in debates nor through his staff, though, has he offered a clear explanation for either the coal plant vote or the choice to accept money from secret donors.

“The mayor voted to give Tallahassee’s residents a say in that project, and he voted to help kill the plant. He’s glad it was never built,” campaign spokesman Geoff Burgan told HuffPost.

As to the secret donations, he said Gillum could not afford not to accept them. “He doesn’t have the resources to empty his bank account,” Burgan said, pointing out that, unlike his opponents, Gillum is not wealthy.

All five Democratic candidates running for governor have staked out similar positions on a number of issues important in Florida. All are running against the National Rifle Association and in favor of tighter gun restrictions. All favor alternative energy sources and want action on climate change. All support improved medical coverage, including an expansion of Medicaid in the state.

Most self-styled progressive groups have coalesced behind Gillum, despite his stands on the plant and dark money. Some have done so without making an attempt to interview or even contact the other candidates in the field.

“It’s like dating. We don’t go chasing people. If they want our endorsement, they come to us,” said Diane May, a spokeswoman for Our Revolution, a group founded by 2016 Democratic presidential candidate Bernie Sanders. “We endorsed Andrew Gillum because he’s a strong progressive.”

For progressives, particularly younger ones, Gillum’s appeal is that he’s a fresh face. He feels more exciting and less establishment than the types of politicians who usually get the party’s blessing. At 38, he is younger than the others in the field. As an African-American, he is the only non-white Democrat running. His public speaking style is more engaging, more rousing than that of his colleagues, and he makes frequent mention that he is the first in his family to graduate from high school, let alone college, and that he is the only non-millionaire or billionaire in the race.

“Andrew Gillum has a long record of fighting corporate money in politics, and he’s a champion for working people against big money interests. We’re proud to support him,” said Stephanie Taylor, a co-founder of the Progressive Change Campaign Committee.

Still, neither Our Revolution nor the PCCC could address why they backed Gillum in a crowded field despite his actions on issues that are normally seen as troublesome in a Democratic primary.

Putting an end to dark money — contributions to politically active nonprofits that never have to disclose the names of their donors ― has been a rallying cry for progressives ever since the 2007 Wisconsin Right to Life Supreme Court case cleared the way for 501(c)4 groups to spend money on elections. Gillum himself criticized such groups. Just before a February debate, he wrote on Twitter, “It’s only a matter of time before we see dark money flowing into Florida to silence the voices of Florida voters.”

Nevertheless, he is the only Democratic candidate accepting significant amounts of secret money into his unlimited-dollar campaign committee. Thus far, his Forward Florida PAC has accepted $266,000 in donations from Collective Future and $100,000 from Opportunity to Learn Action Fund, according to a HuffPost analysis of Florida campaign finance records.

Former North Florida Rep. Gwen Graham’s campaign said it has not accepted any secret-money donations, and the other three Democratic candidates are multimillionaires and a billionaire who are largely self-funding their campaigns.

Collective Future’s stated mission is to help African-American candidates win office. Opportunity to Learn is a group that supports public education and had Gillum on its board for several years, ending in 2017. HuffPost contacted both organizations, but neither would disclose the donors whose money was given to Gillum’s committee.

The two secret-donor nonprofits are among the five largest contributors to Forward Florida — the largest is billionaire George Soros, who has given $700,000 — and together account for 16 percent of funds it has received.

Gillum has a similar discrepancy between words and deeds on the environment. As a city commissioner in 2005, he supported the construction of a coal-fired power plant for use by the city-owned utility in Taylor County, about 50 miles away on the Gulf Coast. While the environmental community was united in opposition, he worked to forge a compromise that allowed the proposal to move forward.

At a June Democratic debate, he said he later voted against the plant. “That coal-fired plant never got built, thanks to me and my colleagues who ultimately opposed it,” he said.

In reality, however, it took the 2006 election of Republican Gov. Charlie Crist — who later switched parties and is now a Democratic congressman — to kill the coal plant over his climate change concerns and his willingness to throw up stricter permitting requirements.

Despite this, Steyer’s group NextGen America last month chose to endorse Gillum and pledged $1 million in support, even though Steyer has argued that climate change should be a defining issue in today’s politics.

Sean McElwee, a co-founder of the Data for Progress think tank, said he doesn’t understand Steyer’s methodology in choosing candidates. “He’s sort of doing what the Koch brothers did on the right,” he said of the libertarian industrialists Charles and David Koch, known for spending hundreds of millions of dollars to elect conservative candidates. “‘If you’re willing to say some progressive bullshit, I’ll throw some money at you’ … Gillum has said all the right things.”

Matt Harringer, a Graham campaign spokesman, said that neither the Progressive Change Campaign Committee nor Our Revolution reached out to her before endorsing Gillum. He said Graham and Steyer had a phone conversation this spring and that she had believed Steyer was not going to endorse anyone in the primary.

“I can’t speak to their processes,” he said of the progressive groups. “We hope we get a fair shake from all the groups … We certainly want help in the general election.”

While climate change and dark money matter a great deal to Democratic voters, Gillum’s biggest vulnerability if he wins the nomination could be the ongoing public corruption investigation into Tallahassee’s spending of public money on a private development.

He said he has been told he is not a target of the FBI probe, but one of his closest friends and a former political ally has been the subject of federal subpoenas examining a restaurant he developed in part using city money. Gillum traveled to Costa Rica with the developer and another lobbyist, staying at a $1,400-a-night luxury resort and later saying he paid for his share of the bill in cash.

Critics have also raised concerns about P&P Communications, Gillum’s outside employer during the period he has been in city government. He said he primarily developed educational curriculums for the company but refused a HuffPost request to name his clients.

The company does not appear to have a website and is not well known in the capital — but has received $35,938 in rent from Gillum’s campaign since it began in March 2017, according to Florida campaign finance records.