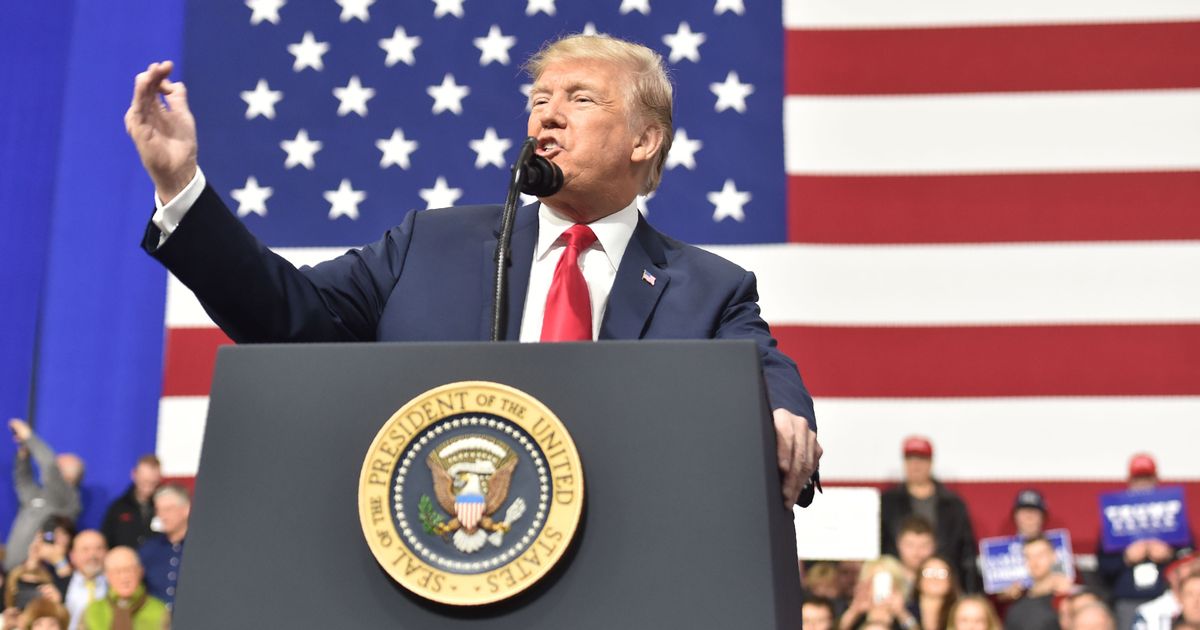 Donald Trump says he intends to run for re-election in 2020 – and doesn’t think anyone can beat him.

When asked by Piers Morgan whether he was going to run, the US President said: "Well I fully intend to. It seems like everybody wants me to."

Trump said he did not see any Democrat who could beat him, in the interview, published in the Mail on Sunday.

Trump also said his meeting with the Queen was "elegant, very beautiful" and "really something special".

The US President also took the extraordinary step of disclosing details of his private chat with Her Majesty.

In an interview with Piers Morgan on board Air Force One before he flew to Scotland yesterday, Trump revealed the two discussed Brexit.

In the Mail on Sunday, Trump said: "She said it’s a very – and she’s right – it’s a very complex problem, I think nobody had any idea how complex that was going to be… Everyone thought it was going to be ‘Oh it’s simple, we join or don’t join, or let’s see what happens..’"

When asked whether the Queen gave any clue as to which way she thinks about the UK’s divorce from Europe, Trump reportedly ‘clammed up’.

He added: "I’ve heard very strongly from a lot of people, you just don’t talk about that conversation with the Queen, right? You don’t wanna do that."

Instead, Trump said the monarch is "an incredible woman… so sharp… so beautiful, when I say beautiful – inside and out. That is a beautiful woman."

The interview will air on Good Morning Britain on ITV on Monday morning.

He said: "I get along with him great, yeah. He’s very smart, great personality, he’s funny and tough, good negotiator."

Pressed on whether Kim was ‘a ruthless dictator’, Trump said: "Sure he is, he’s ruthless, but so are others."

TV host Morgan tweeted on Friday: "I’ve been on a few fancy planes in my time but nothing quite like this one."

Air Force One was held on the tarmac at Stansted Airport for 30 minutes for the conversation between the two.

The interview is thought to be an exclusive for ITV and comes less than a day after Trump disparaged May’s Brexit negotiating to The Sun.

In that incendiary interview the American commander-in-chief also said Boris Johnson would be a ‘good Prime Minister’ and blamed London mayor Sadiq Khan for not tackling terrorism in the capital.

The US president, alongside his wife Melania, enjoyed afternoon tea with the Queen at Windsor Castle before flying off to Scotland where he will spend two nights.

Before the flight took off Trump took part in an interview with Good Morning Britain presenter – and Trump fan – Piers Morgan aboard Air Force One.

Trump will play golf at one of his courses between now and his flight to Helsinki – to meet with Russian President Putin – on Sunday.

Meanwhile organisers claimed 250,000 protesters lined the streets of London to register their disdain for the 45th president. That figure has not been verified.

Trump, who falsely claimed he ‘predicted ‘ Brexit the day before the vote in June 2016, said “As far negotiating the deal I probably would have done what my suggestion was to the Prime Minister, but she can always do that. She can do what I suggested to her.

But he claimed the Prime Minister had responded: “Don’t worry, it’s only the press.”