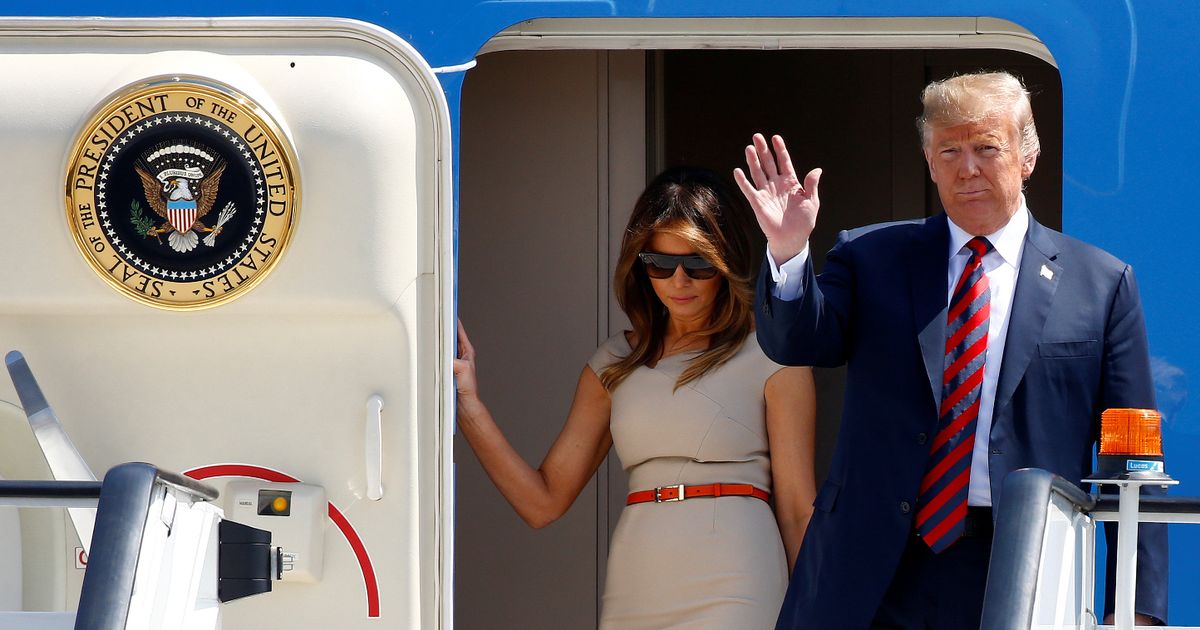 Donald Trump has touched down in the UK for his historic first visit amid huge nationwide protests and a massive 10,000-strong police protection ring.

The US President was met at Stansted Airport by International Trade Secretary Liam Fox before travelling by helicopter to Winfield House – the US Ambassador’s grand residence in London.

He and First Lady Melania Trump held hands as they walked down steps provided by private firm Harrods Aviation and through a military guard.

Air Force One landed more than an hour late after the President delayed the start of his four-day visit with a rambling impromptu press conference where he boasted Brits "like me a lot".

Speaking as he left the NATO summit in Brussels, billionaire Trump also described himself as a "stable genius" – again – and claimed he had secured extra defence funding from western allies.

The US President then threw a grenade into the Brexit debate by casting doubt on whether Theresa May’s ‘soft Brexit’ deal – currently facing mutiny from her own party – is "what [the people] voted for".

Sandwiching his visit between NATO and a meeting with Russia’s Vladimir Putin, Trump said: "Putin may be easiest of them all – you never know. I’m going to a pretty hot spot right now with a lot of resignations."

The trip – a lower-key ‘working visit’ – is Trump’s first as President and was long-delayed. UK Prime Minister Theresa May originally vowed to hold a full State Visit before the end of 2017, but it was put back amid outrage at Trump’s policies against Muslims and migrants.

Trump has not ruled out visiting Boris Johnson – who resigned as Foreign Secretary over Theresa May’s new soft Brexit plan just days ago.

But his first engagement is meeting embassy staff in Regent’s Park.

There he and Melania were expected to be greeted by a noisy protest with people banging pots and pans as the pair stay there tonight following a lavish banquet at Blenheim Palace, the birthplace of Winston Churchill.

It had initially been believed the US president would snub London for the bulk of his trip – avoiding the hundreds of thousands of protesters who are expected to gather in the capital.

This morning Trump was asked what he thought of the protests and replied: “It’s fine, they like me a lot in the UK – They agree with me on immigration."

Trump’s military entourage arrived at Stansted well before the President due to the delay – with three US Marines MV-22 Osprey helicopters and two VH-60N White Hawk helicopters waiting for him, along with his motorcade.

The visit, which was downgraded from a state visit to a "working" trip, will see the couple visit Winfield House before departing for Blenheim Palace today.

The president and his wife Melania will be guests of honour at a dinner for around 100 guests hosted by Prime Minister Theresa May in the spectacular setting of Blenheim Palace in Oxfordshire.

The event will begin with a military ceremony in the Great Court of the Palace, where the bands of the Scots, Irish and Welsh Guards will play the Liberty Fanfare, Amazing Grace, and the National Emblem.

On the menu is Scottish salmon, English Hereford beef fillet and veg and strawberries and clotted cream ice cream.

The couple will then spend Thursday night at the US Ambassador’s residence near Regent’s Park.

It seems unlikely that the President will come close enough to Westminster to see a “Trump baby” blimp which protesters plan to fly over the Houses of Parliament, after receiving permission for the stunt from London Mayor Sadiq Khan .

Protesters say they plan to play recordings of crying immigrant children from the Texas border.

Police protecting the President during his UK visit have hit out at the ‘dire’ conditions they are being forced to sleep in – branding them ‘worse than prison.’

Officers complained they were unable to charge their phones, enduring freezing cold showers and crammed in with 300 others in one room – getting only a few hours’ sleep ahead of 12 hours shifts.

Shadow Policing Minister Louise Haigh raised the dire conditions in the House of Commons – warning there had been a "significant reduction" in the number of officers from forces across the country.

She questioned a Tory minister: "Is he satisfied our policing system – having lost over 21,000 officers – is resilient enough to cope with the additional demand this weekend?"

The ‘third way’ plan for UK customs rules proposed keeping the UK closely aligned with the EU in a new "free trade area" for goods.

This will include sharing a "common rulebook" for all goods including agricultural and food products – and a possible compromise on migration.

To appease Brexiteers, Parliament would keep the right to block future changes to the trading rules.

But Brexiteers were enraged by this close link with Brussels and David Davis said this olive branch was meaningless in practice.

The deal also proposes a "common rulebook" with the EU on state aid rules, and agrees to "step up" backup plans for a No Deal Brexit. A full White Paper was due to be published on Thursday 12 July.

Tomorrow Mrs May and Mr Trump will visit an unnamed defence site to view a demonstration of capabilities and equipment by UK and US Special Forces.

They will then move on to Chequers for showdown talks on Russia, trade, Brexit and the Middle East, followed by a press conference. Trump will also have a working lunch with Theresa May at her country residence.

Meanwhile Melania Trump will spend the day in London with Mrs May’s husband Philip despite the capital hosting huge protests against the President.

The pair will visit veterans and school children at an undisclosed location in the capital.

There will be huge protests on Friday evening.

Momentum – the left-wing campaign group that swept Jeremy Corbyn to power – are organising a protest on Friday evening in London and around the country – including the small Welsh town of Llangollen, the Orkney Islands in Scotland and a beach protest in Poole.

Labour leader Jeremy Corbyn is not scheduled to appear at any protests. He is thought to be in his north London constituency tomorrow and the Durham miners’ gala on Saturday.

Meanwhile civil servants in Whitehall and staff in Parliament have been warned of disruption ahead of Trump’s visit.

Parliamentary staff have been warned high-security gates will be shut before protests begin in the area tomorrow.

Trump is expected to spend the entire weekend at one of his two Scottish golf resorts.

The president and first lady will fly on Friday evening to Scotland and arrive at Prestwick greeted by David Mundell.

On Sunday, Trump is expected to move on to Finland ahead of his keenly-awaited summit with Russian President Vladimir Putin in Helsinki on July 16.