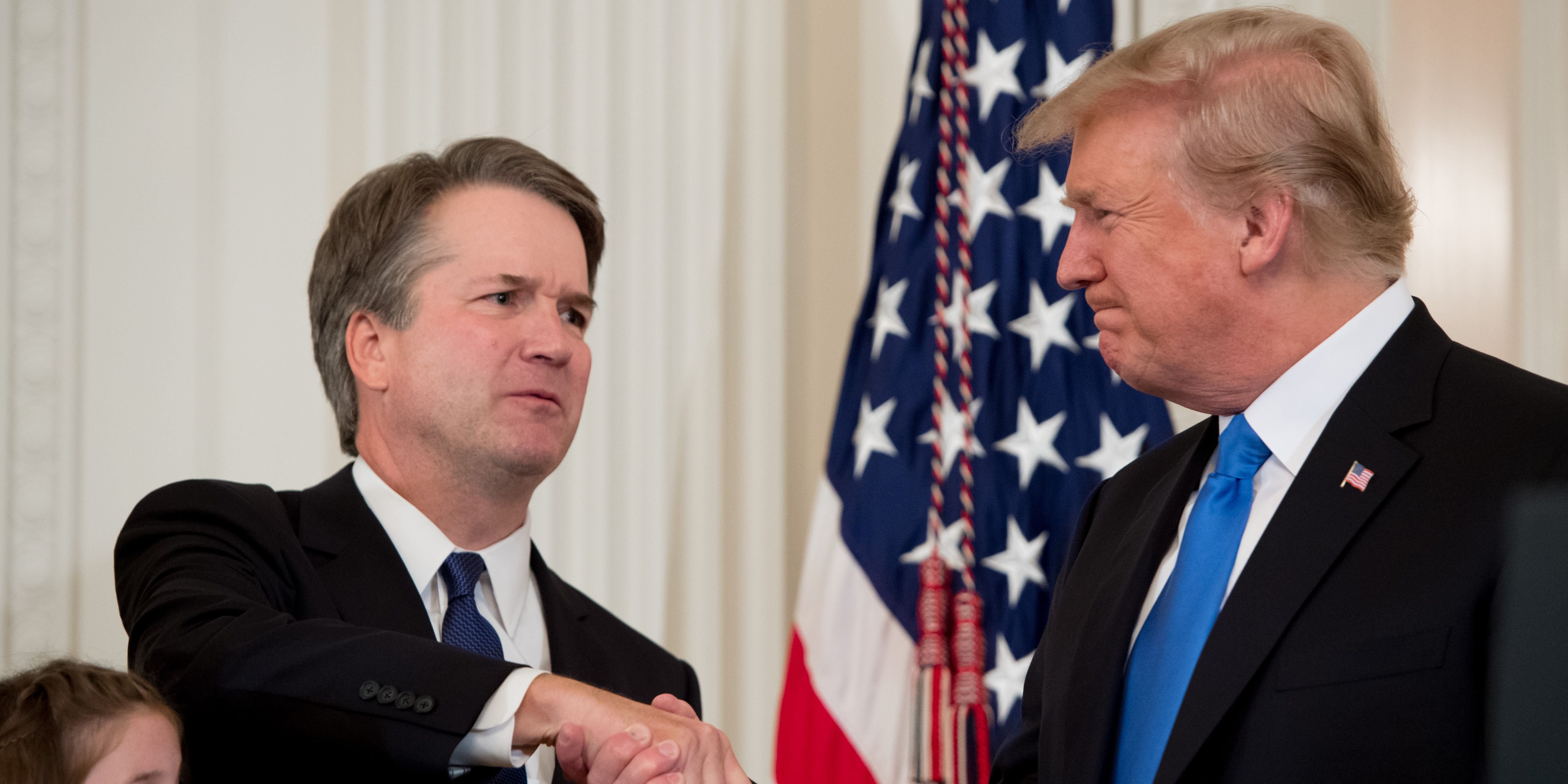 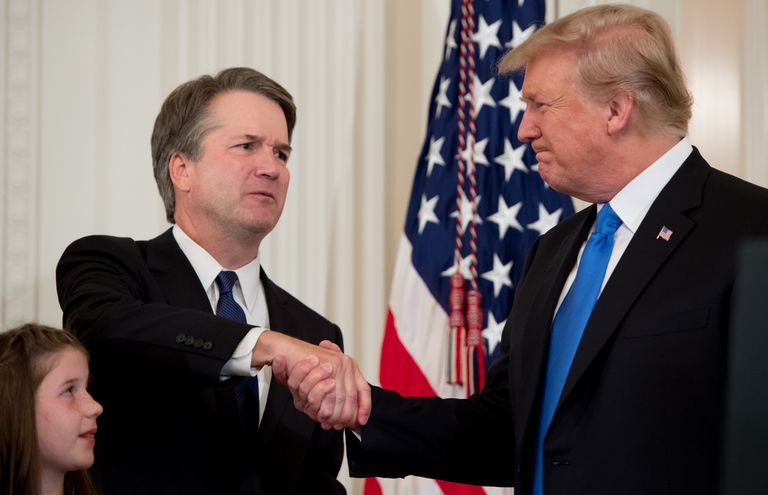 After days of building suspense in the type of spectacle far more common to reality television than national politics, President Donald Trump finally announced that D.C. Court of Appeals Judge Brett Kavanaugh is the next nominee for the United States Supreme Court. Kavanaugh, a longtime conservative operative who was once legal counsel and staff secretary to former President George W. Bush, could be seen as a fitting replacement for Justice Anthony Kennedy. After all, he even clerked for the retiring justice for a term in 1993.

In comparison to a short-listers like Amy Coney Barrett, who once signed onto a letter committing herself to promoting traditional gender roles and life at conception, or Raymond Kethledge, who rejected the Equal Employment Opportunity Commission’s argument in a racial-discrimination case, Kavanaugh appears to be the least extreme candidate in the pool. Is it possible that, despite everything, President Trump may actually be putting a Kennedy-esque moderate Republican on the bench?

Probably not. And even if he were, that’s not such good news, either.

The fact that Kennedy, who was nominated by Republican President Ronald Reagan, was eventually the swing vote on the Supreme Court is less a testament to the justice’s moderate beliefs and more a sign of how far right the GOP has lurched over the last decade. Kennedy served as a majority vote in a number of cases such as Obamacare or marriage equality where all but the most fringe of the right in the U.S. already agreed.

He may have been no friend to far-right social conservatives–they saw him as a vote against overturning Roe v. Wade when presented with the opportunity in Planned Parenthood v. Casey, in which he agreed with the majority that abortion could be restricted but was still a constitutional right, he failed them again when he sided with the liberal wing to keep abortion clinics in Texas open in Whole Women’s Health v. Hellerstedt, and of course they are still seething over Obergefell v. Hodges, which allowed same-sex couples across the U.S. to get legally married.

Yet for every case where the right feels Kennedy failed them, that he wrongfully sided with the liberals and against the constitution, progressives can cite more where he disappointed them as well.

In just his final session on the bench, Kennedy consistently backed the conservative wing of the court. In Janus v. AFSCME he helped undercut the bargaining and political power of unions by reducing the obligation to pay dues—even overturning precedent to do it. In NIFLA v. Becarra Kennedy allow crisis pregnancy centers to avoid truth-in-advertising regulations by claiming it was their religious freedom to refuse to follow California’s laws guiding them. And in Masterpiece Cakeshop he set the stage for businesses to refuse service to gay couples due to religious objections, a precedent that may well undermine the very marriage equality ruling he backed a few years earlier.

As the multi-million-dollar ad blitz begins, Kavanaugh proponents will be promoting him as a “Yale grad, confirmed with bipartisan support” who is “strong and independent.” They will use his limited record of rulings on key social issues like abortion rights, health care, and LGBTQ issues as a mask to portray him as noncontroversial, and cite cases where he may have conflicted with some of his conservative colleagues as signs of a centrist who could bridge that gap on the bench between the left and the right.

That mask won’t stand up to much scrutiny, however. Kavanaugh may lack a proven court record when comes to his views on the constitutionality of abortion, but anti-abortion groups are certain that President Trump followed through on his promise to nominate only judges who would overturn Roe v. Wade.

“Based on his strong, twelve-year record on the U.S. Court of Appeals for the D.C. Circuit, we believe that Judge Kavanaugh will be an originalist Justice, committed to the text of the Constitution and to the rule of law, including legal protections for human life,” said Americans United for Life (AUL) president Catherine Glenn Foster in an email statement. “This is a seminal moment for America. It’s a crucial chance to shift the Court back to a majority that does not look to Roe and Casey–two of the worst examples of judicial activism–as their legacy.”

Kavanaugh’s one brush with an abortion ruling–in which he broke with colleagues who granted a pregnant immigrant minor access to an abortion–supports Glenn Foster’s assumption. In his dissent, Kavanaugh wrote that, “The Government has permissible interests in favoring fetal life, protecting the best interests of a minor, and refraining from facilitating abortion.” The idea of the government having interests in “favoring fetal life” is the key component that allows restrictions on abortion under the current framework of Roe and Casey, and if the courts start to apply more weight to that interest and less to the right of the pregnant person, that could be the start of the unraveling of the constitutional right to an abortion.

While much of Kavanaugh’s legal paper trail has involved ruling on regulatory issues–opposing net neutrality, limiting the power of the Environmental Protection Agency, and finding other instances where he believes the government overstepped its boundaries–there are enough clues in his limited non-regulatory rulings to show a justice who is poised to end the Affordable Care Act by giving the president the power to decline to enforce statutes upholding it, restrict abortion access by promoting “fetal life” interests, and stonewall any attempts at meaningful gun restrictions, if his dissent on the D.C. automatic weapons ban is any indication.

But most alarming is Kavanaugh’s record on religious freedom. His support of the plaintiffs in Priests for Life v. Health and Human Services (one of the individual cases eventually rolled into Little Sisters of the Poor)–in which religious organizations claimed to be burdened by being asked to sign a paper stating they would not allow birth control coverage in their insurance plans–shows a willingness to expand religious objections and conscience protections even if it means limiting others’ civil rights that goes even beyond what Kennedy signaled in the Masterpiece Cakes or NIFLA decisions. With the Trump administration poised to allow religious health care organizations to receive Title X family planning funding, future reproductive decisions like contraception, sterilization, and STI treatments may soon be in the hands of medical practitioners who can refuse care due to gender, sexual orientation, or even just because a person is unmarried.

Kennedy was no friend to equal rights, and Kavanaugh will be following in those footsteps–and will probably go even further. Yet the Trump administration and its allies are prepared to present Kavanaugh as an “independent” justice, rewriting Kennedy’s history even as they try to paint Kavanaugh as a moderate.

But don’t be fooled. Kennedy was no true centrist, and Kavanaugh is even less so. And falling for it will put your civil rights, your health, and maybe even your life in jeopardy.

Robin Marty is the co-author of Crow After Roe: How “Separate But Equal” Became the New Standard in Women’s Health and How We Can Change That. Follow her on Twitter.