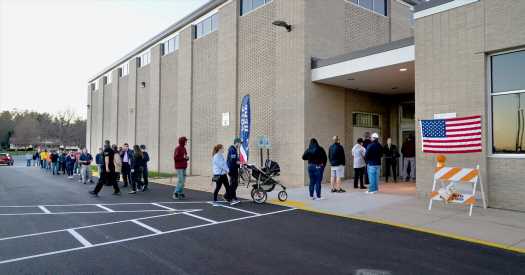 Hours after President Trump repeated a baseless report that a voting machine system “deleted 2.7 million Trump votes nationwide,” he was directly contradicted by a group of federal, state and local election officials, who issued a statement on Thursday declaring flatly that the election “was the most secure in American history” and that “there is no evidence” any voting systems were compromised.

The rebuke, in a statement by a coordinating council overseeing the voting systems used around the country, never mentioned Mr. Trump by name. But it amounted to a remarkable corrective to a wave of disinformation that Mr. Trump has been pushing across his Twitter feed.

The statement was distributed by the Department of Homeland Security’s Cybersecurity and Infrastructure Security Agency, which is responsible for helping states secure the voting process. Coming directly from one of Mr. Trump’s own cabinet agencies, it further isolated the president in his false claims that widespread fraud cost him the election.

The statement also came as a previously unified Republican Party showed signs of cracking on the question of whether to keep backing the president.

Across the country, election officials have said the vote came off smoothly, with no reports of systemic fraud in any state, no sign of foreign interference in the voting infrastructure and no hardware or software failures beyond the episodic glitches that happen in any election. President-elect Joseph R. Biden Jr.’s lead in the popular vote has expanded to more than five million, and he remains on track to win a solid victory in the Electoral College.

The group that issued the statement was the Elections Infrastructure Government Coordinating Council, which includes top officials from the cybersecurity agency, the U.S. Election Assistance Commission and secretaries of state and state election directors from around the country. The group also includes representatives from the voting machine industry, which has often been accused of being slow to admit to technological shortcomings and resistant to creating paper backups.

“While we know there are many unfounded claims and opportunities for misinformation about the process of our elections, we can assure you we have the utmost confidence in the security and integrity of our elections, and you should, too,” the officials added in their statement. “When you have questions, turn to elections officials as trusted voices as they administer elections.”

In 2020, in part because of the vastly increased use of mail-in ballots, more than 92 percent of votes had some form of paper backup that can be used in audits or recounts.

The council was responsible only for the security of the actual election infrastructure — the voting machines, the scanners and the counting systems for ballots. So its statement did not encompass the full range of Mr. Trump’s accusations — rebutted by elections officials across the country — of other types of voting fraud, most notably that mail-in ballots were manipulated to give an advantage to Mr. Biden.

But Mr. Trump’s tweet on Thursday morning, citing an unsubstantiated report from One America News Network, which has backed Mr. Trump’s claims without skepticism, suggested that machines made by Dominion Voting Systems systematically deleted 2.7 million votes. His post immediately generated a warning from Twitter.

The basis of Mr. Trump’s claim was an error made in a county in Michigan, which initially miscounted a vote total in Mr. Biden’s favor. It was a human error, and it was quickly caught and corrected.

The Dominion software was used in only two of the five counties that had experienced Election Day hiccups in Michigan and Georgia. In every instance, there was a detailed explanation for what happened, most of it human error. In none of the cases did software affect the vote counts.

The council’s statement on Thursday was prompted by repeated “baseless claims of voter fraud that none of us have seen any evidence of,” said one the federal officials who signed it, Benjamin Hovland, the chairman of the U.S. Election Assistance Commission.

Mr. Hovland said that the group was aware of Mr. Trump’s tweet about the Dominion systems before it published its statement, but that it was only one of many statements that had disturbed the group for days.

“What you see happening right now,” Mr. Hovland added, “is playing right into the hands of our foreign adversaries who want to see us lose faith in our democracy.”

It was not the first time that government agencies have taken on Mr. Trump’s falsehoods. In July, the Food and Drug Administration warned against the use of hydroxychloroquine to treat the coronavirus after Mr. Trump had embraced its use. The president was angry, but the head of the agency has survived.

Many of the charges of fraud, illegal voting and software troubles have come from Mr. Trump and his sons.

Donald Trump Jr., the president’s eldest son, called for “total war” in Georgia over what he claims is election fraud. Eric Trump shared conspiracy theories that poll workers in Arizona gave Trump voters Sharpie pens that could not be read by ballot scanners, a claim that was quickly debunked by Arizona’s secretary of state. The president’s supporters have sent death threats to poll workers in Pennsylvania.

Yet both before and after Election Day, Mr. Trump has been repeatedly contradicted — though never named — by the Department of Homeland Security’s cyberagency, as it has sought to dispel disinformation. The agency’s director, Christopher Krebs, had led the charge to secure election machines, registration systems and tabulation systems across the 50 states, sending experts to help and testing systems for vulnerabilities.

Mr. Krebs also argued that his agency had to counter the “hacking of minds as well as infrastructure,” and he created a “rumor control” page on his agency’s federal government website. It has repeatedly contradicted Mr. Trump, explaining why mail-in ballots do not lend themselves to fraud, and how states assure that the dead do not cast ballots.

Mr. Krebs, a former Microsoft executive with a quick wit and a willingness to resist political pressure, did not back down when these efforts created a backlash in the White House. And he was praised in public recently by the acting secretary of homeland security, Chad F. Wolf, for the “rumor control” effort.

Mr. Krebs has widely been rumored to be on the hit list of officials who may be fired by the White House, along with the C.I.A. director, Gina Haspel, and the F.B.I. director, Christopher A. Wray. But so far, the boom has not been lowered.

One of Mr. Krebs’s top deputies, Bryan Ware, the assistant director for cybersecurity, submitted his resignation on Thursday.

In a statement, Lily Adams, a spokeswoman for the Democratic National Committee, said, “It has always been clear that this election was free, fair and secure, and now even Trump’s own Department of Homeland Security has fact checked his lies.”