Home » Politics » Here's how much the Mueller investigation cost taxpayers

Here's how much the Mueller investigation cost taxpayers

Nothing new expected out of Mueller on Capitol Hill

Fox News contributor Andrew McCarthy on the fallout from the Mueller report and Robert Mueller’s upcoming testimony on Capitol Hill.

Almost four months after concluding his two-year-long investigation into Russian interference in the 2016 election, special counsel Robert Mueller will testify on Capitol Hill before the House and Senate this week about the wide-ranging probe.

While speaking before the House Intelligence Committee on Wednesday — after weeks of negotiations — Mueller answered questions from Democrats looking to convince the public, and some of their Democratic colleagues, that the House should pursue an impeachment trial against President Trump, and from Republicans looking for the special counsel to exonerate the president.

In his opening remarks, Mueller did neither: "The finding indicates that the president was not as exculpated for the acts that he allegedly committed," he said. "It is not what the report said."

Mueller concluded his investigation in March, and since the release of the 448-page report in mid-April, he has mostly has sought to avoid the spotlight, instead allowing the text to speak for itself.

The redacted report recounted 10 episodes involving Trump and delves into legal theories for connecting these actions to an obstruction offense. However, Mueller never made a prosecutorial judgment regarding this allegation. 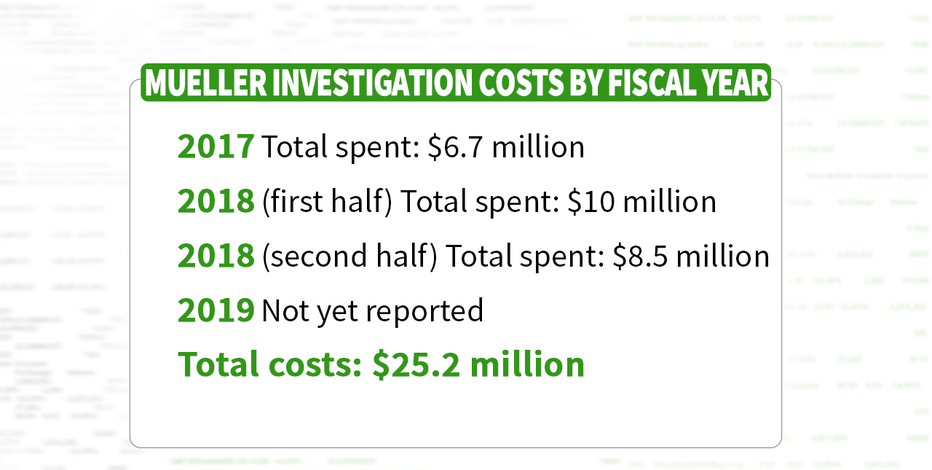 According to biannual reports released by the special counsel’s office, Mueller and his team spent $12.3 million in direct spending between his appointment on May 17, 2017 and Sept. 30, 2018. The office also said it incurred $12.9 million in “indirect” Justice Department spending, a category it described as “neither legally required” for disclosure, nor reported in filings by previous special counsels.

Mueller’s office said the indirect expenses did not amount to additional taxpayer expenditures since these resources would have been devoted to other cases, such as personnel at the FBI, if there had been no special counsel investigation.

On average, the office spent roughly $8.4 million per each six-month period. If the final statement — which has still not been released — remains on par with previous costs, total spending from the investigation is expected to reach $34 million in both direct and indirect spending.

The Brexit Vote: How much should we care?

Here’s how much 2020 Democratic candidates have raised

Russia cyber actors ‘very active’: Here’s how the US will play defense

Here's how much workers in other countries need to retire

How the partial government shutdown came to be: A look behind the scenes
Politics
Industies News