Iran on Friday said it seized a British oil tanker and its crew amid reports it diverted a second tanker towards Iran within hours of the seizure in a clear message to the UK and the US that they’re willing to get aggressive in a feud over oil sanctions. But they may soon have to contend with heavy US and UK naval firepower already in the region.

The US sent its USS Abraham Lincoln aircraft carrier and attached strike group to the region in May. This represents the world’s most potent unit of naval power, with the aircraft carrier’s formidable air wing, a cruiser, four destroyers, a cruiser, and support ships.

The USS Boxer, a smaller carrier for AV-8B Harrier jets and helicopters, is also operating nearby andsaid it recently downed an Iranian drone.Iran denied this and posted video of one of its drones landing to challenge the US’s narrative, although it’s unclear if Iran’s footage proves anything.

The UK has the HMS Montrose on station, which immediately following the seizure of the tankers was broadcasting its location and sailing through the Strait of Hormuz. TheUK has another two warships on the way.

Previously, the UK’s Montrose got into a standoff with Iranian gunboats trying to veer an oil tanker called the “British Heritage” into Iran’s waters. The Montrose aimed its 30 mm guns at the Iranian fast attack craft swarming the tanker and warded them off. 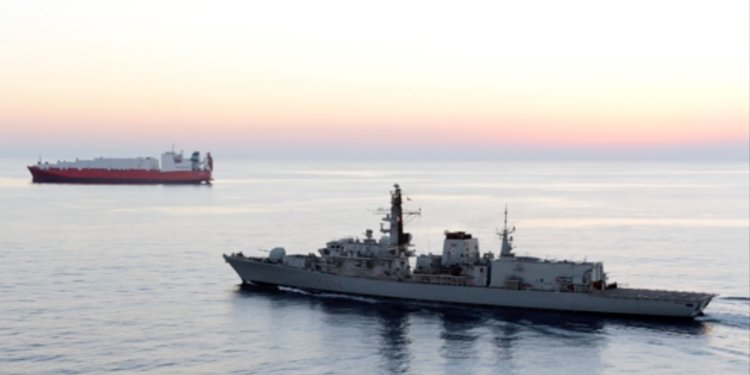 In this image from file video provided by UK Ministry of Defence, British navy vessel HMS Montrose escorts another ship during a mission to remove chemical weapons from Syria at sea off coast of Cyprus in February 2014. The British Navy said it intercepted an attempt on Thursday, July 11, 2019, by three Iranian paramilitary vessels to impede the passage of a British commercial vessel just days after Iran’s president warned of repercussions for the seizure of its own supertanker. A U.K. government statement said Iranian vessels only turned away after receiving “verbal warnings” from the HMS Montrose accompanying the commercial ship through the narrow Strait of Hormuz. (UK Ministry of Defence via AP)Associated Press

Retired US Navy Capt. Rick Hoffmantold Business Insider’s Ryan Pickrell that the 30 mm guns, were the “perfect weapon” against these type of ships.

But the US’s aircraft carriers can do better than perfect. With helicopter gunships launched off the Boxer or Lincoln,the US could easily destroy any number of Iranian fast-attack craft.

In June, Iran shot down an expensive US surveillance drone with a surface-to-air missile. The Pentagon drew up plans for a retaliatory attack on Iran, but President Donald Trump said he canceled it upon hearing how many Iranians would die.

But nowIran holds at least 23 sailors captive after seizing the vessel. The UK’s top leaders on Friday held an emergency meeting to decide how to proceed.

Iran frequently talks about sinking US aircraft carriers, and its navy holds the operational goal of destroying the US Navy, but Sim Tack, a researcher at Stratfor, a geopolitical consulting company, told Business Insider that the US had deployed its carrier smartly.

“The US is being very smart about how it’s deploying its carrier. It prefers to keep its carrier in the Arabian Sea rather than the Persian Gulf. There are more open waters there, so they’re not putting themselves in the Persian Gulf where their movement is a lot more restricted.” 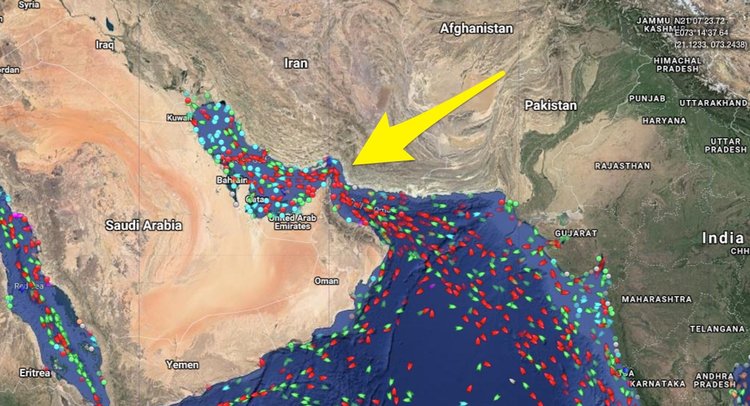 Map showing marine traffic in the Strait of Hormuz on July 5, 2019.MarineTraffic.com/Business Insider

Because of the long range of the US’s carrier aircraft, the US can strike Iran from far off in the Arabian Sea without risking getting mined or submarine attacks that Iran may launch within their home waters, according to Tack.

Read more:Iran’s gunboat challenge against a British tanker could have caused a massive explosion and billions in damages

“Iran doesn’t have an air force of its own that’s capable of withstanding these aircraft,” said Tack. “That element of air defense is extremely outdated and incapable from Iran.”

Additionally, US ships in the region have potentially more than 400 Tomahawk cruise missiles, which each have a range of greater than 1,000 miles. The US used these missiles twice in strikes against neighboring Syria.

It’s unclear if the US or UK will launch a rescue mission to free the captive sailors, but the considerable naval firepower in the region means that Iran’s attempts to hijack oil tankers could start a naval fight.

Commenting on the tensions in the region, Trump said Friday that US ships are “the most deadly ships ever conceived and we hope for [Iran’s] sake they don’t do anything foolish. If they do they’re going to pay a price like nobody’s ever paid a price.”

Turkey Holds Out on Releasing American Pastor in Talks