On the day of President Joe Biden’s inauguration, 27-year-old Ashley Vanderbilt was glued to her television screen.

The stay-at-home mom from Myrtle Beach, South Carolina — a devoted follower of the QAnon conspiracy theory — was awaiting an explosive event.

“I was convinced that we were going to have a blackout and the emergency broadcasting system would go off,” she told Insider. “Joe Biden, the politicians there, the Hollywood elites, they would all be arrested.”

Vanderbilt stocked up on groceries, filled her car up with gas, and prepared herself for the advent of ‘The Storm.’

The Storm is the day on which many QAnon followers expected former President Donald Trump to miraculously hold onto power, arrest liberal elites, and execute those considered to be traitors.

QAnon forums had predicted that following the deadly US Capitol insurrection, the prophesized reckoning would occur on Inauguration Day. 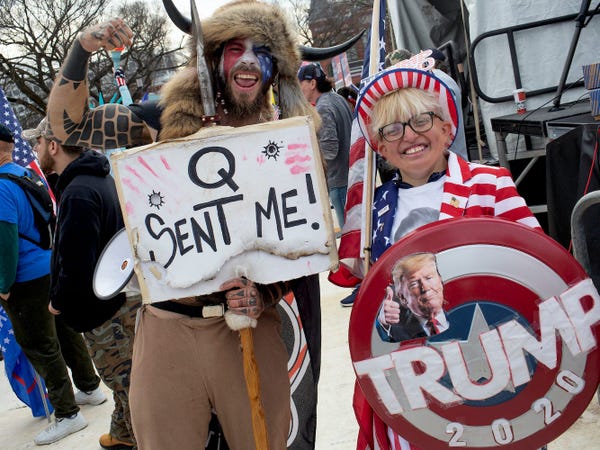 “When Kamala Harris was sworn in, I started to get a little nervous,” Vanderbilt told Insider.

Then, her television glitched. “It froze and my heart dropped,” Vanderbilt recalled. “I thought: ‘Oh my god, it’s going to happen.'”

She then watched horrified as Biden, to her disbelief, was sworn into office.

“I started crying, the tears were flowing, I couldn’t stop,” Vanderbilt said.

For many adherents of the QAnon conspiracy theory, as Vanderbilt once was, Inauguration Day was the realization of their worst fears.

Like other QAnon believers, Vanderbilt believed Biden’s victory would have terrifying consequences.

“I thought that anybody who was registered as a Republican would get sent off to reeducation camps,” she told Insider. “The Democrats were going to start shutting churches and it would escalate to the point of them beginning to execute Christian people.” 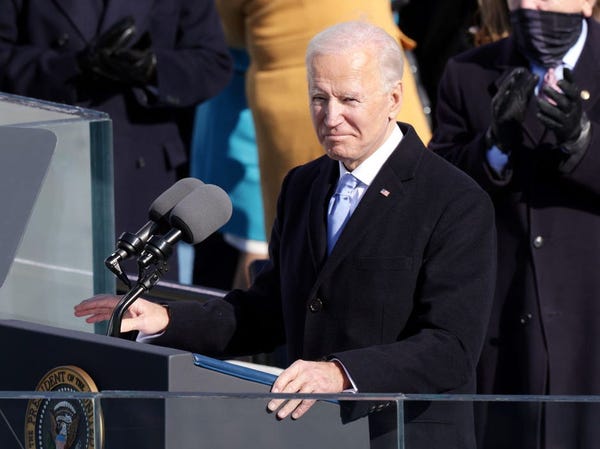 Vanderbilt was inconsolable. She called her mother in tears.

“I was crying, saying that China is going to take over, that we were all going to die, that we were not going to be able to go to church anymore,” she recalled.

She went on Facebook and decided to check-in with her fellow QAnon believers to make sense of Biden’s swearing-in. “I wanted to see what they had to say,” she said.

Many in the Facebook group were still holding out hope for The Storm. Many clung to March 4 — the day that Trump’s most fanatical followers think that the former president will be sworn in.

The belief that Trump will return to power on March 4 is rooted in the “sovereign citizen” movement’s outlandish beliefs.

The conspiracy theory is that a law enacted in 1871 secretly turned the US into a corporation. All presidents before 1871 were inaugurated on March 4. According to the sovereign citizen movement, the next valid inauguration will occur on March 4, 2021, and Trump will become the US’s 19th president.

Vanderbilt, however, is done with these tangled fantasies.

“I just didn’t believe it anymore. It just didn’t make sense to me,” Vanderbilt told Insider. “I didn’t know how a president could be sworn in, it could look so official, and then things could still change.”

Part of her newfound skepticism came from disappointment. “The heartbreak and letdown that I felt from us being wrong, it was like somebody had died or I’d gone through a horrible breakup,” she said.

Having accepted that Trump was out of office, she decided to post a video on TikTok.

“I was wrong,” she told her followers.

When does re education camp start? How much do I need to pack? ##inauguration2021 ##conspiracytok ##trumptok

“That was the moment I truly got out,” Vanderbilt told Insider. “There was something within me, not wanting to feel that devastation of being wrong again, that led to me wanting to find out the truth.”

‘Life on this side is just more hopeful’

After posting the TikTok video, Vanderbilt received over 1,000 comments — the majority of these questions about her previous support of QAnon.

“The questions I was getting made me self-reflect and made me really tear everything apart and realize how insane it all was,” she said. “They really ended up pulling me out of it all.” 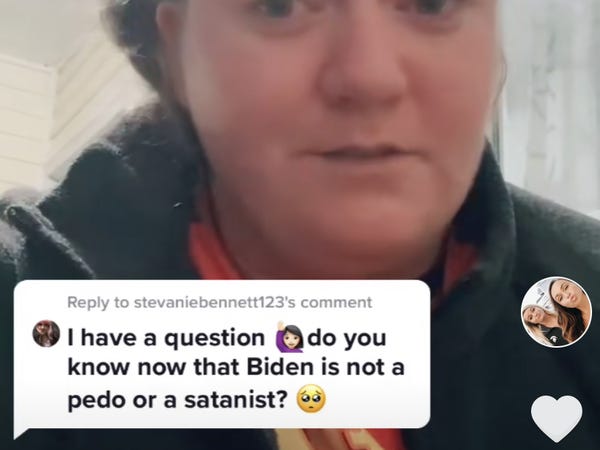 Vanderbilt had subscribed to some of QAnon’s most fantastical of claims. “I believed that there were these satanic cannibalistic pedophiles who ran the world,” she explained to Insider.

An NPR/Ipsos study from December found that in a survey of 1,115 American adults, 17% believed this claim — the central tenet of the QAnon conspiracy theory.

Vanderbilt had also believed that several high-profile celebrities were torturing children and drinking their blood. “I even believed that the group had killed some of them [celebrities] off and it was actually their clones walking around,” she said.

The South Carolina mom said that she worshipped Trump. “I think I had put him on this really unhealthy pedestal,” she told Insider. “I even started to think to myself… had I put God in the backseat?”

Her quest to find the truth after Inauguration Day meant that she was now open to hearing alternate views.

“Being open-minded and learning how to find unbiased information, that has been really helpful,” the former QAnon disciple told Insider.

Now, Vanderbilt has replaced the lurid fantasies of QAnon with a more liberal set of beliefs in just over a month. 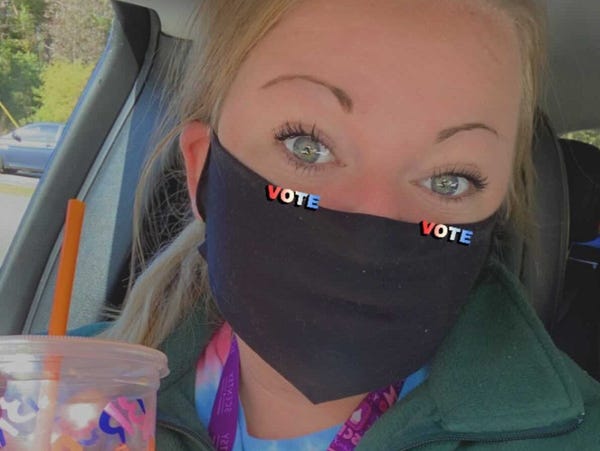 “I think it’s unfortunate that Trump was acquitted,” she told Insider. “I don’t know why they wouldn’t see that he was guilty.”

She also told Insider that she wouldn’t write off campaigning or voting for a Democrat in a future election. “If I knew what the candidate was about and I felt like we were on the same page, then I would campaign for a Democrat,” she told Insider.

Vanderbilt says her political transformation has improved the quality of life. “Life on this side is just more hopeful and it’s not full of disappointment and anger and hatred and fear,” she said.

‘It’s easy to get wrapped up in it all’

Vanderbilt now intends to use her platform to educate others about how easy it is to get caught up in a conspiracy theory.

“It’s easy for anybody to believe it and fall into it and smart people fall for it too,” she told Insider.

The mother-of-one first got caught up in QAnon through TikTok.

She liked a few Trump videos and the algorithm started to recommend similar videos. Interested in what she was seeing, she reached out to Trump followers she knew with questions.

These people began to send YouTube links, added her to Facebook pages, and invited her to Telegram group chats. She now recognizes that these pages were QAnon propaganda.

“I ended up getting really involved in Telegram and Facebook,” Vanderbilt told Insider. She spent hours, every night, watching Facebook live videos of QAnon influencers.

“If you surround yourself with like-mind minded people, all thinking the same thing, it’s easy to get wrapped up in it all,” she told Insider. ” It’s difficult to explain to somebody that doesn’t understand that.”

Videos to do with the trafficking of children are what got her invested. “Trafficking is real and that does happen in the real world,” Vanderbilt explained. “Why wouldn’t I believe something like that?”

“It piqued my interest,” she added. “I wanted to know what was going on and wanted to be able to stay 10 steps ahead of everybody to make sure that my daughter was safe.” 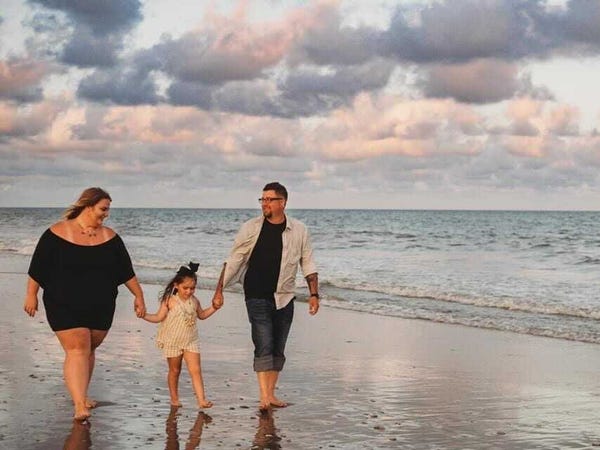 Vanderbilt is now hoping to “create a bridge of understanding” with current QAnon followers. The former QAnon believer wants people to know that there are other options.

“I’d tell current QAnon followers that whenever they’re ready to explore other options and seek out alternative answers that there’s a huge support system and a lot of encouragement to be given,” she added.

“They need to know that it’s OK and it’s actually safe out here,” Vanderbilt said.

She hopes that people who have fallen down the rabbit hole will be treated with “empathy.” “I’ve been where they are and as much as everything seems true,” she told Insider. “It’s not.”