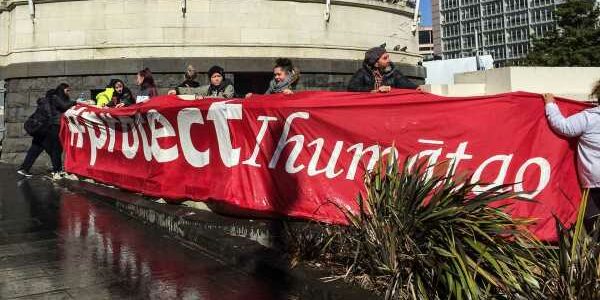 By Jane Patterson, at RNZ

There has been a major breakthrough towards resolving the standoff over Ihumātao, with an initial deal expected to go to Cabinet today.

RNZ understands the deal is for Fletcher Building to sell the land to the government, the first step in reaching a resolution; with agreement from Fletchers and Kīingitanga, on behalf of mana whenua.

While this would remove Fletchers from the equation, more work to then decide how the government and mana whenua reach a final agreement about the land would likely still have to be done.

Attempts by Labour ministers to get a Cabinet-mandated resolution were repeatedly blocked last term by coalition partner New Zealand First, which was voted out of Parliament at the election.

It has been about 18 months since protesters flocked to the disputed land in South Auckland to support occupiers who were delivered an eviction notice, bringing Fletcher Building’s plans to build 480 houses to a halt.

Ihumātao is located next to the Ōtuataua Stonefields Historic Reserve in Māngere – home to New Zealand’s earliest market gardens and a significant archaeological site on land considered wahi tapu, or sacred, by local hapū and iwi.

Local and central government were reluctant to come riding to the rescue but, under pressure, Prime Minister Jacinda Ardern promised no building would take place at Ihumātao while the government and other parties worked to broker a solution.

And there it has remained with various deals, discussions and attempts at resolution appearing then fading away – but the recent election result was the game changer.

New Zealand First, and its leader and former deputy prime minister Winston Peters, vowed throughout to block any taxpayer money being spent on resolving the dispute and warned of the “domino” effect it would have on sparking potential Treaty of Waitangi rows over land elsewhere. His party was in coalition with Labour, and consensus on decisions around the Cabinet had to be reached before any action could be taken.

During the election campaign he delivered a speech from Orewa calling the protesters “malcontents who got so much unjustified publicity, sticking mainly in the throat of traditional Māori”.

Peters said his party had said no to Labour “three times” and refused a request from its coalition partner to invoke the “agree to disagree” clause.

“For us, it was a matter of deep principle. For us, it was fundamental to whether we maintained confidence in Labour. So we told Labour that. And staved off any action before the election.”

He predicted Labour would move to do a deal if elected, which is what RNZ understands is now happening. This is the fourth policy it has moved on since the election, where New Zealand First had been a stumbling block in the previous term.

Even with Fletchers out of the picture it could be a long process before the dispute is fully resolved, but this way Ardern could go to the big events that kick off the 2021 political year – Rātana and Waitangi – with some progress to show.

There was speculation back in June a deal was coming together, under which the land would be acquired under the Housing Act, avoiding any conflicts with Treaty of Waitangi settlements but not necessarily meaning any houses would be built there.

The government would want to come up with an agreement that does not set a precedent for other land that could become subject to challenge. RNZ has previously reported on discussions about setting up a “rōpū whakahaere” – a governing body comprising “both central and local government and mana whenua representatives … to make any decisions about the land”.

It will also have to reach agreement across all mana whenua with differing views about whether any deal should include the green light for housing.

In September last year, the Māori King, Kiingi Tūheitia, announced on behalf of mana whenua they had reached consensus over what to do with Ihumātao, and their position was they wanted it back.