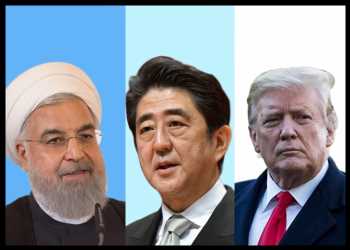 Japanese Prime Minister Shinzo Abe began a two-day visit to Iran with the mission of finding ways to ease tensions between the United States and Iran.

Abe’s visit to Iran, the first Japanese leader to do so since 1978, comes on the 90th anniversary of the diplomatic relationship between the two Asian countries.

Abe is scheduled to hold talks with Iranian President Hassan Rouhani Wednesday, and is expected to meet the Islamic country’s Supreme Leader Ayatollah Ali Khamenei the next day.

Political observers are not sure how effective will be Abe’s efforts to persuade Tehran to follow a path of denuclearization, an issue that is at the helm of dispute with Washington.

Speaking to media at Tokyo’s Haneda airport, Abe said he would like to have a frank exchange of views with the Iranian leaders to ease tensions in the Middle East.

On the eve of his departure, Abe exchanged views on Iran with US President Donald Trump over phone, the Prime Minister’s spokesperson told reporters. Trump was on a state visit to Japan in late May.

US-Iran ties have worsened under the Trump administration, which withdrew from the 2015 international nuclear deal over Iran’s nuclear program, and re-instated sanctions that were eased by Trump’s predecessor in return for Teheran’s initiatives to curtail uranium enrichment.

Iran said it was suspending some of its commitments under the deal.

Trump also lifted exemption given to countries like Japan and India from buying oil from Iran.

Any conflict in the Middle East has the potential to drive up oil prices that would naturally affect Japan.

Trump followed it up by imposing tough sanctions on Iran’s metals industry to increase financial pressure on the country for which metal export is the second biggest source of income after oil.

The White House said the Trump Administration will continue to apply maximum pressure on the Iranian regime until its leaders change their destructive behavior and return to the negotiating table.

US reimposing all Iran sanctions lifted under nuclear deal