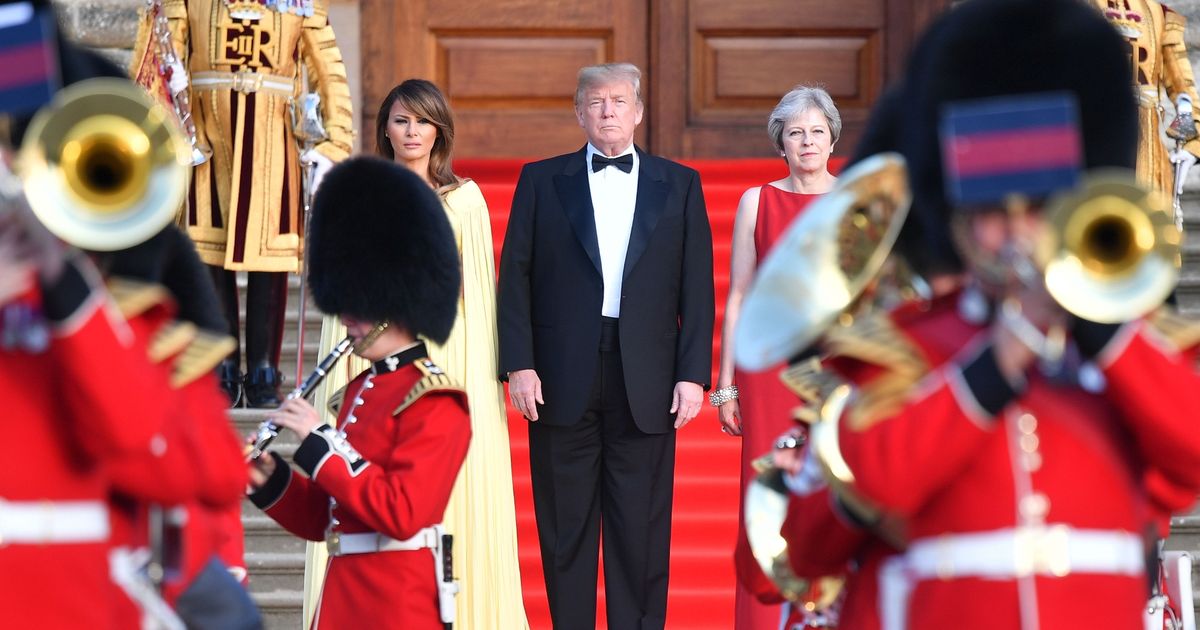 If Donald Trump’s arrival at Blenheim Palace tonight was the opening act of a scaled back, modest ‘working visit’ – I have to ask, how do you top that?

What level of filthy, dripping opulence can Theresa May possibly have planned for the full scale state visit he’s been promised?

Presumably he’ll be whisked down the Mall atop a 24 carat gold leaf flying carpet, flanked by the entire Order of the Companion of Honour wearing full suits of armour.

When he arrives at Buckingham Palace, the two surviving Beatles will be there to perform the Let It Be album in its entirety for the enjoyment of the First Family.

They will then take tea in the Palace with a clone of Churchill himself, which the Cabinet Office have had growing in an underground lab for the past 50 years specifically for this moment.

What I’m getting at is that today’s event could not be described by any honest and reasonable person as ‘scaled back.’

The Prime Minister welcomed the President of the United States to Great Britain in the dramatic surroundings of Blenheim Palace, the Duke of Marlborough’s sprawling estate.

The British government literally rolled out the red carpet for the former reality star and casino mogul, who remains under federal investigation for obstruction of justice, and whose companies have declared bankruptcy six times.

The Blenheim Estate is very much the Goldilocks of private palaces. Just small enough to feel cosy, just large enough that the noise of hundreds of remarkably angry protesters outside won’t drown out the band.

As we approached the gates on the Press Bus, we were greeted with boos, jeers and chants of “shame on you” – and some quite witty signage. Highlights included “S**tler Go Home” and “Danny Dyer for President”.

But the President won’t have seen any of that, because he turned up in not one, but two helicopters.

Waiting in the courtyard were musicians from the Coldstream Guards, the Scots, Irish and Welsh guards, the royal herald trumpeters and bagpipers from the Royal Scottish Regiment, which is a better line-up than you’ll see most years at Glastonbury.

And watching from the side of the steps were a hundred or so business leaders, politicians and invited dignitaries, all dressed up to the nines in full black tie and shimmering dresses.

The Prime Minister and her husband, Phil, made the long walk down the steps and across the courtyard to greet the President and his first Lady in their motorcade.

Six minutes is a long time when you’re in a posh frock in the middle of a massive courtyard waiting for either a man who has sexually assaulted women, or lied about having done so to impress his friends, and yet somehow gets to refer to himself as the leader of the free world.

And when the doddery old man eventually turned up, he still needed a hand up the stairs.

The band – who were impeccable and at times quite moving – ended their performance with a hymn I know quite well from my youth, Dear Lord and Father of Mankind.

The last line of the hymn is “Oh still, small voice of calm”.

That’s not something you’re ever going to get out of Donald Trump.