Who will benefit the most from a Biden administration’s policies?

Los Angeles Mayor Eric Garcetti has avoided answering whether he’d leave his current position if a cabinet position was offered to him in President-elect Joe Biden's administration, but speculation has continued to mount, according to reports.

“It’s risky,” Steven P. Erie, a professor of political science at the University of California at San Diego, told the Los Angeles Times while reflecting on unfinished problems in L.A. such as homelessness, a budget crisis and the coronavirus. “It’ll look like he’s abandoning ship. But people do have short memories. People tend to forget, especially if he goes on to bigger and better things. People will blame his successor.”

Garcetti, a longtime friend of Biden and the national co-chairman for his campaign, said Monday he was focused on the pandemic and a federal relief bill.

“We've got two and a half months … of an existing administration,'' Garcetti told KPCC radio's "Air Talk'' program, according to KABC-TV. "And our city and cities across this country need a relief bill that, I'm hopeful, that maybe is one of the last things we can see [President] Donald Trump do, or certainly get ready to do it as soon as President Biden is there.” 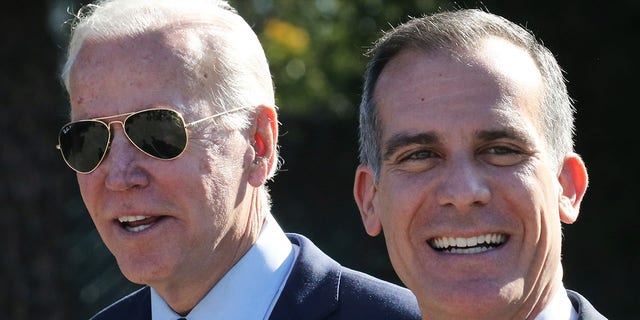 Still, he added, “When Joe calls I never refuse that phone call. I always answer the phone, but I'm really just savoring this moment.”

Garcetti has two years left in his term in a city that is struggling: Coronavirus cases are rising and the economic setbacks of the crisis are putting more residents on the precipice of homelessness. Homicides are also up and the city may have to lay off employees due to revenue shortfalls, the Times reported.

The mayor is also in the midst of a sexual harassment scandal in his office. Top aide Rick Jacobs has been accused of inappropriate behavior by multiple men, including a police officer who used to work security for Garcetti. Garcetti has denied knowledge of any wrongdoing.

Most of the reporting around a possible Biden cabinet position is over the transportation secretary position, according to KABC, which may be Garcetti’s best option for higher office at the moment.

Garcetti isn’t a close ally of California Gov. Gavin Newsom and is unlikely to be appointed to the U.S. Senate seat being vacated by Vice President-elect Kamala Harris.

“He would be foolish not to go to D.C.,” Jaime Regalado, professor of political science at Cal State L.A. told the Times.