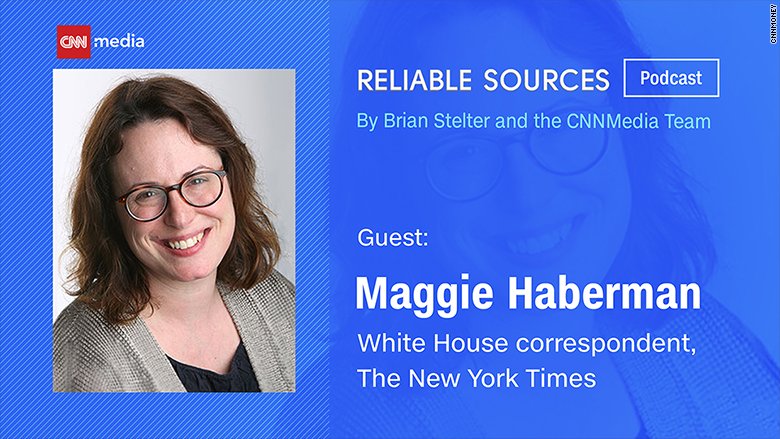 Maggie Haberman on Trump, 18 months in 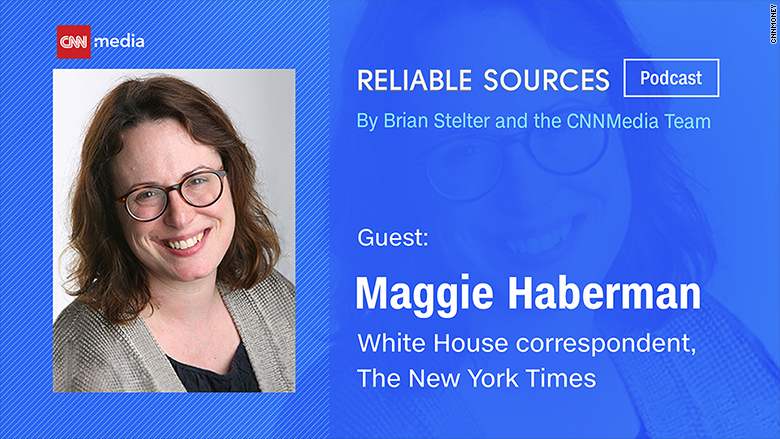 It’s been 18 months to the day of Donald Trump’s inauguration — and the pace of change has been relentless. White House correspondents are exhausted. But Maggie Haberman’s role has remained constant. She just keeps serving up scoops.

“I try to just really burrow into the just-the-facts piece… because everybody has a lot of emotions about what’s happening right now [and it] can become difficult because people are very emphatic about everything that is taking place,” Haberman told CNN’s Brian Stelter on this week’s Reliable Sources podcast. “It is at the end of the day… a story… And we go and we cover a story the way we would cover anything else.”

A White House correspondent who joined the New York Times in 2015, Haberman has been covering Trump extensively since 2011 and was part of a team that won the Pulitzer Prize in 2018. She discussed what’s changed — and what hasn’t — in the past year and a half of the Trump presidency.

Listen to the whole podcast here:

Just before sitting down with Stelter on Friday, Haberman and her colleagues broke the news that Michael Cohen secretly taped Trump discussing payment to a former Playboy model who said she had an affair with Trump.

“This story I think is a significant story, but I think that we have seen several significant stories throughout the course of the Trump administration and the Mueller investigation and then the SDNY investigation into Michael Cohen,” Haberman said, referring to the Southern District of New York, which oversaw the raids of Cohen’s office in April.

“We are all doing our best to, I think, focus on what we think is significant, as opposed to just sort of keeping tabs on minutia and incremental developments, because you could go crazy that way,” Haberman said.

Trump kicked off the week by privately meeting with Vladimir Putin in Helsinki, and then later inviting Putin to a meeting in the US. Appearing on CNN’s “New Day” Friday morning, Haberman labeled it “the worst week of his presidency.”

Speaking to Stelter, she applauded the press for its coverage of Helsinki. But, she thinks the media as a whole paints a lot of news with the same brush.

“I think that proportion has not been our strong suit in the media,” she said. “Everything with him is new and different, for the most part… And then you have the accelerated speed of the news cycle of this era. And I think it is disorienting for all of us in a lot of ways. I think that when something truly major happens, like the president’s meeting in Helsinki, and then the four days of fallout from it, it can be harder for people to judge the scope. And I think that that’s unfortunate.”

At the outset of Trump’s presidency, White House insiders talked to reporters to do “a gut check or a reality check or to vent or so forth,” Haberman said. “That was particularly true early on in the administration for the first six months when the president was surrounded by a lot of people who hadn’t known him for a very long time.”

Since then, the administration has had a high rate of turnover. But Haberman doesn’t see the nature of relationships changing.

“I think the cast of characters has changed, but I think that working dynamics around Donald Trump are always going to be the same thing,” she said. “There’s always teams fighting against each other.”

Trump has also continued to target the press since taking office. One of his go-to phrases has been “fake news,” but he’s now increasingly turning to “enemy of the state.”

Haberman thinks there’s a reason for this — “He usually tries on a new label when he feels like another one didn’t work.”

Press briefings have continued for White House reporters, too, although, as Stelter mentioned, “they’re happening even less often than they used to.” He counted four briefings in the past 30 days.

“I would rather be able to ask an official a question,” she said. “I don’t understand the people who tell us the press should go stand up and turn our backs or walk out en masse.”

Instead, what she’d like to see is journalists working more with each other. At Wednesday’s briefing, the Hill’s Jordan Fabian tossed his question back to NBC’s Hallie Jackson when Sanders tried to avoid answering her.

The one thing that has changed in the Trump White House, Haberman has determined, is Trump’s approach to his job.

“Last year, in 2017… he was aware of being in over his head, I think,” she said. “And every president, to be fair, comes in feeling that way… Now, sometime around the turn of the New Year, you could feel, really, him feeling more empowered, more emboldened, more understanding of what the job was. Sort of some level of, ‘I’ve got this now.’ And that is what has changed. And that’s not small.”