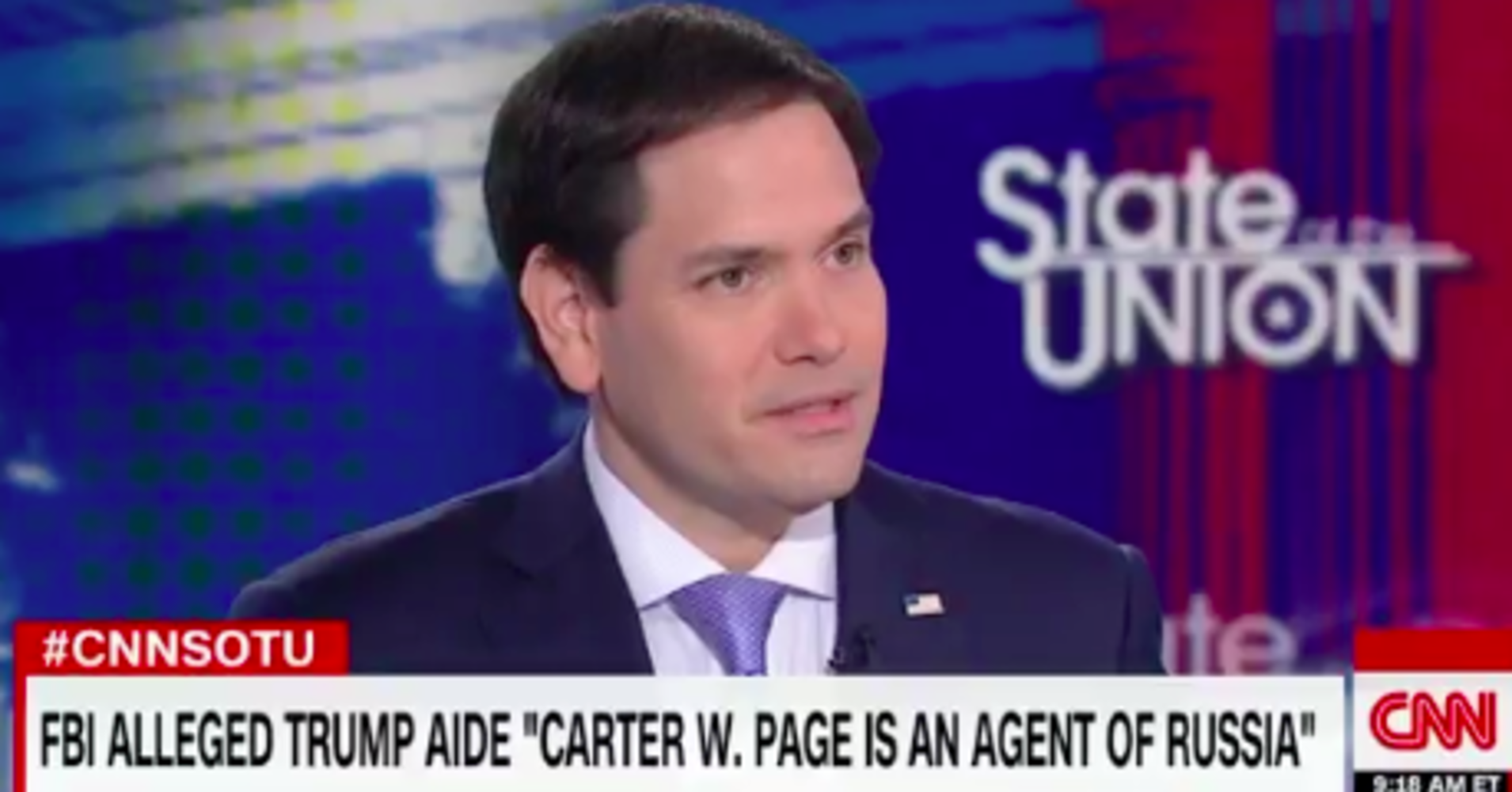 Marco Rubio Breaks With Trump: FBI ‘Did Not Spy’ On President’s Campaign

Sen. Marco Rubio (R-Fla.) said on Sunday he doesn’t believe the FBI “spied” on President Donald Trump’s 2016 campaign, as Trump and his allies have repeatedly claimed.

Rubio disputed Trump’s characterization during an interview with CNN’s Jake Tapper, saying that FBI investigators were justified in their October 2016 wiretapping of Carter Page, a former Trump campaign adviser. The agents, it has been learned, had reason to believe Russia had sought to recruit Page as part of the scheme to subvert the presidential election.

“I don’t think they did anything wrong,” Rubio said of the FBI efforts. “I think they went to the court. They got the judges to approve it. They laid out all the information ― and there was a lot of reasons… for why they wanted to look at Carter Page.”

The Justice Department released a trove of documents on Saturday that included the FBI’s Foreign Intelligence Surveillance Act warrant applications to surveil Page.

“The FBI believes Page has been the subject of targeted recruitment by the Russian government… to undermine and influence the outcome of the 2016 U.S. presidential election in violation of U.S. criminal law,” according to the documents.

Page has repeatedly denied being a Russian agent. Appearing on Tapper’s “State of the Union” program before Rubio, he said he had once served as an “informal” adviser to the Kremlin, but that it was “totally unreasonable” to say he may have been unwittingly working with Russians during the ’16 campaign.

In a series of tweets Sunday, Trump claimed the previously classified documents showed the FBI “misled the courts” and that his campaign “was illegally being spied upon.”

But Rubio, who sits on the Senate Intelligence Committee, steadfastly disagreed with Trump on the FBI’s FISA warrants and surveillance of Page.

“I have a different view on this issue than the president and the White House,” he said on CBS’ “Face The Nation,” also on Sunday. “They did not spy on the campaign from anything and everything that I have seen. You have an individual here [Page] who has openly bragged about his ties to Russia and Russians.”

“Yes, they were looking into this one individual ― but an individual the campaign themselves said was not a big part of their efforts,” he continued. “Therefore I wouldn’t consider that spying on a campaign.”

Rubio was among the many Republicans that Trump defeated in the race for the party’s presidential nomination two years ago.