Home » Politics » NATO, the Queen, Putin and some golf — Trump has a busy week coming up 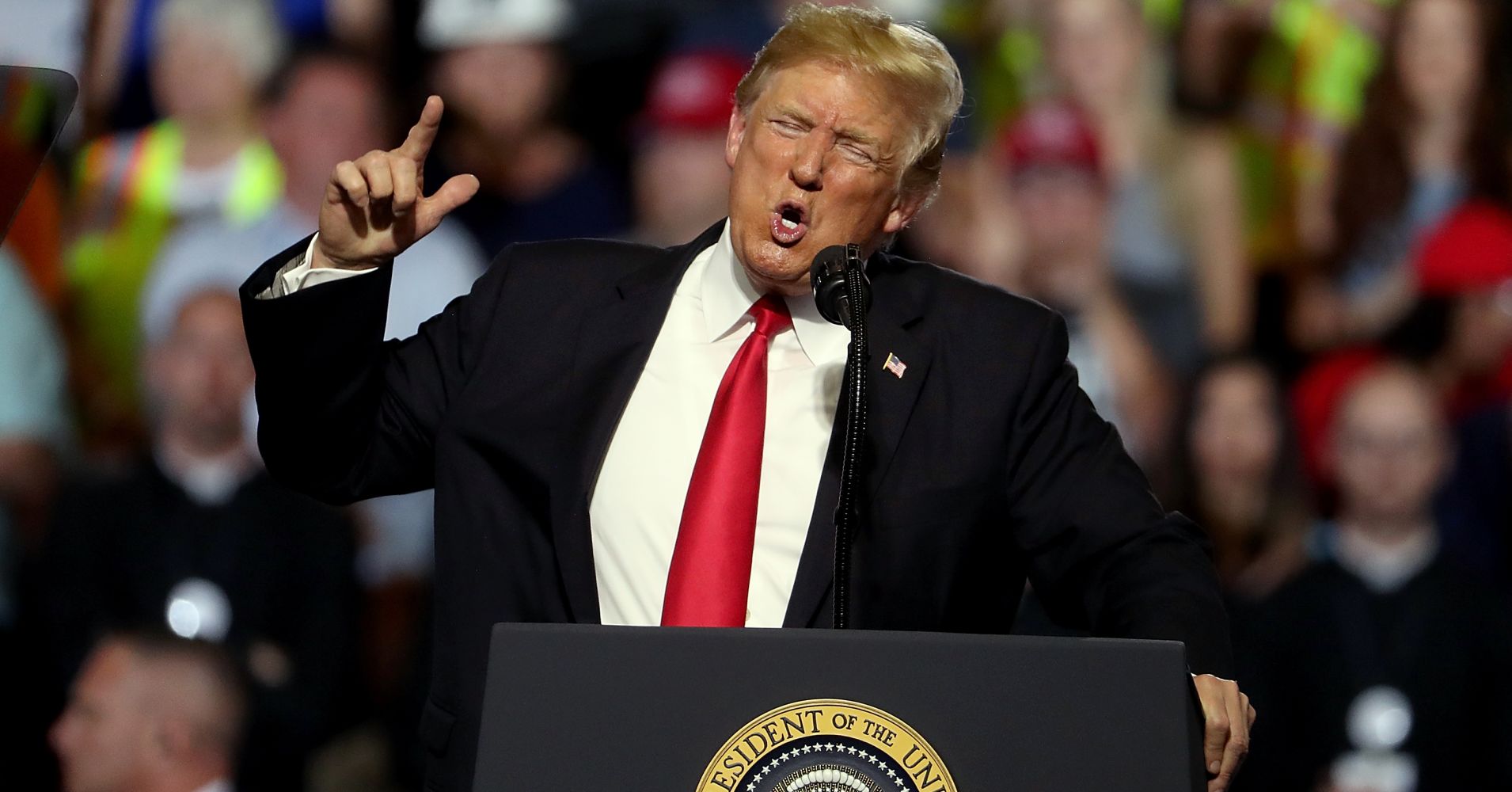 NATO, the Queen, Putin and some golf — Trump has a busy week coming up

President Donald Trump will travel to Europe this week for a series of meetings that will see him wine and dine — and discuss the world’s most pressing issues — with heads of state, government and business.

Trump will face fellow leaders on Wednesday and Thursday at the NATO summit in Brussels, where defense spending is expected to b—e a thorny subject of discussion.

He will then travel to England, where he will meet Prime Minister Theresa May, Queen Elizabeth II and business leaders, before heading to Scotland on Friday evening, where he’s expected to play some golf over the weekend.

On Sunday evening, Trump will fly further north to Helsinki, Finland for a one-on-one meeting with Russian President Vladimir Putin.

Given the backdrop of international trade tensions following Trump’s tariff increases; the litany of retaliatory measures announced by U.S. allies including the European Union (EU); Trump’s criticism of NATO; and close scrutiny of his administration’s links to Russia — some of these encounters are bound to be less congenial than others.

It’s likely that Trump will have few friends at the NATO summit in Brussels as he has repeatedly blasted the alliance’s members for not meeting a 2014 pledge to spend 2 percent of their gross domestic product (GDP) on defense.

Claiming that other countries are not pulling their weight, although the contributions are only voluntary, Trump has previously warned that the U.S. would not to be willing to intervene on the behalf of nations that did not reach the 2 percent spending target.

Germany is a real target for Trump’s wrath, especially given its low defense spending and high trade surplus. And there are fears he could pull troops out of Europe — specifically, from Ukraine — should its leaders refuse to put in more money.

NATO Secretary General Jens Stoltenberg conceded that there were “some real disagreements” between the U.S. and other NATO members over trade, climate change and the Iranian nuclear deal. He told CNBC last week that NATO had previously been successful in overcoming those disagreements. “I am confident we will do so again this time,” he said.

One of the biggest concerns is that Trump’s meeting with Putin after the NATO summit could see the U.S. and Russia become closer, leaving Europe more vulnerable to its resurgent neighbor, which annexed Crimea from Ukraine in 2014 and remains unrepentant despite international sanctions.

Fred Kempe, chief executive and president of think tank Atlantic Council, wrote in a note Sunday that “there is the very real but previously unthinkable prospect of a U.S. president snarling at his NATO allies before smiling at his Russian counterpart a few days later.”

“The defenders of NATO and transatlantic relations make a mistake when they dismiss President Trump’s complaints,” Kempe said. “Yet President Trump also errs if he comes to Brussels this week with a wrecking ball rather than a reformer’s passion,” he added.

NATO’s 2017 report noted that “European allies and Canada increased spending on defense by almost 5 percent — meaning­ there have now been three consecutive years of growth since 2014.” Still, the report showed that in 2017 only five NATO members had met the 2 percent target – the U.S., U.K., Greece, Poland and Estonia.

Trump will leave Brussels directly for the U.K. on Thursday afternoon for a three-day “working visit” likely to be marked by planned mass protests against the president.

Trump will attend a black-tie dinner at Blenheim Palace in Oxfordshire, the ancestral home of wartime leader Winston Churchill, on Thursday evening. The dinner will be hosted by Theresa May and will be attended by around 150 business leaders, including Blackrock’s Larry Fink and Johnson & Johnson’s Alex Gorsky.

Trump and first lady Melania will spend the night at Winfield House, the official residence of the U.S. ambassador to the U.K., and on Friday morning will visit a U.S. defense site to view joint U.S.-U.K. military exercises.

They will then travel to the prime minister’s country residence, Chequers, for a working lunch before heading to Windsor Castle for the likely highlight of the visit for Trump – meeting Queen Elizabeth II. Trump said in an interview with Piers Morgan earlier this year in Davos that his late mother, a Scot, loved the Queen and the royal family. Whether the feeling is mutual is not so clear.

Adding to the long list of people who Trump has offended, the president does not have a great history when it comes to the royals. He has made crude comments in the past about the late Diana, Princess of Wales and has also criticized her son Prince William’s wife, the Duchess of Cambridge, defending invasive paparazzi photos taken of her in 2012 while she was sunbathing topless.

Trump’s visit to the U.K. was initially going to be the full shebang of a state visit, but this was scaled back after threats of widespread protests against a leader many in Britain view as misogynistic and xenophobic, given his previous comments regarding women and immigrants.

A petition in 2017 that protested against Trump’s visit being a state visit said his “well-documented misogyny and vulgarity disqualifies him from being received by Her Majesty the Queen or the Prince of Wales.” The petition attracted more than 1.8 million signatures.

Despite the visit becoming a “working visit,” mass protests are planned around the country. The itinerary appears to be designed to keep Trump as far away as possible from London, where 50,000 could demonstrate at a “Stop Trump” rally on Friday.

Permission has been granted by London Mayor Sadiq Khan, not one of Trump’s biggest fans, to allow a 20-foot-tall balloon depicting Trump as a baby to be flown over the capital during the visit. The campaigners who paid for the balloon have said it represents Trump’s character as an “angry baby with a fragile ego and tiny hands,” but it has drawn criticism for being disrespectful.

Sam Lowe, a senior research fellow at the Centre for European Reform, told CNBC’s “Street Signs” on Monday that the “special relationship” between the U.K. and U.S. is “quite fraught at the moment.”

“President Trump isn’t particularly popular in the U.K. Last week, there was a bit of a kerfuffle over the fact that someone is going to fly an air balloon with an effigy of Trump in a nappy and that’s been allowed in London. I don’t think he takes very well to personal insults, so he will notice it,” Lowe said. “So there’s problems there on the transatlantic side.”

After meeting the Queen in Windsor, Trump is expected to travel to Scotland to play golf at one of his two golf courses in the country over the weekend.

The costs of policing Trump’s visit are estimated to come to around £5 million ($6.6 million), and when the Scottish government balked at contributing towards this, the government in London stepped in, promising to foot the bill.

Trump is also expected to use his stay in Scotland to prepare for his bilateral summit with Vladimir Putin on Monday, July 16.

The meeting will be watched closely by the rest of the world, not least because of the apparent “frenemy”-type relationship between the two men, but also following allegations that Russia meddled in the 2016 U.S. election to Trump’s benefit.

Both Moscow and Washington have denied any wrongdoing, although Special Counsel Robert Mueller’s probe into election interference continues.

The summit has been seen by analysts as a largely symbolic engagement where the “likely outcome is a statement that lays the groundwork for resolving critical issues in bilateral relations and committing to work towards resolving high-profile foreign policy challenges, such as Syria and Ukraine,” according to Otilia Dhand, Teneo Intelligence’s senior vice president.

It’s expected that Putin will try to use the meeting to persuade Trump to relax U.S. sanctions on Russia that were imposed after its 2014 annexation of Crimea and its role in a pro-Russian uprising in east Ukraine. Dhand said it was unlikely to be easy to relax sanctions, however.

“Regardless of the outcomes of the summit, U.S. sanctions against Russia are unlikely to be eased soon, mainly because most sanctions impacting the Russian economy are now codified in law and can only be changed by the congress,” Dhand said in a recent note. “However, the planned meeting will likely dissuade the administration from imposing any further measures on Russia, both in the run-up to the event and shortly after it.”