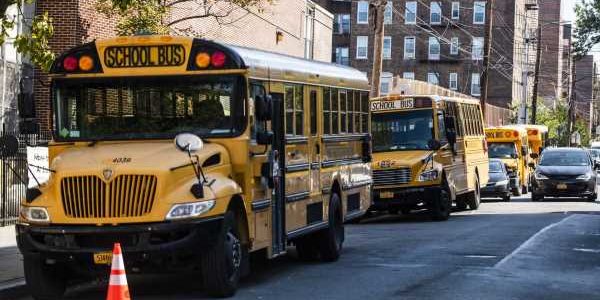 NYC Schools May Shut Out of Caution, Health Adviser Says

We’re tracking the latest on the coronavirus outbreak and the global response.Sign up here for our daily newsletter on what you need to know.

New York City’s school buildings will close out of caution if the citywide Covid-19 infection rate hits 3%, even though the virus has been absent from almost every classroom, Mayor Bill de Blasio’s top health adviser said in an interview Friday.

City officials lack enough information to safely modify rules established in August that set the 3% threshold, said Jay Varma, special adviser to the mayor. As the virus spreads through the city, officials don’t know whether schools could remain safe havens from the illness, he said.

“As there is more community transmission, there are more infections in people associated with schools — students, teachers, other employees,” Varma said. “It doesn’t mean that the school itself is the place where they got infected. But because of the rigor of our protocol, it obligates us to close classrooms and buildings.”

Varma spoke on the same day that de Blasio advised parents to prepare to keep their children home from school as soon as Monday. The city’s seven-day rolling average of positive test results has hit 2.83%, up from less than 2% at the beginning of the month.

“People should get ready,” the mayor said during aWNYC radio interview Friday. “Parents should have a plan for the rest of the month of November.”

Schools across the U.S. have been open for weeks, and so far relatively few appear to have spread Covid-19 among students or into wider communities. So far, the schools’ experience suggests that children are not major spreaders of Covid-19 among each other, their families and others, as had been initially feared. Instead, they are more likely accurate reflections of conditions in the broader community.

“You can’t really pull the school out from the community,” said Walter Gilliam, an education policy researcher at the Yale School of Medicine.

The infection rate within New York City schools remains less than 0.2% after more than 100,000 random tests of students and teachers. Listeners calling in to the WNYC broadcast cited the schools’ safety record in questioning the mayor’s decision to insist on the 3% citywide closure standard.

Closing the schools would force the city to indefinitely abandon its system of offering students either a combination of in-class and remote instruction or full-time at-home online lessons. About 300,000 of the city’s 1.1 million students chose the blended system, but attendance has been spotty. Parents have until Sunday to make a final choice, a decision increasingly fraught as infection rates rise.

United Federation of Teachers President Michael Mulgrew has defended the 3% standard. Although the schools are safe now, he said, “the virus will infiltrate the schools and then, instead of an outbreak in one or two neighborhoods, the schools will be the connection point to all the city’s neighborhoods.”

Yet de Blasio’s decision to close the schools automatically if the infection rate hits 3% brought questions from New York Governor Andrew Cuomo, who has ultimate authority over whether the schools may close.

“The problem isn’t coming from the schools,” the governor said during a Friday news briefing. “It’s coming from the bars, the restaurants, the gyms, and the living room family spread.”

Varma said the public-health calculation was more complicated than that. Protocols established in August before the schools opened required classrooms be closed when a student or teacher is found to be infected, and whole school buildings could be shut upon evidence of more widespread infection.

The 3% standard is part of the schools’ multiple lines of defense including masks, physical distancing and hygiene. Officials don’t have enough information to know which rule could be scrapped or modified without risking a crisis, Varma said.

“Our standard of evidence has to be higher than a guess,” he said. “We can’t say for sure that if we remove one part of this protocol that we can absolutely guarantee everything as safe.”

— With assistance by Keshia Clukey, and Kristen V Brown