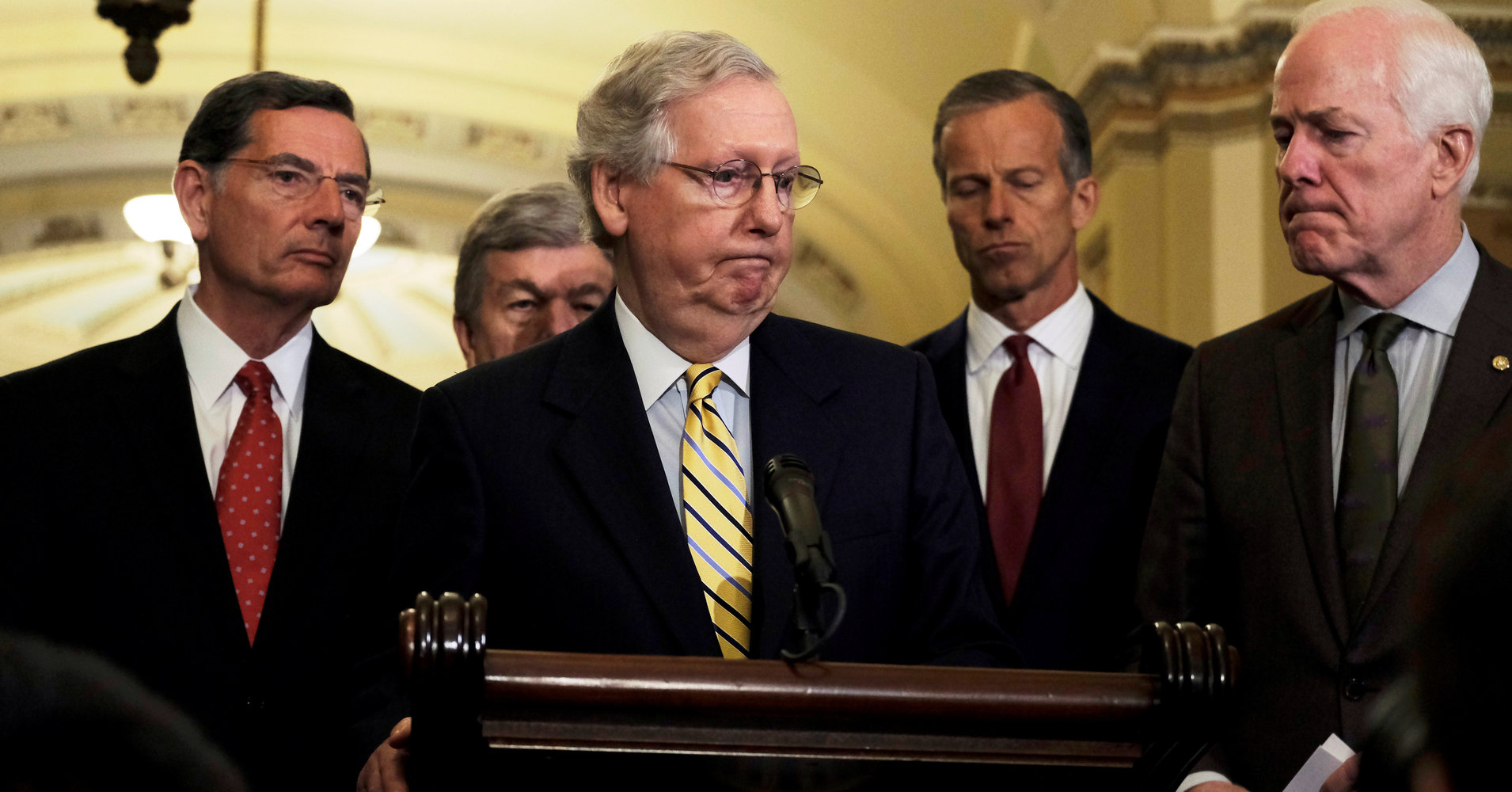 Republicans Are Having A Hard Time Rationalizing Trump’s Helsinki Performance

President Donald Trump’s performance in Helsinki on Monday has evoked some of the strongest, most negative reactions of his presidency. All but the most sycophantic Trump supporters are distancing themselves from his refusal to condemn Russia’s plot to manipulate the 2016 U.S. election and his equivocation over whether Russian President Vladimir Putin was responsible for it.

Republican Party leaders have mostly criticized Trump by implication ― expressing their own personal support for the intelligence establishment and their belief in its conclusion that the Russian state is behind the cyberattack. But some have taken on Trump more directly, saying they were “troubled” or “dismayed” by the president’s “blindness to Putin’s hostile acts.”

That doesn’t mean the outrage will last, however. GOP anger with Trump has been known to dissipate quickly, with supporters picking up a set of excuses for why the president’s behavior wasn’t as outrageous or reprehensible as it seemed at first blush. And it may be happening again.

In conservative media and Republican caucus rooms on Capitol Hill, a counter-narrative about Trump’s behavior toward Russian election meddling is starting to take shape. It includes at least three separate rationalizations for Trump’s statements in Helsinki ― and for why, more generally, the president has been trying to undermine special counsel Robert Mueller’s investigation into Russian electoral interference.

Some of the arguments may sound familiar because they started with Trump himself and have been making the rounds on Twitter for a while. And like so many of the president’s statements, they do not hold up well to scrutiny.

One supposedly exculpatory argument is that President Barack Obama is the one responsible for Russian electoral interference in 2016. Trump and his allies have been making this case for a while. But they began making it more vigorously in the last few days, following the release of Mueller’s indictment naming 12 Russian intelligence agents and providing new details about the plot to change the election’s outcome.

“The stories you heard about the 12 Russians yesterday took place during the Obama Administration, not the Trump Administration,” Trump wrote in a tweet. “Why didn’t they do something about it, especially when it was reported that President Obama was informed by the FBI in September, before the Election?”

Actually, the Obama administration did react to the Russian attack, mainly through a series of public warnings and private threats that Obama officials conveyed to their Russian counterparts.

In September, the Obama administration tried to organize a bipartisan statement from congressional leaders, figuring that would assure people the president wasn’t simply trying to affect the election outcome. Senate Majority Leader Mitch McConnell (R-Ky.) refused to go along, as Obama officials later said and The Washington Post subsequently confirmed.

The Obama administration could plausibly have done more, and today, some of its former members wish it had. But it’s not at all clear why their success, or lack thereof, would get Trump off the hook for his recent behavior. The president’s duties include investigating and protecting against foreign threats. They are not supposed to depend on what his predecessor did or didn’t accomplish.

“It didn’t affect the election outcome.”

A second but related argument is that the Russian attacks “didn’t have a material effect on our elections,” as House Speaker Paul Ryan (R-Wis.) suggested on Tuesday. This, too, is a Trump favorite. He makes similar claims pretty much every time the subject comes up.

The confidence with which Republicans wave away the plot’s impact is a bit mystifying, given what actually transpired in 2016. The troves of emails that Russian hackers stole from the Democratic National Committee and Clinton campaign chairman John Podesta generated enormous media coverage, in no small part because Trump kept talking about them. He brought them up 164 times in the final month of the campaign, according to a tally by the liberal group ThinkProgress.

Discussion of the stolen emails reinforced two narratives that were highly damaging to Democratic nominee Hillary Clinton’s candidacy ― that she had worked with Democratic Party insiders to undermine the primary campaign of rival Sen. Bernie Sanders (I-Vt.) and that her mishandling of electronic communications was indicative of excessive secrecy and possible corruption.

The DNC emails, which WikiLeaks released on the week of the party’s national convention, likely depressed enthusiasm among Clinton’s more progressive supporters. The Podesta emails, which came out in the waning weeks of the campaign, could have alienated marginal Clinton supporters who harbored doubts about her trustworthiness.

And that’s to say nothing of how other Russian meddling might have influenced voters. One of the truly new revelations in Mueller’s indictment was a finding that Russian hackers had gotten their hands on confidential analytical information from the Democratic Party.

There is no way to know if the 2016 cyberattack swayed just enough voters, in just enough states, to change the election’s outcome. But there is no question that the Russians tried to make that happen.

That would seem to be enough to dictate how the president reacts. An attack on American military forces would call for investigation, condemnation and some kind of retaliation, even if the attack were unsuccessful. There’s no obvious reason why an attack on American democracy ought to be any different.

A third GOP response is that Trump’s behavior is indicative of ego and paranoia, not of crime or a cover-up. This argument holds that Trump is so highly sensitive to charges he didn’t win the election fair and square that he’s lashing out at anybody and anything associated with the Russia probe.

“The president clearly believes if he gives an inch on the what-Russia-did part — if he concedes that Russia made an effort to disrupt the election — his adversaries, who want to discredit his election, undermine him, and force him from office, will take a mile on the get-Trump part,” conservative journalist Byron York of the Washington Examiner explained on Tuesday.

Giving Trump the benefit of the doubt on collusion is pretty difficult at this point, given the multiple, well-documented contacts between Russian agents and Trump insiders ― not to mention Trump’s public call for Russians to find and publish Clinton’s missing emails, which Mueller’s indictment says occurred on or about the same day Russians launched new attacks on her accounts.

That said, this theory about Trump’s ego would certainly explain a few things, like why he answers almost every question about the Russia probe with boasts (in some cases, false ones) about his victory over Clinton.

But it is one thing to explain Trump’s behavior, quite another to justify it. Even in the event that Mueller’s probe clears Trump and his associates of more wrongdoing ― and even if it turns out Trump’s behavior really is all about his frail self-esteem ― it wouldn’t change the fact that he has refused to denounce an attack on American democracy, undermined an inquiry into that attack and likely rendered the country more vulnerable to new ones.

As Trump might put it, a lot of people are saying that’s dereliction of duty. And some of them are saying it’s something worse.