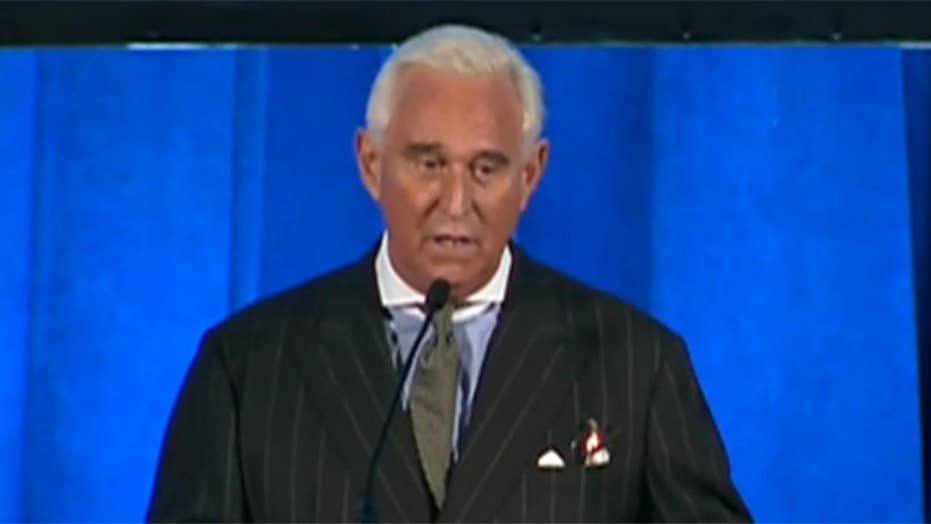 Roger Stone: Mueller has examined every aspect of my life

Trump confidant Roger Stone came out swinging in the president's defense on Thursday at the American Priority Conference in Washington, D.C.

Stone, who was an informal Trump 2016 campaign adviser, reiterated that he would assert his Fifth Amendment right not to testify or provide documents to the “witch hunts” of the Senate intelligence and judiciary committees.

He said he would only testify if it was in public “in front of the American people,” which he said was denied to him in September 2017, when Stone testified in a closed-door setting with the House Intelligence Committee for roughly three hours.

“Despite the partisan claims of (Democratic California) Congressman Adam Schiff, a huckster and con man of the first magnitude … my submitted statement and testimony to the House Intelligence Committee was and is entirely accurate,” Stone said, noting that the last two years have been a hell in which everything from his sex life to his cleaning lady has been investigated.

The Fifth Amendment protects individuals from being compelled by the government to testify or produce testimonial documents that might incriminate them.

Stone’s legal team made the announcement in a letter Tuesday. “Mr. Stone’s invocation of his Fifth Amendment privilege must be understood by all to be the assertion of a Constitutional right by an innocent citizen who denounces secrecy,” Stone’s attorney, Grant Smith, said in the statement.

Stone’s possible ties to WikiLeaks while he communicated with Trump’s campaign have come under scrutiny in Special Counsel Robert Mueller’s probe into possible collusion between the Trump presidential campaign and Russia in the 2016 elections.

Stone insisted Sunday it was “absolutely correct” that he had never spoken with Assange, contacted WikiLeaks in any way, or communicated with Trump about WikiLeaks-related matters.

Stone has insisted a 2016 tweet of his that appeared to presage the release by WikiLeaks of John Podesta’s emails — “Trust me, it will soon the Podesta’s time in the barrel” — was instead a reference to the foreign connections of John Podesta, who ran Hillary Clinton’s 2016 presidential campaign, and his brother, Washington insider Tony Podesta, getting them into the hot seat.

On July 25, 2016, likewise, just three days after WikiLeaks released thousands of stolen emails from the Democratic National Committee, Stone says he received an email alerting him that WikiLeaks would release a similar email dump concerning Clinton and the Clinton Foundation.

In remarks not long after, on Aug. 6, Stone told an audience in Florida that “I actually have communicated with Assange. I believe the next tranche of his documents pertain to the Clinton Foundation, but there’s no telling what the October surprise may be.” He later claimed to be embellishing.

Trump, for his part, has praised Stone for declaring that he would ”never testify” against the president.

“This statement was recently made by Roger Stone, essentially stating that he will not be forced by a rogue and out of control prosecutor to make up lies and stories,” Trump tweeted on Monday. ”Nice to know that some people still have ‘guts!’”

Stone ended his speech Thursday afternoon with a vigorous defense of Trump, saying could go down as one of the greatest presidents and could get re-elected in two years for turbocharging the American economy.

He didn’t become president to be someone, but rather to do something, Stone said; lambasting previous Democrats in the Oval Office, the Clintons and the Obamas, who he claimed were intent on using the office to get rich; Trump already is wealthy, he said.

Stone said: “I will be proud to stand with the president through thick and thin.”

Fox News’ Gregg Re and The Associated Press contributed to this report.