California will play an outsized role in Democratic efforts to recapture the House in November. And the man accountable for delivering a blue wave in the Golden State — and across the West — is Rep. Ted Lieu, a rising star in the Democratic party.

In a strategic shift for 2018, the Democratic Congressional Campaign Committee decentralized power from Washington D.C. — delegating authority to regional generals. Lieu, who represents Santa Monica in Congress, commands DCCC West. “We moved the entire western region out to California because there’s so many seats in California that Hillary won,” he says, referring to seven seats that Clinton carried in 2016, but which narrowly elected GOP Representatives.

Anyone who follows Lieu on Twitter knows he has a dry sense of humor — but also a killer instinct. You can see it in Lieu’s management of congressional races: To keep Democrats candidates from getting shut out in California’s “jungle primary” system — in which the top two vote getters advance regardless of party — the DCCC deployed Rovian tactics, including sandbagging a star GOP candidate by running ads promoting an also-ran Republican rival — who later groused the DCCC had brought “tricks from the swamp in Washington to the shores of Orange County.”

Rolling Stone recently spoke to Lieu about the stakes and prospects for California — and the nation — in November.

Why does California matter for 2018?
California is immensely important. We need 23 seats to flip the House. We’re targeting nine seats in California, eight of which are on the Red to Blue list [of the DCCC’s top races]. That’s already more than one third of what’s needed to flip.

The DCCC spent millions to keep California seats in play in the primaries. Was that a good investment?
California has top-two primary that could result in two Republicans advancing to the general election. And that would have been a disaster for Democrats in the general election. So the D-Triple-C went to great lengths to make sure that that did not happen. 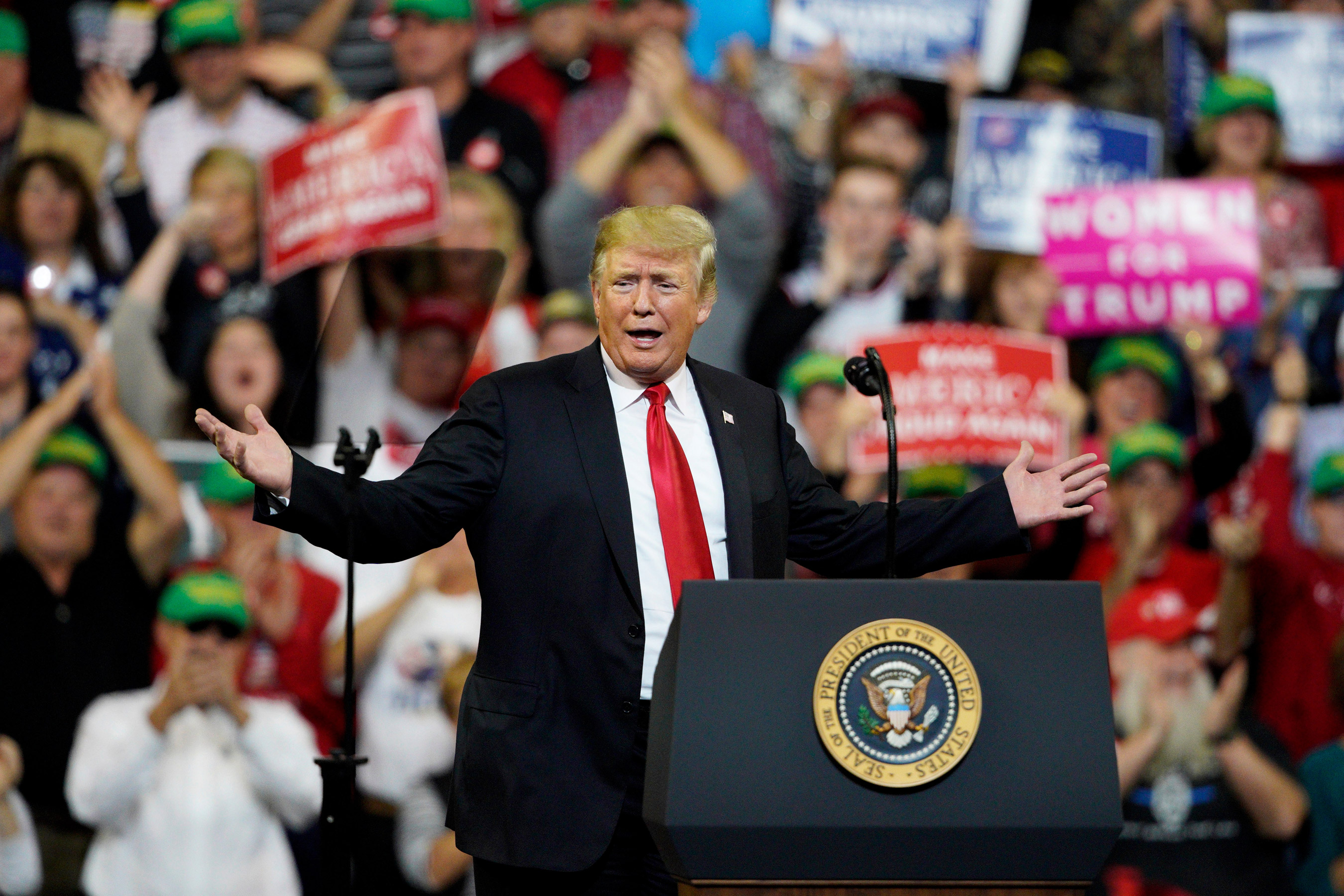 Taibbi: Trump Is Just One Player in a Much, Much Larger Tax Story

The GOP Is No Longer Fighting Trump’s Delusions

You guys resorted to dark arts —
In some of these districts, we did end up trying to make sure that the Republican voters would consolidate around one Republican candidate, so they wouldn’t split the vote evenly enough to advance two candidates. I’m not sure I’d call that a “dark art.” I’d just call that strategy.

With respect, you ran ads for Republicans.
It’s unusual…. In Dana Rohrabacher’s district, DCCC spent money helping Rohrabacher and attacking his Republican opponent. And despite all that Dana still only got about 30 percent of the primary vote. We knew from the polling that he’s a very weak incumbent and we wanted to run against him. Might not have happened if we hadn’t intervened in the primary.

You also intervened to help Diane Harkey move forward in the 49th district, North of San Diego — by attacking a GOP rival from the right.
Based on our research and polling, she’s a much weaker candidate than Rocky Chavez would have been.

How is California’s backlash to Trump is playing in the general election races?
California voters are very aware that the Trump administration has been disproportionately awful for the Golden State. It started with the tax law — the cap on the SALT [state and local tax] deduction raised taxes on millions of middle-class families.

Californians want to have clean air, clean water — not like the Trump Administration is trying to do with its rollback of environmental regulations, like the reversal of the Clean Power Plan. California voters are very sensitive to attempts to weaken emission standards for cars — California has about 40 percent of the alternative fuel cars in the nation.

Then the whole war on immigration by the Trump administration rankles a lot of Californians.

[For GOP incumbents] it’s a very toxic mixture — of not just a bad behavior by their president but actual harmful policies for California that were voted on by Republican members of Congress.

Talk about the decision to open a West Coast headquarters —
Let’s take it from a broader context: The reason that it’s harder to flip the U.S. Senate than the House, even though there are fewer Senate seats, is that you have all these red states the Democrats have to defend in the Senate. It’s somewhat reverse in the House: You’re actually have Republicans who have to now defend themselves and blue states. So we could actually not do that well in red states in November and still flip the House by simply winning districts in blue and purple states.

The D-Triple-C did something we never did before — moved our entire Western office out to Irvine, California in order to localize many of these races. In lot of these blue and purple state, you see enormous energy — and not just Democrats, but from independents and disaffected Republicans. And then you add in all of these organizations that have formed and want to help campaigns. That’s one reason it was very important to have a local office, to coordinate with these groups — to try to capture that energy by having more DCCC staff of the west coast.

So outside groups — like Swing Left?
Absolutely. Swing Left, Indivisible, Sister District and so on — that are very sophisticated organizations that have tapped into a lot of anxiety and anger toward the Trump administration. Swing Left had this amazing model where they collected a lot of money from people across America to give it to winners of primaries. They’ve given very large checks to many of the California candidates running for congress.

Indivisible has done amazing grassroots rallies, protests, town halls across California. Indivisible had a large effect in San Diego that helped nudge Republican Darrell Issa to retire earlier this year. Indivisible in the Central Valley invited me to Fresno; it turned out Devin Nunes had not done a town hall since 2011. I went to his district and did a town hall for him.

Democrat Andrew Janz, a local prosecutor, is taking on Nunes. What’s your take on that contest?
We know, based on recent polling, that if voters get enough information about Andrew Janz he could win the race. He does start out behind. It is a Republican-leaning district. But the district actually performs — in terms of how voters vote — slightly better than the district that Conor Lamb won. If we could win that district in Western Pennsylvania, we could certainly win this district in the Central Valley.

I traveled across California meeting with Democratic candidates. One Red to Blue candidate I missed was Josh Harder, who was off getting married. He’s running in Modesto, in the Central Valley. What should people know about him?
He’s an amazingly hard worker. I’ve called him a couple of times — both times he was actually walking door to door when I called. He is from the district. He’s rational and reasonable. And he is younger — can tap into the energy of millennials. He does not believe in separating children from families at the border. While his opponent —Jeff Denham — does say things about immigration that are not always the same as Donald Trump, in terms of actions they’ve been identical. So I think Josh Harder can present a very strong contrast in that district.

Is there a sleeper race you have your eye on?
We put Jessica Morse on Red to Blue. She’s done a fantastic job organizing, fundraising, getting people excited. [Morse is running against Rep. Tom McClintock, a climate change denier in a district that sweeps down the Sierras from Lake Tahoe to Yosemite.] But if you look at the California primary results, Doug LaMalfa did not do well. In a wave we could take that back.

This is California’s first congressional district — the far upper corner of the state, where Audrey Denney is the challenger?
Right. It is Republican leaning district — but you’ve got people there in agriculture who are very anxious about what Trump is doing with his tariffs. They also rely on diverse labor, and they don’t like to see the xenophobia coming out of the Trump administration. It’s a sleeper district – you might want to take a look at it.

In addition to your DCCC role, you’re also raising money directly for California Democrats.
I formed the California Candidates Victory Fund — a joint committee of nine candidates. At our very first event we raised over half a million in just one night — an amount of energy I had not expected. We’re on track to raise well over $1 million in a couple months.

Are you troubled by anything you’re seeing in GOP strategy? Republicans got a measure on the ballot to reverse a state increase to the gas tax.
Voters are smarter than Republicans think they are. They understand that Trump’s tax law was a bad deal. They understand the gas tax is a state issue that Congress had nothing to do with. It’s pretty easy for Democratic candidates: If they decide they don’t support the gas tax, they can just say that — and it takes it off the table.

What keeps you up at night?
One thing I am scared of is the unlimited amounts of dark money that Republicans have access to in terms of the Koch Brothers, Sheldon Adelson. There is a large pool of Republican mega-donors who can pump money into competitive races across America. Which is why we’re fighting back as hard as we can — making sure our candidates have the money to get their message out.

Trump May Relax Auto Standards While Making Them Harder to Meet

Councilwoman Strikes Back At ‘Cowards’ Who Posted Underwear Photos