Texas Republican Rep. Roger Williams denied on Tuesday that he shouted something about “throwing urine” at Rep. Alexandria Ocasio-Cortez, D-N.Y., during a heated exchange the liberal firebrand had with one of William’s GOP colleagues.

Ocasio-Cortez and Rep. Ted Yoho, R-Fla., were allegedly walking opposite ways on a set of stairs on Monday when Yoho called Ocasio-Cortez "disgusting" over comments she made about crime in New York City being propelled by the pandemic and poverty rather than a lack of policing.

The Hill reported that shortly after the two continued on their way, Yoho made the "f——- b—-" comment.

AOC CALLS ON CUOMO TO HIKE TAXES ON NY BILLIONAIRES: 'IT'S TIME TO TAX THE RICH'

"I never spoke to Rep. Yoho before he decided to accost me on the steps of the nation’s Capitol yesterday," she said. "Believe it or not, I usually get along fine w/ my GOP colleagues. We know how to check our legislative sparring at the committee door. But hey, 'b—–s' get stuff done."

Ocasio-Cortez also accused Williams of "yelling at me too, about 'throwing urine.'" 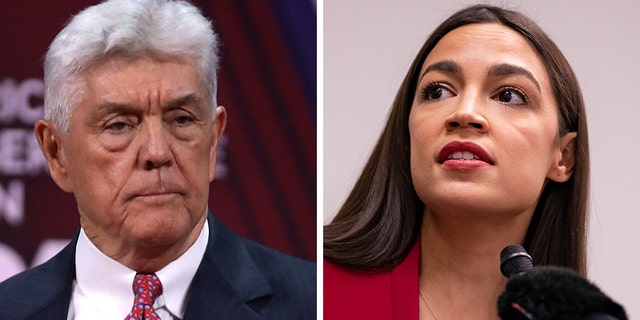 "The comments related to me were despicable," Hoyer, D-Md., said. "Unacceptable. Mr. Yoho owes not only the Congresswoman an apology, but an apology on the floor of the House."

He added that Yoho, R-Fla., was acting like a "bully. It was the antithesis to John Lewis. It needs to be sanctioned."

A number of the 30-year-old New York Democrat's colleagues came to her defense on Twitter after the incident became public.