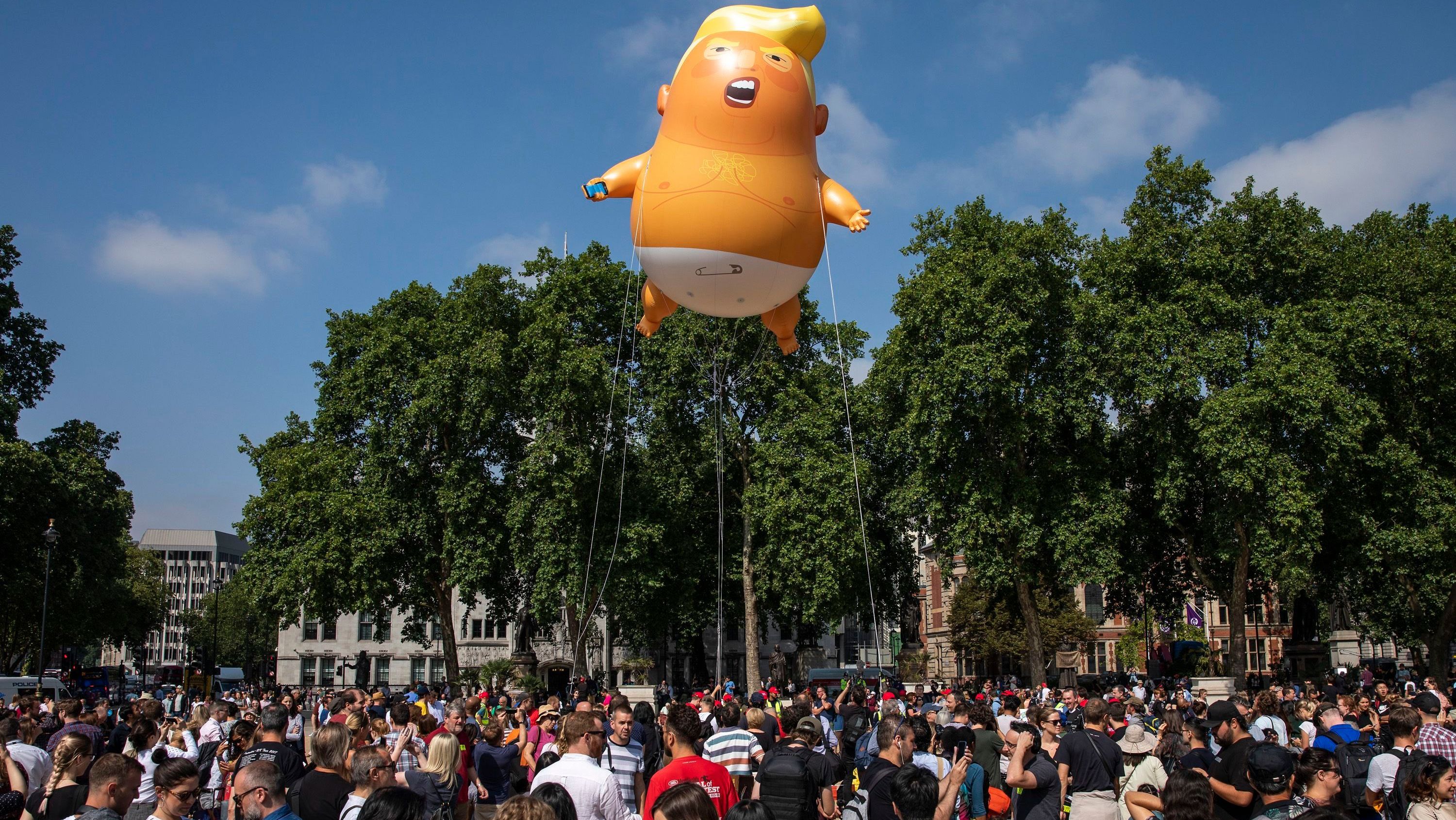 Thousands of protesters marched in London on Friday against Donald Trump’s visit to Britain, in what was shaping up to be one of the largest demonstrations seen anywhere outside the U.S. against the sitting president.

A much-ballyhooed balloon of Trump as a snarling baby in diapers flew over the houses of Parliament for a couple of hours, with hundreds of people cheering as it floated upward and organizers hoping to bring it to other stops on Trump’s tour of Britain, especially Turnberry in Scotland, where he will play golf at his resort Saturday.

On Friday, Trump’s official events were all set for outside London, away from the major protests, which appeared to be a concession to his famously thin skin. “I guess when they put out blimps to make me feel unwelcome, no reason for me to go to London,” Trump told the Sun tabloid. “I used to love London as a city. I haven’t been there in a long time. But when they make you feel unwelcome, why would I stay there?”

A pro-Trump demonstration in London has been scheduled for Saturday.

Trump met with British Prime Minister Theresa May at her official country residence, Chequers, on Friday morning. He and First Lady Melania Trump are scheduled to have tea with Queen Elizabeth II at Windsor Castle in the late afternoon.

Before his meeting with May, Trump had already dismayed her team by breaching diplomatic protocol and criticizing her handling of Brexit negotiations in his interview with the Sun. He also said a rival politician, Boris Johnson, would make a “great prime minister.” The comments infuriated some of May’s Conservative Party colleagues, including one who tweeted, “Where are your manners, Mr. President?” and another who chided Trump for diminishing “the standing of the great country he is meant to lead.”

The outpouring of public opposition against him on the streets of London was composed of two separate gatherings, a women’s march that began in the morning and a demonstration by the Stop Trump coalition scheduled for the afternoon. The protesters snaked their way through some of London’s most famous streets before converging on Parliament Square, next to the houses of Parliament and Westminster Abbey.

“Trump…has unleashed an absolute tsunami of misogyny and racism, and he has normalized the extremist forces in the world,” one protester told the BBC. “We need to show across the world that we are not going to stand for our women’s rights, which have been so hard-won and so hard fought for, to be demolished by a monster like Trump.”

The more @realDonaldTrump insults and undermines @theresa_may the more he enhances her credibility. #Trump is a guest in #UK because we respect the great office he holds. Yet again he diminishes the standing of the great country he is meant to lead #USA #TrumpUK